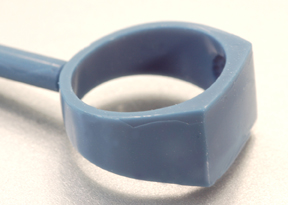 Jewelers are discovering the unique responsiveness of palladium in many standard manufacturing applications. While hand engraving is an art unto itself, graver work in some form is used at every level in jewelry making, including

The advantages of palladium manufacturing over platinum and white gold are compelling a significant number of retailers to consider ‘the other white metal’– not only from the position of pricing but also from the standpoint of production efficiency, service and maintenance.

The natural beauty of this white, bright and light palladium ring is enhanced with hand engraving of initials done in relief. 950 palladium manufacturing methods and techniques covered in this project are: 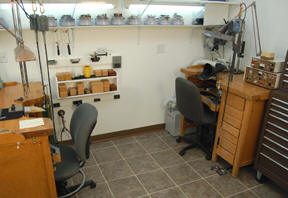 The process of preparing 950 palladium for the finished outcome is enhanced by the organization of materials and clean work areas. Always use clean, new abrasive materials whenever possible. Store materials used for pre-finishing properly by:

The 950 TruPd palladium for the signet ring weighed 7.44 pennyweight finished. The market price for palladium at the time of this writing was $261.00 per ounce or $13.05 per pennyweight without a metal suppliers mark-up. The chart below compares converted and actual weights of this ring if made in the following alloys: 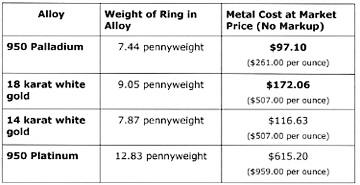 Notice that the cost of metal for producing this ring in either 14 or 18-karat white gold would be more than in 950 palladium. 950 TruPd palladium is alloyed with ruthenium and both are platinum group metals. 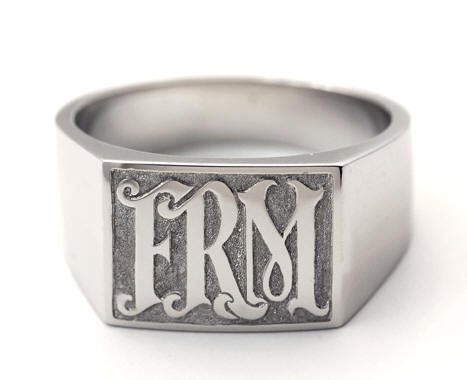 The following points detail some of the benefits (aside from the price point) of using new 950 palladium alloys as compared to white gold or platinum:

Casting for this palladium ring project was done by TechForm, Portland, OR. TechForm specializes in casting stainless steel, platinum and palladium for the jewelry industry.

Ganoksin is sponsored by
TechForm, Portland, OR. TechForm specializes in casting stainless steel, platinum and palladium for the jewelry industry.

The 950 palladium used in this project is TruPd™ from Hoover & Strong, Richmond, VA. TruPd is available in sheet, wire, casting grain and a range of findings.