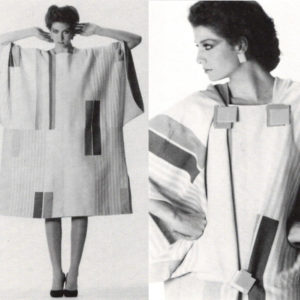 While this was not the first time that Ivy Ross and Robert Ebendorf have exhibited together, this exhibition showed clearly their diverse approaches: Ross’s jewelry relating to clothing and Ebendorf’s relating to wall collages. The new work displayed here represented a variety of unconventional media and techniques. However, though their imagery and concepts differ, their “evolutionary ideas” and energies are similar.

The first showcase at the exhibit was educational, showing both artists’ work in progress, from sketches to finalized rendering. These displays clearly demonstrated step-by-step experimentation with and construction of complicated units as they are assembled and transformed into jewelry.

The brooches in Ebendorf’s new series were surprisingly elongated—sharp linear forms of chopsticklike bamboo, embellished with mother-of-pearl, oriental papers, ivory, inlaid wood and 24k gold and silver foils. The carefully carved and shaped bamboo chopsticks are used as the main body of each piece, and drawings, paintings and collages are applied with subtle colorations and textures. Some of the brooches are three-dimensionally extended and have the feeling of oriental musical instruments or the Indian bow and arrow. Ebendorf’s precision as a goldsmith and his graphic sensitivity are evident in his brooch series. With a sense of discipline and order, he neatly and painlessly carved, lacquered and constructed unconventional pieces. They are innovative—seemingly poised for flight. 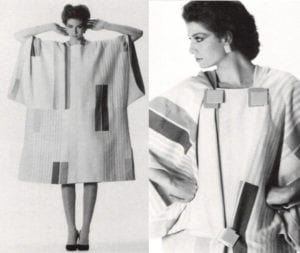 The same slender lines of feelings and forms were repeated in Ebendorf’s wall collages. The artist’s markings and drawings are carefully controlled with subtle textures on a white gesso background: fine combed wavy lines and soft colored pencil drawings, small fragments of seashells, papers and slates. The fragments of stones express “colors of the earth,” and various shades and sizes of the fragments create subtle changes of dimension and time. One intriguing collage used Japanese paper with writings and metal scribe markings on seashells and eggshell fragments. heightened with 24k gold foils. In other works, surface details were drawn on old stamps, computer tapes, mother-of-pearl, ivory and bone, The complex strata of these collages creates a three-dimensional illusion filled with memories and realities. These mosaiclike surface details are the primary elements of his collages.

Another group of collages employed cut-out and torn three-dimensional wall reliefs of photo-collage construction. Photo & Object wall relief has a 13 by 12 inch still life background to which a 2 by 2 inch framed unit has been added. Another unit, attached outside the frame, is an arrowlike slender projection, the same element we saw in the chopstick brooches. Adorning chopsticks with mother-of-pearl and abalone shell applied on lacquered surfaces is a well-known technique in the Orient. However, Ebendorf’s daring forms and approaches are very new to the American metal field. Further, adding 24k gold and silver foil to lacquered surfaces is new to fine jewelry and three-dimensional objects.

Ivy Ross’s new concept is a total image of knitwear and jewelry; the units can be worn alone or together. Her idea is to educate the public to coordinate garments and jewelry. She has created a limited-edition collection of six different machine knit garments, using 100% hand-dyed virgin wool, imported silk and Parisian cotton. The knits are expressionistic; Ross uses the body as a vehicle to enliven her visual imagery. 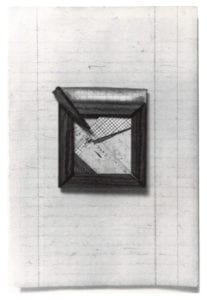 In the jewelry she combines diverse materials such as Formica Color-Core, plastics, titanium, niobium and tantalum with diamonds, amethysts, mother-of-pearl and ivory. These pieces have the same clean graphic patterns as the clothing. Ross uses the complex woven patterns of silk swatches from the 1920s to decorate her bracelet forms.

The concept of versatility was emphasized in garments by the addition of a removable cowl, knit in the same manner as the sleeves, to be worn around the neck or as a hood. Versatility was also apparent in the three-piece tubular dress, a striated tunic cowl, designed to wear front or back. Color Block, a full-shaped cream-colored dress, could be gathered into a slimmer silhouette by using Formica Color-Core pins, the geometric shapes and colors of the pin echoing the pattern of the garment. A scarf with removable pins represented Ross’s attempt to provide a complimentary background for the jewelry. In a second set of scarves colored titanium was woven into the perforated leather. These were meant to be worn like jewelry.

Ebendorf’s and Ross’s work is elegant, innovative, highly decorative and involved. These two artists do not hesitate to adapt and create challenging, nontraditional media and techniques. They are constantly searching for new art forms with a “jeweler’s sensibility.”