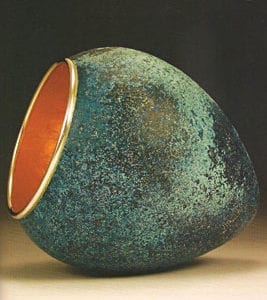 The Holloware of David Huang

What is the “hollow” in “holloware”? The ancient Chinese text Tao Te Ching tells us that what is absent from a thing can be its most essential aspect: it is the emptiness within a pitcher that makes it useful; and it is the void inside the walls that make a house inhabitable. [1] With much holloware, the inside of the piece receives little attention as a visual design element, although it often dictates the functionality of the object: by being watertight, for instance.

Yet the luminous vessels of David Huang teach us that the interior of a hollow form can carry potency far beyond mundane function, and that the interaction between the interior space and the exterior surface can resonate with the ancient duality of body and soul. Huang has found an entirely new kind of usefulness in hollow forms, and in doing so expands our understanding of both vessels and functionality.

Several disparate techniques and a clear personal philosophy came together over a period of years to produce these extraordinary pieces. Born in 1971 in Michigan, Huang settled on visual art as a career even before he entered high school. By his senior year, five of his six classes were studio art, and he was selling the jewelry he was making under the tutelage of his teacher Nona Bushman. The work was relatively flat, and meticulous renderings in his notebooks from that time show a marked preference for formal geometric structures paired with looser, organic forms.

As Huang began university metals courses, the designs increased steadily in scale and soon outgrew the size constraints of jewelry. About this time, he also greatly developed his abilities with chasing and repousse, which brought the depth of bas- relief to his work. Huang credits his metals professor Beverly Seley at Michigan’s Grand Valley State University with finally luring him into true three-dimensional design with raised vessels. She also introduced him to microcrystalline wax, which the sculpture department discarded as waste from bronze casting. The cost-free wax provided Huang with a more satisfactory support for chasing, and was easier to use than pitch, particularly as the size of his projects continued to grow.

In 1996, Huang fulfilled a furniture design assignment by combining spare wooden shelves, several four-foot-long chased panels, and live plants; this piece proved to be pivotal for several reasons. Logistically, he needed a way to hold the plants within the wooden structure, and realized that raised copper holloware would both support the ivy and visually connect the two elements. Against his instructor’s wishes, Huang deliberately concealed these significant vessels within the larger structure of the cabinet, believing that their importance lay not in their visible beauty, but in their service to the plants—just as roots are vital but largely unseen.

Producing the five vessels for this project sparked Huang’s interest in holloware, asymmetrical forms in particular, and led him to consider the qualitatively different space within a vessel’s interior. For Huang, raising offered an opportunity to approach that inner space on its own terms, independently from the surface or function of the vessel he was forming. It began to carry spiritual connotations for him.

In addition to honing his metalsmithing techniques, Huang’s passion for life drawing, which had begun with a fascination with line and the gestural expression of feeling, rapidly became more complex. He took the discipline’s premise of accurately conveying the model’s emotional state so seriously, that he overcame his profound reserve and even modeled for classes himself so he could grasp how hidden thoughts dictate posture and facial expression.

Huang also drew trees, focusing particularly on the trunk’s base and upper roots, the interface between their visible and invisible parts. Again, he tried to convey the relationship between two aspects of a living form, when only one can actually be seen. Nowhere in his extensive drawing portfolio are there conventional still lifes or landscapes. His preferred subjects all share a dualism of interior and exterior activity, of a hidden, supporting wellspring and its visible container, whose form is dictated by the nature of the unseen source.

Once Huang became intent on raising asymmetrical hollow forms, it was not long before his skills in chasing and life drawing insinuated themselves into the process. Working from his drawings and ceramic maquettes, Huang began an ongoing series of technically demanding vessels featuring integrated sculptural figures. It took a few failures to develop the right combination of tooling and techniques; the figures on the earliest vessels are more rounded than bas-relief, but only just. His most recent vessels feature lids with fully formed seated or standing figures, alone or in pairs.

Starting from an 18 gauge copper disc, frequently up to 18 inches in diameter, Huang begins angle raising in the traditional manner, hammering in a tight spiral from the disc’s center outward to compress the metal sheet into a conical form. He then isolates one or more areas and develops deeper hollows, and fills these with microcrystalline wax to support the metal while he refines the form with chasing tools. Huang creates the figures entirely from the outside surface during the hammering process, and the resulting figures are so smoothly integrated into the main disc that they appear to flow naturally out of their metal field. All of the raised figures act as lids for simple, symmetrical vessels, which serve both as plinths and as conveyers of Huang’s view that there is far more space within a person than on the outside. The forms rise from the hollowness beneath them, rooted in it, supported by it, and embodying a potential that would otherwise be invisible.

Although Huang’s initial forays into raising emphasized asymmetrical forms, he did pursue a parallel line of small symmetrical vessels. Almost none of these have flat bottoms or bases in the usual sense and cannot sit upright. Huang considered these lively vessels as individuals, and hoped their free motion on the display surface would encourage viewers to pick them up and interact with them. Most of them fit comfortably in one palm, and their ovoid or elliptical geometry allows the hand to relax around them. While he explored various patinas on these smaller vessels, Huang sought to demonstrate that the form’s interior was both significantly different from, and of equal importance to, the exterior. To convey his belief that the inner space housed each vessel’s unique spirit, he deliberately kept the interiors lighter in color. As the forms became increasingly enclosed and sheltering, Huang added highly polished silver rims to highlight the relationship between what lived within and the outer container.

In 2001, Huang finally hit upon a deeply satisfying way to emphasize the numinous quality of the interior: he gilded it. A few years earlier, Huang’s mentor Nona Bushman had given him a book of gilding leaf. At the time, the preciousness of the material made him wary about using it, so he tucked it away in his toolbox. Huang had always admired gold as a material, not only for its beauty, intrinsic value, and history, but also for how it was often used to lend spiritual significance to objects. The aesthetic success of his gilding experiment also had a practical advantage for an impoverished student preparing his senior show: he was able to double the prices of his small gold-leafed vessels. The gilded pieces sold immediately, and a local gallery asked for more.

Huang had already done some low relief chasing on the small vessels, and shortly after graduation he began to explore chased ornamentation intensively. There are no drawings of vessels, chased or otherwise, in his notebooks. He realized that the flatness of his jewelry and earlier work on panels was a natural result of their having been designed on paper first; the smooth skin of the vessels offered an entirely new set of parameters. He would lay out a few lines around the form in marker, then begin, allowing the design to emerge from the conversation between his skill, tools, the vessel’s nitial shape, and the properties of the base metal. His kit of chasing tools is surprisingly small: about 24 heavy steel punches that he made to fit his large hands. Six years and several hundred vessels later, he rarely knows how a vessel will look until it feels complete. In this, as in his patinated finishes, he controls only the initial conditions and then follows the lead of the tools and materials. No two are alike, although there are recurring patterns that appear in series, such as in the “Whorled Flow” and “Lucent Terrain” vessels.

Having already determined the value of gilding his plain vessels, Huang next applied the same technique to the chased ones, and in doing so discovered the rich visual and metaphoric power of the interior surface, where the play of internally reflected light across the soft arches and pleats inside the vessel created a luminous habitat for the object’s living soul, its genius loci. These vessels are not empty; they are inhabited.

Huang feels the small ones support spirits of their own, benign entities whose homes you can hold in one hand. When he made larger vessels, he found that the interior invited one inside, offering sanctuary and respite from mundane responsibilities and the relentless press of routine. That space becomes one’s own; for many it feels holy. Huang has created a new kind of hollow in his holloware.

Ganoksin is sponsored by
By Ann L. Larsen – © Metalsmith Magazine – 2008
In association with SNAG‘s