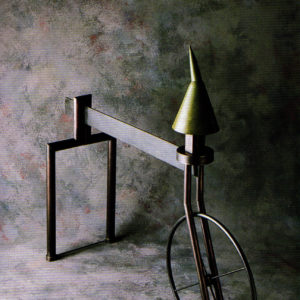 The confidential exploits of self-deception is the title of one of Louis Mueller’s recent six-foot-high wall pieces. This paradoxical attitude perhaps best describes Louis Mueller’s ongoing body of work, which is at once furniture and sculpture, wallmounts and body mounts, sleekly industrial and disarmingly vernacular. The following essay by Addison Parks explores the momentum and possibilities in the works of Louis Mueller.

There is a sense to this new work that something is about to happen. It is what Louis Mueller calls “anticipation.” It is the thing we experience in the work. It is as though when we see a particular sculpture, we have caught it in motion, interrupted its play and our presence has frozen it; we have stumbled in on it and it plays dead, only to carry on once our back is turned. We could swear it’s moving, but it’s not. Out of the corner of our eye it teases us; in a dead start it won’t budge. It is this sense of anticipation that makes the work move. Indeed, it is what makes Louis Mueller move.

With anticipation comes possibility, and that implies risks and the unknown – a built-in uncertainty, a kind of game. The game locates us in a set of circumstances to see what can happen. Louis Mueller creates a structure, a confine, a game, to allow something to happen – a few players, a game board, what’s the next move. Something gets set in motion, and the momentum keeps it going, changing, creating new sets of possibilities. How the shapes and structures of the sculpture move us through the work is very complex.

Each one is like a variation on a game, but is different, and the rules keep changing. The quality of the experience is altered by the various components, whose character and connection to each other determines the spatial and three-dimensional outcome of the work. It is a game of pure geometric form – hooked up to create a circuit of energy, a machine, a complete being. All of this is simply stated, resulting in an appearance that is quiet, elegant and charming. This couldn’t be more deceiving. The concision of the work masks a complexity that won’t sit still.

The look of the sculpture is cool, but it is not for lack of emotion. Despite the formality of its geometry the uniformity of its dark exterior and its hard and sometimes sharp edges and points, it has patinas that soften and warm the surface and produce an occasional bright color. The geometry is almost always foiled by some deviation, some awkwardness, some twist in the work, revealing a distinct and prominent trait that humanizes the machine. Even the possible impression that the work is emotionally restrained would be premature. The work respects emotions, yet refuses to indulge them. The feelings are there, but, like the work of the Constructivists, this work is as much pure feelings as pure form, with equal reverence for both. Emotion is measured thoughtfully, with a profound knowledge of how delicate and fine it is. It is perhaps the good fun of this work, the sense of play and mischievousness, that masks those feelings. Beneath the jaunty angularity of this sculpture is something enduring, sensitive and warm.

Each sculpture has a personality, determined by a particular sense of who and what it is and can be. And at the same time that the work is personal enough to risk being private to the point of exclusion, it responds in kind. It engenders a quality of mutual respect in this regard. It does not take liberties with the viewer. It respects the viewer’s space and sense of self. Instead of seeking to outright challenge, manipulate or change the viewer, it invites them to play. Instead of pandering to their emotions, sense of trend or correct social or political thinking, it seeks to engage them in an adventure. Instead of lecturing and imposing itself, it offers a space to just be. Rather than displace us, or even locate us, this sculpture provides the space for us to locate ourselves. This is one of the qualities of the work that is answering its time. Like it or not, it is the gift of a new age. 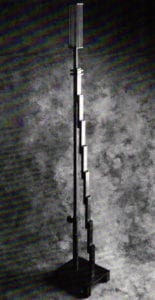 The work is benign in most respects. It is open despite its polite game masks. It is civilized to the point where it could rarely be militant. It is not armored or threatening but instead demonstrates a tendency towards domesticity and the pleasures of the mind. Objects represented in the sculptures as components of the game bear this out. These playgrounds have chairs, tables, ladders, cups, as well as one of the artist’s fascinations, the tools of the chemistry lab. The work has one thing, however, that is perhaps threatening, and that is its maleness.

A few of the machines become extreme in this regard. In many ways much of the work seems to reflect the awkward position the male finds himself in today. The size in particular suggests this. For so long men have made each other larger than life. As this work is about human scale, it looks small. The image of male and maleness is actually more vulnerable than threatening. Doubt and pain are present. Yes, the maleness is there in the work, but the erect posture is more a show of pride than strength. This is not so much something sexual or erotic as symbolic of something that has changed, something men have lost.

Soft spoken and intelligent, the voice of this work is poetic. Its arrangements are simple and short but full and complete like a poem. And yet, it is an arrangement without ever being arranged. It is a composition that instead results from choices made both internally and externally, from the unconscious, from a sense of possibility and from the very act of doing. For this it shares the spirit of jazz and Surrealism and has Modernism in general to thank for an unprecedented freedom of form.

A form that is more the vessel for the artists passions – sexual, emotional or intellectual – more than a playground for his games, but a form that is really the bones of the work, with the passions at its marrow. It is the structure which makes this work inside and out and for that it owes a debt to Minimalism. It is also structure that provides the framework for the space of this newest work, more space than Louis Mueller has defined to this point, a larger physical space to allow us more freedom of movement within the parameters of the work. This larger game, because of its size, allows us more than space for our minds but actual room to play. This makes the new work more of a playground than a game board, especially because it is freestanding, unlike the earlier work. 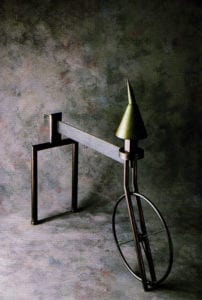 As it becomes more the Playground, the new work opens up and the openness of the space makes the work itself more accessible. The more physical and less precious dimensions mean that we can respond likewise. Furthermore, the possibilities become even greater on every level. We can play the more open-ended play of children, losing ourselves in the adventure of each sculpture as we take the time.

Finally, much of the potency of this work lies in its contradictions. Contradiction is the source of this work’s quiet and satisfying strength and the real depth of its pleasure beneath the stylish exterior. Foremost it is the work’s ability to suggest motion and be still. Then it is the way it is cool and transmits warmth. It is also its commitment to craft, refinement and polish that says at the same time it’s all really about fun. And then it is the abiding faith in pure form and art’s history tradition and convention that simultaneously thumbs an irreverent nose at anyone who would enforce the rules. Louis Mueller’s work is finally about itself.

A form of this essay appeared in the catalog of the recent exhibition of Louis Mueller’s work at the Helen Drutt Gallery, New York City. The 24-page catalog is available from Helen Drutt Gallery, 724 Fifth Avenue, NY, NY 10019 for $15 plus $1.50 postage (NY State residents add sales tax.)

Addison Parks is a painter and writer living in Providence, RI.