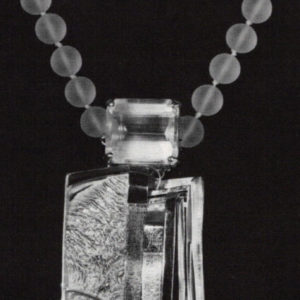 Translated into English, Korea means “chosen.” Komelia Hongja Okim, a native of Korea, has faced a great many consequential choices both in her personal and professional lives. Of these, one of the most important has been her choice of United States citizenship, enriched by the traditions of her youth in Korea as the foundation for her imagery.

The sense of balance and calm that has resulted from this decision was apparent in her 32 new works in jewelry at the Plum Gallery. The exhibit was neither distinctly Oriental nor American; it illustrated more the intimate response Okim has made to the two often divergent forces.

Beyond the exquisite craftsmanship and technical ability, Okim sculpts the metal to demonstrate both the conflict and uniformity she envisions as the central theme in her work. She landscapes silver and gold as settings for gems and titanium set as gems, building a multilayered playground for the eye, full of platforms of color and texture. 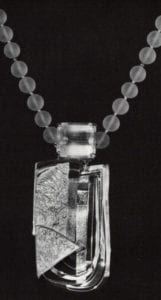 A ribbonlike flow of 18k gold shapes the neckpiece for the pin-pendant Spring, a regal setting for a large amethyst and several diamonds. A gently stair-stepped ridge of gold leads from the diamonds around the amethyst, bringing the viewer to the focal point of the work, and plunging the imagination into depths of translucent color. In Amethystvilla, a 14k gold pin, the German carved amethyst is a reflecting pool for the levels of gold encasing it. A section of the stone was carved out and tiny lines were inscribed to continue the graceful line of gold which appeared to extend into the gem.

East of the Sun and West of the Moon, a whimsical title for a necklace with a little something to please everyone, juxtaposes streamers of yellow and pink 14k gold with reticulated silver, sterling silver and a large yellow topaz in an abstract harmony of texture and line. The necklace is strung on frosted quartz and gold beads. 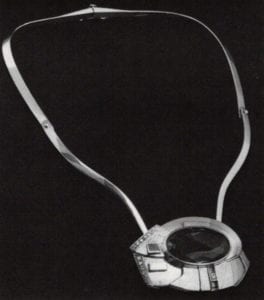 The jewel-like, almost opalescent quality of Okim’s titanium often resembles the abalone shells she also uses. The colorful bits of metal are set as jewels, suggestive of snippets from an abstract painting. The layering of sterling silver, 14k gold and titanium in Transition I, a pin-pendant, provided an architectural setting for ivory, wedged into the base, and for a delicate pink tourmaline, glowing softly as it caught the viewer’s eye. Oxidation and engraving enhanced the multidimensional quality of this construction, one of the best in the show.

Okim’s jewelry is elegant, beautifully crafted and easily wearable. The work is considerably lighter and less massive than much of her previous work. The constructions explore three-dimensional combinations of shapes where planes of metal and stone are juxtaposed for a well-proportioned sculptural look.