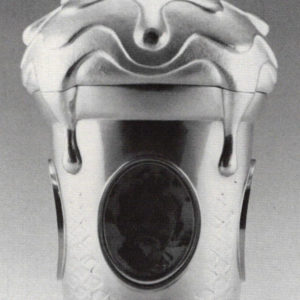 The silver objects of Lois Etherington Betteridge shone in an elegant solo exhibition of both holloware and jewelry, with the accent on the former, which just concluded a three-year tour of Canada. The work spanned the last 10 years of an already long career and conveyed the gradual progression of an ever-so-slightly baroque freedom. The baroque, however, never quite overrules the initial class sobriety of her work.

As to style, a taste for intricate yet almost “natural” ripples flows through several of the most beautiful pieces, notably the masterly Spice Shaker. Also characteristic is the way in which silver is successfully combined with other noble materials such as ebony, horn or stone. My favorite examples of this are the Brandy Snifter with its antler stem superbly inset with sterling, and the small ink bottle crowned with an ebony stopper. Among Betteridge’s distinctive traits is also a certain teasing humor, particularly in the most recent works, including Ice Cream Cone, Pill Tube with Lips and Tot Cup for an Insomniac. 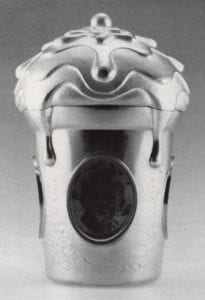 Yet a deeper, more important originality emerges on analysis of the whole body of work and on comparing it with contemporary production in general: While Lois usually makes objects with a function and seldom succumbs to the common temptation of creating abstract “sculptures” of a supposedly higher artistic stature, she cannot, on the other hand, be described as a fabricator of “designs.” The concept of design being so linked to functionality since the Bauhaus, one might expect her concern with function to lead to design work. In fact, though, she generally produces one-of-a-kind objects with a function, which evolve as marvelous works of art, not because of any pretentions to usefulness, but because of the successful integration of either straightforward or ritual purpose with surprisingly tree expression and absolutely stunning technical beauty.

These last three points—the trend towards abstract craft, the trend of modern design, the alternative expressionism of the work of Betteridge—bear further consideration. In my opinion, there exists no hierarchy between art and craft other than that engendered by cultural prejudice or that of an individual artist’s intelligence. Traditional oriental cultures, for example, do not consider the art of pottery to be inferior to that of painting; they only judge some pottery to be inferior to some painting, and vice versa. In contrast, western hierarchical segregation of arts has recently led a number of ambitious and accomplished craftsmen to attempt escape in the direction of the conceptual. Not surprisingly, the results of such efforts have often been disappointing, being artificial in their intention. This exodus is especially inappropriate just now because we need a renewed integration of art and life, and craftsmen should be particularly adept at this. Why then should they now depart in a direction which has been “modern” for the past 80 or 90 years, and which, despite its breakthrough in some respects, has quite obviously failed to maintain communication between artists and their public? While admitting that the trend to the abstract is still one favored by the establishment and is therefore endowed with certain benefits, I for one do not believe that the best creators are motivated by such incentives. 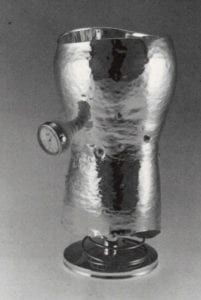 Design for its part, has also been a “modern” value since the beginning of this century. It has come to be synonymous with simple, often ingenious, flowing lines, well adapted not only to function but equally importantly to industrial reproduction on the assembly line. Hence the very successful streamlined forms of chairs, lamps or whatever with which we have all become familiar, but at the expense of an inevitable loss of individuality. Nevertheless, modern design does deserve credit for at least being democratic, since it has, in contrast to contemporary abstract art, become very much a part of everyone’s life.

Returning to my third point, and the work of Betteridge, it seems that she largely resists both the flight into abstraction and the extra simplicity called for in potentially commercial design. I say “largely” because, interestingly, the exhibition did present a few examples of commercially oriented designs, such as stately pewter goblets. However, the vast majority of her compositions in silver displays a complexity and unpredictable fancy which would not comfortably lend itself to mass production. They are not rationally planned ahead, but rather have developed spontaneously from the initial idea, very much as paintings do. This allows for the rich irrationality of true art. By irrationality I mean that part of genuine thinking which evades consciousness: the freeing of other ways of thinking, since thinking is after all mainly a relation-making process.

I believe there never is really great art without the free play of what has been called, rather unscientifically so far, “instinct” or intuition: that deeper, hidden, thinking part of us which we do not control but which we can learn to invoke and trust, as Lois Betteridge obviously does.