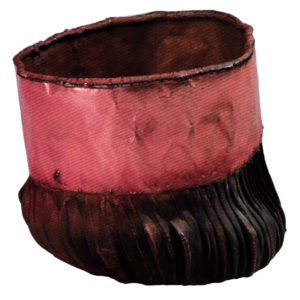 Vessel and vesselmaking come the closet to establishing a universal language form; encompassing ceramic pots, holloware, fiber baskets, glass and wood-turned bowls, they are common to all media. In this focus on June Schwarcz’s new vessels, Vanessa Lynn examines how the well-known enamelist plays with ambiguity and contradiction, adding to the language with semantic twists of material and technique.

June Schwarcz continues to defy the potential limitations of the enameled vessel. She has spent over 30 years refining a complex array of metalworking techniques, with confidence and freshness, combining them in vessels layered with expression and content. The point of this layering is to force themes of opposition. In color, texture, form and/or technique, Schwarcz pairs the seemingly estranged – setting one against the other – in an effort to reexamine preconceived ideas as well as those previously rejected. It is from these oppositions that Schwarcz’s work may be seen to draw much of its stamp, and its strength. 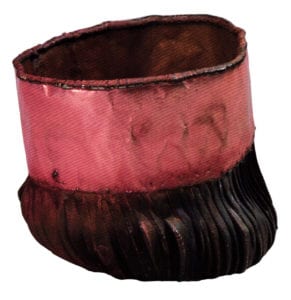 Vessel 1030 is deceptively simple, with engaging formal dichotomies. Its upper third is a collar of copper sheet; its squat, lower body consists of individual, iron-plated strips that have been stitched to the bottom interior edge of the collar. Their length appears to span the vessel’s base. Although the collar is visually and physically light, it is given the illusion of great weight by appearing to be responsible for the dominant tilt and sag of the vessel’s bulbous base. The individual strips that comprise the lower body bulge, stretch and strain from downward pressure, freezing in mental the shape’s momentary distortion.

In playing iron’s malleability against its tensile strength, Schwarcz brings to mind paper jack-o’-lanterns and plaited baskets. But, endowing iron with such startling ephemerality is only the first kinesthetic assault. In silhouette, the angles produced by the collar’s compression create a startling sense of movement and lift. With one side stretched upward at 45 degrees, and its opposite side suggesting a crouch, the vessel appears poised for propulsion, defying the weight of its iron and copper mass. 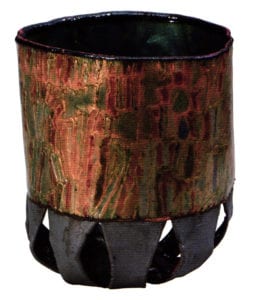 Surface effects continue the dichotomies. The controlled, transparent glazing over foil augments the lightness and delicacy of the collar. The salmon-colored enamel plays on the peaks of the foil, transforming the surface into a subtly shimmering, jeweled crown for the swaying body below. The steady modulation within the single color coaxes even more tones from the rusty patina that encrusts the iron strips just below it. By marrying the incongruous – transparent enamels with electroplated iron – Schwarcz elevates the beauty of metal’s decay, as it compares with traditional notions of preciousness.

Schwarcz closes this particular dialogue by cladding the vessel’s interior in an unappealing brownish shade of green. Just as eye and hand are drawn to contradictions of the exterior, so, too, the interior attracts despite its initial ugliness. The tilt of collar and lip, the seductiveness of the smooth surface, are all part of a complex strategy to get the viewer to reevaluate any cursory judgments. Schwarcz orchestrates the flow of enamel colors to enhance and transform each other, making us see nuances normally disdained. 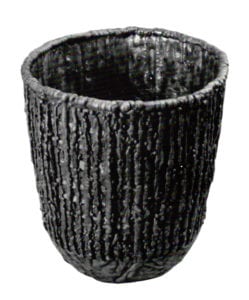 Recent work continues this theme. In Vessel 1036, for example, the delicate tracery of the plique-à-jour surface is made to converse with sandblasted iron. The refracting, dissolving plane of an etched, bas-taille enamel cuff is paired with the gray solemnity of an iron-plated base.

Suddenly, the rough-faced iron becomes a structure and surface with its own stark beauty. The unexpected juxtaposition coerces us to reevaluate the figure-ground relationship, interior and exterior, in something previously assumed to be unexceptional. The enameled cuff is also rethought, becoming precious beyond its skillful execution. It gains stature through our realization of its ability to endow the mundane. The rectangular repetition of its enameled pattern serves as a metaphoric window on the possibility of fresh insights.