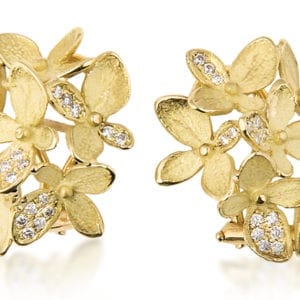 Editor’s Note: If we are what we eat, then are we whom we wear? While wearing your own jewelry designs is a great (and free!)way to market your work, it may not always make sense or be practical. In this occasional column, we ask designers about the jewelers whose work they like to wear. First up, Barbara Heinrich of Barbara Heinrich Studio in Pittsford, New York, discusses why she favors the designs of John Iversen of J.Iversen Jewels in East Hampton, New York, when she’s not wearing her own.

While chance brought Barbara Heinrich and John Iversen together, a shared artistic sensibility, with a focus on the unexpected, and love of nature moved them to remain in touch over the decades. Heinrich first discovered Iversen’s work33 years ago in a gallery that carried both of their designs. She was struck by the playfulness his work conveyed. “It spoke to me,” she recalls. Although the details of their initial meeting are hazy, Heinrich says that it led to a friendship that has lasted for many years. 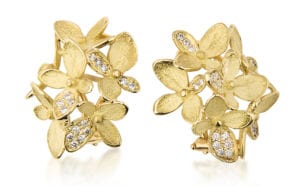 During that time, she’s traded for and bought several pieces of Iversen’s, including a pair of hand-wrought 18k hydrangea earrings. She was drawn to the jewelry’s heightened attention to detail that distinguishes Iversen’s work from that of other “nature” designers. Each earring is constructed of meticulously detailed clusters of hydrangea petals, incorporating the organic forms and surfaces into the design.

“His work shows a lot of sensitivity to his materials and subject matter.”

According to Heinrich, Iversen’s pieces are intricate and true to life. However, she makes sure to point out that Iversen interprets nature in a way that doesn’t verge on replication. He does so through a combination of the painstaking methods he uses to achieve authenticity and an innovative point of view. For example, Iversen casts an imprint of an actual leaf or petal to ensure that his design is as close to nature as possible. But then, he adds a personal touch, arranging the leaves in a way that reveals his superb sense of composition and proportion, says Heinrich. It’s his ability to know how to display various elements on a design that makes Iversen’s work stand out for her.

Since nature is rarely perfect, Iversen has been known to hint at her flaws in his pieces. Heinrich cites his attention to a torn leaf, whose beauty he finds in blemishes and imperfections. “He processes that which he picks up.” Because of Iversen’s insistence on inclusion and truthfulness, she feels that “his work shows a lot of sensitivity to his materials and subject matter.” 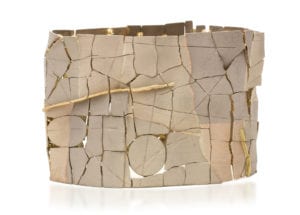 Fissured, fluid and flexible,
the result is unpretentious elegance

While Iversen’s initial depictions of brokenness had surfaced a couple of decades ago, Heinrich thinks that the theme was a precursor to that of fragmentation, which dominates Iversen’s current designs. In particular, this is evidentin the gold and silver bracelets hecreates now; they look like 3-D collages that are made out of joined pieces. Because there is no frame—Iversen hooks and solders the fragments with gold—the bracelets mold to the wearer’s wrist. Fissured, fluid, and flexible, the result is unpretentious elegance.

No matter what direction Iversen takes—be it his early foray into colorful, geometrical enamel work or his later organic pieces—Heinrich is drawn to his original aesthetic, saying, “It always surprises me. It’s just fresh.” While their source of inspiration is the same, their language of expression is quite different, she believes. Heinrich points out that, as a designer, she likes to be aware of what others are doing, but stay her own course.“Every piece I make needs to reflect my aesthetic. It wouldn’t be good to be too close in style to another designer.” 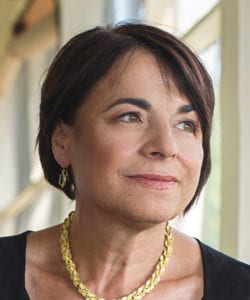 Instead of emulating the designer she respects, she chooses to honor him by wearing his jewelry. When she puts on one of his pieces, she says, “I get a lot of positive feedback and always give him the credit.”