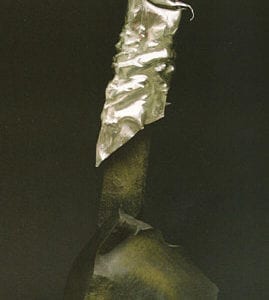 John Marshall – The Birth of Time

John Marshall’s position in American art is an awkward one. His sculptures of fine silver with acrylic, Corian, wood, and basalt are larger than the ornamental metal objects usually associated with silver.

At the same time, they are smaller than the over-scaled, not to say monumental, size the rest of contemporary sculpture has occupied over the past few decades. (True, Marshall executed a series of site-related liturgical commissions, but they should be the subject of another essay.)

Trained as a metals artist at the Cleveland Institute of Art, and later Syracuse University, he was most recently head of metals at the University of Washington (he retired in 2001). Mainly working from private and public commissions, Marshall was absent from the art gallery scene for a long time. His unique projects, including 14 sculptures using precious gemstones for a former Apple executive in California’s Silicon Valley, were completely different and unexpected. Critics and sympathetic curators have not always known what to make of them.

In a 1991 Metalsmith interview, former Seattle Art Museum curator Patterson Sims asked Marshall, “Would you say you were a metalsmith, a sculptor, a maker of functional works, or a craftsman?” Marshall bristled, responding that the very question “irritates me,” and continued: “Whether you like it or whether it goes in a history book, I could care less… For someone to ask me whether I want to be a sculptor, jeweler, or metalsmith is, at this point, foolish. I think I have enough of a reputation that I can do what the hell I want to do.”‘ To be fair, Sims had earlier in the interview disparaged Marshall’s sculptures, telling him, “I’m more impressed by the functional pieces than… by the sculptural pieces. Your sculptural pieces seem to be too frozen by conventions of the 1950s and 60s, whereas your functional pieces seem to be able to transcend tradition.”

That Marshall did not follow trends that Sims was conditioned to respect (Minimalism, Postminimalism, Conceptualism, etc.), and that, perhaps, Marshall did indeed follow “conventions of the 1950s and 60s” must be admitted. (He’s professed to admiring Henry Moore more than any other sculptor.) However, when Marshall’s sculptures are placed in a room of their own (as they were in the home of his greatest patron, the late Patrick Lannan) rather than shoehorned into Sims’s New York-centric art world, they make more sense. Like any other serious art, they may operate on both symbolic and metaphorical levels. Receptive to analysis and interpretation, Marshall’s sculptures can open the doors of perception onto a fascinating internal world, even a “universe” as one curator called it,’ wherein materials act in both art and craft dimensions. Indeed, Marshall’s painstaking craft and the fact that he spends up to two years on one piece suggest that the key uniting element in his work in terms of meaning and process, is the birth of time.

Leaving aside the commissioned coffee services, flatware, chalices and baptismal fonts, and other more socially rooted artworks, let us concentrate on a few of Marshall’s sculptures, from his first all-silver pieces to those that combine acrylic as a stand-in for glass or ice, and on to more recent silver-and-basalt sculptures, exhibited last fall at Seattle’s William Traver Gallery.

That Marshall has been more difficult to situate as a sculptor than, say, Albert Paley, has to do with scale, materials, and content. Much of Paley’s art, by comparison, involves the wholesale reconfiguration of nineteenth-century European decorative arts history. With models like Art Nouveau and Vienna Secession sufficiently distanced from the present, Paley has openly revealed his tracks (to those aware of such roots) and concealed them (from those seeking non-threatening corporate and public art). Because Marshall uses silver, decorative expectations run high.

How could silver, with its ornate historical baggage, be considered a serious sculptural material? When we seek historical examples of anything approaching mid- to large-scale silver sculptures, all roads lead to the Renaissance or the American Gilded Age: commemorative trophies for the landed and lettered elite. This is not a good omen.

Determined to expand silver’s potential for expressive and meaningful sculpture, Marshall began with Aurora (1983), a solid- silver, die-formed four-foot square evocative of dawn, the beginning of the day-the birth of time. Indeed, as things transpired with Lannan (who went on to commission six more sculptures), primal origins of time and, in turn, earth, light and matter, began to preoccupy the artist. These propensities were discussed at length by one of the more percipient of Marshall’s critics, C. E. Licka, who, writing in American Craft in 1985, closely scrutinized the Lannan commissions (now in the collection of the National Museum of Ornamental Metals) in a broader intellectual context. Licka wrote, “Time seems momentarily frozen… lines, edges and folds slowly emerge.”

Marshall considers Growth Cycle (1991) his first serious sculpture to enlist silver and acrylic. Combining chasing and repousse techniques on an open-topped silver form, Marshall used the lower acrylic support to mimic geological phenomena he saw during a crucial 1978 visit to Alaska. Still a vessel, but with separate silver and acrylic elements, Marshall introduced transparency, but failed to fully integrate his new marriage of materials.

Among the gemstone “settings” done for the computer mogul Michael M. Scott, Marshall made breakthroughs that later led to a more fully blended fusion of acrylic and silver. In Serpent (1991) and Organic Cube (1992), time is not frozen, but witnessed in action as a tremendous interaction of earth-based forces.

Writhing above a chunk of California tourmaline, a serpent-like swath of layered copper and silver, also known as mokume gane, rides the upward thrust from the cracking silvered earth below. Marshall’s closest link to figuration, Serpent is still tied to the birth of time, and the microscopic, snake-like organisms like planaria present before the dinosaurs, at the dawn of the planet. Organic Cube’s kunzite spodumene crystals blast through a flat silver ceiling.

By accepting the Scott commissions, Marshall backed himself further into a dangerous corner. Museum exhibitions temporarily replaced gallery shows. How could the art world accept the use of jewels in serious sculpture when, throughout the 1970s and 1980s, dirt and dust were often the privileged media?

Returning to the pedestal in his recent Seattle exhibition, Marshall embraced yet another conundrum. What could be more passé than pedestal sculpture? Neither earthwork-scale installations nor intimate icons, Marshall’s eleven new sculptures even include one that sets a Corian base atop another pedestal base. Without subverting any of the formal issues that important contemporary sculpture attacked over the past two decades-scale, positioning, support, site-Marshall has dug in his heels, followed his own cosmological bent, and left Sims’s question forever dangling.

With more scoring on the acrylic than before, Just the Two of Us (all new works are 2007) better integrates the silver and plastic. Dealing with basalt this time, the ubiquitous volcanic, igneous rock throughout the Pacific Northwest and Alaska, Marshall returns to the birth of time as a theme. However, despite the better melding of stone and silver, the frequent division between upright silver and downward rocky base lends a tiring familiarity to pieces like Above the Clouds, Sleeping Together, and Horizon, the latter a revisiting of Serpent’s lateral crawl over a supporting base. Landscape is more evident in Above the Clouds, with its silver “cloud” and chipped, two-part rocky “mountain range” below. The stone peak of Summit is wrapped in a sheet of silver that unfortunately suggests a metallic foil condom adorning a phallic shaft.

As Meta/smith readers know by now, a little mokume gane goes a long way. Marshall has used its intricately patterned surface to accentuate a folded cloth or kerchief look in works like Cloak. Allusions to origins of time are replaced with bravura material illusionism, so often the fallback position for American crafts masters.

Not really known outside the sphere of craft, Marshall’s achievement deserves greater art-world recognition. Setting himself extraordinarily high standards of execution, where can he go next? Glass, instead of acrylic, is one obvious direction in the Pacific Northwest. Anodized, colored metal would be another (Marshall has never addressed color beyond patina). And, finally, in an extension of his submersion in the birth of time or the “freezing” of time, different stones besides gems and the uniformly gray-black basalt could lend variety and instigate compositions beyond the use of stone as a support.

Would all this be too decorative? Too dangerous? With his pathblazing indifference to what others think sculpture should be, Marshall need not worry.

Seattle-based Matthew Kangas is the co-author of the new book Shy Boy, She Devil and Isis: The Art of Conceptual Craft/Selections from the Wornick Collection for the Museum of Fine Arts, Boston.