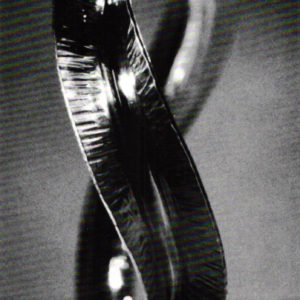 The following is an excerpt from the text of the catalog of “The Founding Masters Exhibit”, held at the Schick Art Gallery of Skidmore College, Saratoga Springs, NY, guest curated by Kurt Matzdorf under the directorship of Professor David Miller

The exhibit opened during the Society of North American Goldsmiths conference in June and remained at Skidmore during July. Since an illustrated catalog was produced to accompany the exhibition, we present here only a few of the newer pieces submitted to the show.

In November 1968, at the urging of Philip Morton, nine master gold- and silversmiths met in Chicago to plan a national conference and metals exhibition. After about one-half hour most of us agreed that creative gold- and silversmithing in North America had reached a point where more was needed than a big national exhibition. We envisioned a permanent organization that would let us share information, ideas and problems that we were encountering as artists, craftsmen and educators. Additional names of colleagues sharing our concerns were mentioned, and nine of those invited were able to join the “steering committee” in Boston in January and in Washington, D.C. in October, 1969.

We all felt that it was our task to raise substantially standards in both design and craftsmanship over those then prevailing in the field. Many of us were members of university art departments and accustomed to providing artistic and educational leadership. However, being fully aware of the dangers of the academic “ivory tower,” we felt we needed the participation and expertise of those creative masters in our field who made their living exclusively from their own businesses.

Many hours of discussion, heated at times, produced the constitution, bylaws, membership criteria, exhibition programs, etc. that resulted in the launching of the Society of North American Goldsmiths at the Minnesota Museum of Arts in St. Paul in March 1970 with the “Goldsmith ’70” exhibition. The level of idea generation and the vitality displayed in the work shown was exhilarating and augured well for the future of the organization.

Since then, we have had conferences all over North America, exhibitions throughout the United States, Canada and Mexico, and a traveling exhibition through Europe. Members have researched, read and demonstrated innumerable technical papers. Our information service began with Gold-dust, which became Goldsmith’s Journal and has now become Metalsmith magazine, supplemented by the SNAG Newsletter. The flourishing of the organization is largely due to a succession of enthusiastic and devoted presidents and board members who have given generously of their time. 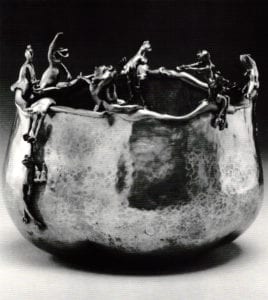 Most of the running of the organization has now passed from the founding masters to the next generation of master goldsmiths. The founding masters have continued their quest for perfection in their workshops, constantly trying out new ideas, perhaps driven by the famous dictum of that greatest innovator of modern times, Thomas Edison: “There must be a better way—go find it!”

Holloware is not dead; it’s just reawakening. With the recent shows—”Holloware ’87” at the Tower Fine Art Gallery, SUNY at Brockport and “Silver in Service” at the Castle Gallery, College of New Rochelle, there is evidence that the intellectual vigor of silversmithing has not abated. Notable works are being produced by young and old alike, some rediscovering the process, function and concepts of holloware’s tradition; some coming to them with a fresh eye.

Tom Muir is one such member of the younger generation of silversmiths who is taking provocative chances with holloware’s esthetic. Muir’s influence can be traced back to Alma Eikerman and the “Indiana School,” as he was introduced to the genre by Richard Mafong (an Indiana graduate) at Georgia State and then took graduate studies with Leslie Leupp and Randy Long at Bloomington. Eikerman’s approach, as evidenced in Muir’s work, is based on the concept of ‘vitalism,” first applied to the sculpture of Henry Moore. The expression of holloware for Eikerman is abstracted from nature by infusing the work with pent-up energy, independent of the subject. The vitalism, or life force, resides in the volume of creation; the form contains the energy.

Following Eikerman’s lead, Muir explores the inherent conflict between the mysterious energy trapped within the vessel and the manipulation of the skin that takes a recognizable shape conditioned by the functional requirements of the piece. In Cycladic Figure Impregnated with 20, the customary elements of handle, lid, foot, etc. articulate the object’s desire to be a pitcher, while the bulging belly that contorts the overall shape suggests that there is something inside of equal importance. The vessel’s force is being determined by the vitality of what is contained: literally, it is the liquid, and, metaphorically, it is the artist’s energy.

In Figure Vessel, the life force is associated with nature’s rhythms. The sluglike form is animated, conveying its potential to lie down and slither about under its own volition. The question raised by Muir’s work is whether holloware’s sculptural possibilities derive from the inside or the outside of the piece, whether the creative process pushes the skin outwards or whether the skin is raised to envelop and calm the turbulent atmosphere of its interior space. Where does the true character of holloware lie?

Muir has furthered his investigation of contained energy in his use of mechanistic contrivances coupled with holloware’s traditional organicism. A naturalist by disposition, he understands and appreciates nature’s logic. However, the manmade environment is of comparable interest to him by virtue of its own unique manifestation of vitality. In their unpredictability, mechanical constructions appear threatening, dangerous and mysterious.

Nevertheless, they are normal components of traditional holloware, since, functional, hinges and handles must be reconciled with the fluidity of raised forms. But for Muir, they also offer sculptural analogies, as they derive from the energy in both their imagery and function. Muir’s lamps and constructions—Wired Rock Star—offer the essence of holloware as energized space. While his compositions become more abstract, merely drawn by linear elements, Muir is still confronting holloware’s mysterious attraction of containment.—SB 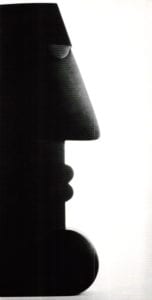 The expressive line that controls the features of her vessels derives from the cut-and-lift process in fabrication. Her father, Jack Prip, had discovered this linear element in Shaker boxes. He looked to these models not for the austerity of form but for the one decorative element that commanded their presence, the seam. 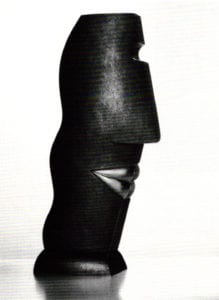 Although a necessity of construction, for Jack, and also for Robin Quigley, the seam became the focus of their boxes, the line meandering about the lid, provocative in the manner of its visual and tactile relief. 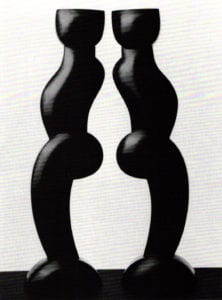 Janet Prip has further isolated the interpretive possibilities of fabrication, incurred by the sharp focus of edges. Her vessels deviate from the sculpture-in-the-round of traditional holloware or container forms, as their orientation is clearly two-dimensional, front and back. The contours that mark her planes serve not only to frame her vessels but also to draw the outline of her portraits. 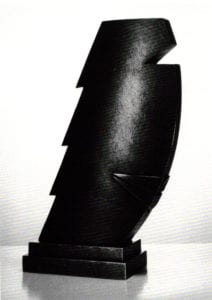 Janet Prip’s anthropomorphic vases stand independent of the logic in raising techniques. Made from bronze and pewter, they appear chiseled rather than modeled, cutouts employing negative space and truncated volumes. These desultory figures in holloware are shadowy images of human nature, hinting at an apparent emptiness within.—SB 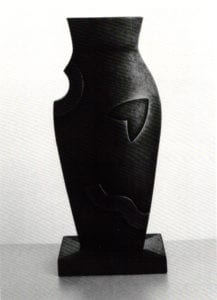 Janet Prip’s work has most recently been shown at The Hand & Spirit Gallery, Scottsdale, AZ and at the Gimpel & Weitzenhoffer Gallery in New York.

Never considered a material worthy of virtuous technique, pewter continues to have a special value for metalsmiths. Ideas, for the plastic artist, are only made real in production. Working in precious metals that risk time and expense demands austere forms to free the maker to concentrate on execution. The pressure put on the object is one of distillation rather than extrapolation. The long process of personal experimentation must yield to the singular object whose elapsed time of production transverses the changes in the artist’s personality and intuition…not so with pewter. 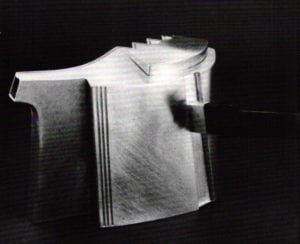 Over the last few years, Michael Jerry has been immersed in architectural analogies for holloware, using pewter to execute a series o[ forms that build upon common themes. The cubist distortion of planes, facilitated by the properties of pewter, characterizes discrete volumes, individual parts that are engineered in a variety of configurations. The individual segments are joined (welded, soldered) in an articulated fashion, where parts relate independently of one another, i.e., spout to handle to lid. 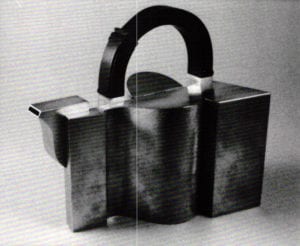 On one coffee pot the spout appears freestanding, like a chimney; on another it appears as a decorative element of the facade. The surface of pewter complements the feeling of mass rather than volume, of structure and elevation that responds differently to the contingencies of light.

The diversity of forms occasioned by working in pewter offers the possibility of an expanding audience for functional holloware. Once the stigma of a debased material is overcome by creative activity, pewter’s economy of means could prove to be a catalyst for the renewed appreciation of the genre’s value in expression. Michael Jerry’s jewelry work is currently represented by Neil Isman Gallery in New York.—SB

Forms for thought and sometimes function

Susan Ewing’s holloware works in copper, silver, brass and nickel are not only finely crafted but strong metaphorical suggestions as well. Although Ewing calls these pieces Forms for Thought and Sometimes Function, I am not so sure about the declaration of function in the traditional sense. At first glance, her sterling silver Two Forms for Cream and Sugar would seem an elegant addition to the table. 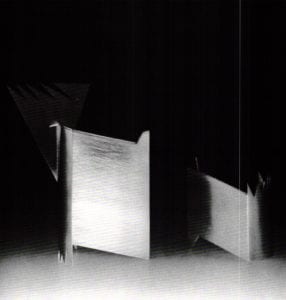 Upon closer inspection, however, the spikes on these pieces do not seem particularly user-friendly but actually dangerous. Perhaps these are for dieters? The lid of the sugar container is hard to grasp and the interior could not accommodate much sugar, let alone a standard teaspoon. The creamer did not seem capable of holding much cream either. Indeed, these must be viewed as curious, beautiful wonders for a table of the imagination. 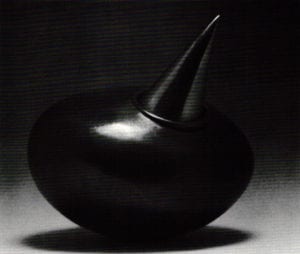 Equally evocative are the sculptures Thorn with Form and Form with Roe. Ewing’s mastery of her materials is evident in her confident handling of surfaces and glorious patinas. The use of more than one metal is enhancing rather than merely embellishing. Again, though, it is the ability of these pieces to take the viewer beyond an admiration of the craft and form wherein their true power lies. In what strange land did these “specimens” grow? Sexually charged, mysterious and compelling, these pieces seem like products of some extraterrestrial garden, a place worth visiting but certainly not if one were along at night.—Mary Hamilton 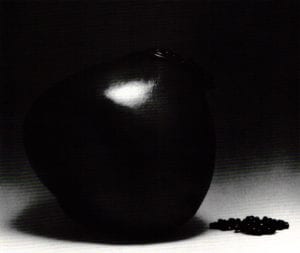 Susan Ewing’s holloware and sculptures were shown in a solo exhibit at Sandford Gallery, Clarion, PA from March 27 to April 20, 1988.