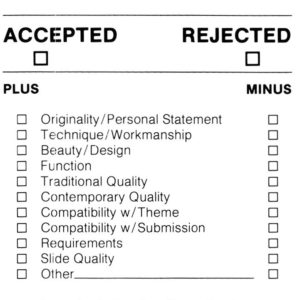 The cry of the rejected: “Why?” is the loudest single continuing lament heard after every juried show. Even when juror’s biases are known and catered to somewhat, the final selections are often a mystery, un clarified by juror’s statements in the catalog.

Why do they accept one entrant’s obviously derivative work while rejecting another’s that extends a basic concept of technique? Are jurors rewarding simplicity this month or did they just get tired and sloppy at the end of a grueling day?

The dilemmas posed by juried exhibitions have been debated periodically from every parochial viewpoint; esthetics, technique, functional/decorative, regional/national scope, display constraints, juror ease and comfort, etc. In spite of the most conscientious efforts by show organizers to be informative and fair to all, there is still serious dissatisfaction after almost every show.

Consider the alternatives, however—the Open and the Invitational—they have their own limitations. Anyone who has worked an “open” can attest to the surplus of embarrassing entries and their subsequent problem, how to display and/or hide them. An invitational, prejudged by artist selection, assures the viewing public a glimpse of the best work of the already-arrive, or does it? Once chosen, the invitee is free to submit whatever he/she pleases—sometimes a surprise. (Were you really inspired by the “International Jewelry Exhibit” at the American Craft Museum, which accompanied the 1984 New York Society of North American Goldsmiths’ conference, or did you get the feeling some of it was a put-down?)

There needs to be a compromise where in the “established” are encouraged to compete again, to expand and change, while providing a forum for aspiring hopefuls to measure their efforts against recognized standards. So, we are back to the juried show.

What then is wrong? Why the vague apprehension among artists and jurors, too? It is a lack of response, useful response, a cumulative sense of working in a vacuum from show to show. The selection process seems bafflingly arbitrary, even though show organizing committees often spend endless hours determining the theme or intent of the show, criteria for inclusion and the charge to the jurors, as well as composing a comprehensive entry form.

Entrants have presumably put their best efforts into the submitted work, spent a small fortune on slides, a modest amount on entry fees and postage, several hours complying with requirements, packing (if juried by the piece) and standing in line at the post office—no small expenditure of time. They deserve better than a check mark or X in return.

Jurors have a responsibility to educate—not only the viewers and collectors who attend the resulting exhibit but also the artist-entrants. If they are willing to set themselves up as arbiters of current good taste, they show be willing to justify their decisions in writing. A one-paragraph “Juror’s Statement” in the catalog is not sufficient.

Frequent jurors say, “Impossible,” “Too time consuming,” “No one would agree to judge, if they thought their comments or lack thereof were to be recorded for general knowledge. Perhaps jurors have become spoiled, knowing they can dismiss whole blocks of entries without reason, “Out!”, with little or no backlash because the privy-few overseers have been sworn to secrecy. Of course, most jurors are conscientious and careful, but they too might welcome more definitive direction. A shift in attitude from critical/judgmental to critical/informative would help to alleviate animosity and eventually improve the quality of work submitted both locally and nationally.

Certainly we are all accustomed to being evaluated and rewarded—or not—all our lives from pre-school application to retirement condo-purchase. We may not like the decisions, but at least those committees are expected to explain their positions. The determined persevere, sometimes starting competing programs (salons des réfués) superior to the originals. Whether fueled by outrage or despair, successful alternatives compel change in the status quo.

Agreed: High-quality exhibits are composed of high-quality entries selected by knowledgeable jurors with a clear understanding of the show’s intent. Surely metalsmiths can articulate acceptable standards for both potential exhibitor and judges and insist that they comply. Although applicants are used to being ignominiously eliminated, has any organization had the nerve to dismiss a juror for ignoring his/her responsibilities?

The jury, whether composed of generalists or specialists, professional artists, teachers or curators must adhere to the guidelines set forth by show organizers. Strong personal bias can be a factor only if that is understood as part of the “charge.” “A good judge should be able to recognize excellence in any medium regardless of personal preference for a certain subject matter or style,” a quote from my mother, an award-winning and versatile painter for the past 65 years.

An educated detachment and a willingness to be held accountable are essential to an improved screening process.

To implement this we need an all-purpose evaluation/information system, as bias neutral as possible, which informs both the accepted and rejected of their strong and weak personalities. At the same time it should be reasonably quick and nonburdensome to show officials.

One possibility applicable to jurying either by slide or piece is to label the jurors A, B, C, number the entries and tape-record comments for subsequent transcription and mailing. This plan preserves anonymity while providing participants with an overview of each juror’s taste. Similarly, in an event juried by the piece, a transcriber could follow each juror, recording comments by number and handing entrants the information at pick-up.

Point systems might be useful; if you receive a 4½ on a scale of 10 you would know how you measured against that group. An interesting challenge for some ambitious organization would be to design a scoring system with weighted values assigned to the different criteria, as in diving.

Offered below is a sample form designed by a group of outsiders—businessmen—after witnessing the jurying process of a major craft show. The form is meant to contain the absolute minimum information necessary to evaluate and inform. Its use presupposes a beautifully designed entry form outlining the show’s purpose, criteria, size and space limitations. The items apply to both rejection and acceptance. If “Rejected,” “Beauty” and “Function” are checked, one can assume that the bracelet, while lovely, didn’t seem to fit a normal wrist. Positive marks under “Technique” and “Traditional” would let the entrant know what aspects of the work impressed at least one judge. I think people would be willing to pay a dollar or two more in entry fees for access to this type of information. 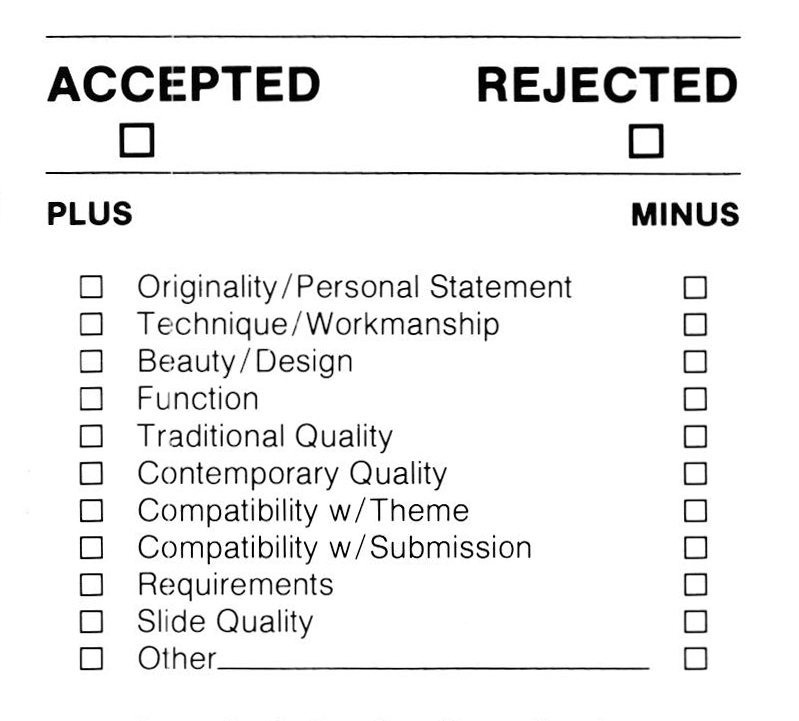 If you think that this discussion is superfluous, that your group has solved these problems and is consistently producing perfect shows, please share your secrets with the rest of us. I recently joined a group whose sole purpose for 34 years has been to produce a biennial regional comprehensive crafts show; they are still debating basic issues as if for the first time.

Yvonne Arritt is a fashion jewelry designer in McLean, VA, whose work is exhibited nationally.

All articles by this author
Previous Metalwork in Japan
Next Art and Technics: Finishing
Social media