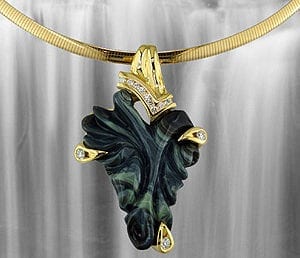 When Larry Bruno built his new store across from picturesque Springfield Falls in western Pennsylvania, he knew he had lucked out. His store would become a destination for romantic couples seeking diamonds and a chance for a photo next to the falls. What he didn’t bargain for, but has since come to love, is the 19th century iron furnace ruin that’s sited next to the falls and just under the cliff on which his store sits.

Bruno spent three years helping an archeological team unearth the nearly buried furnace, and he’s restoring it and the ironmaster’s house that’s also on his property. Along with introducing visitors to early American iron furnaces, which once dotted this stretch of western Pennsylvania about an hour north of Pittsburgh, Bruno will share his discovery of the hidden beauty in slag. The byproduct of iron furnace smelting, slag lies all over his property, and Bruno found many gorgeous specimens while helping to dig out the furnace. The jeweler recognized from the start that he had an opportunity to create polished stones from the glassy substance.

For those unfamiliar with the rudimentary process by which early iron was separated from its ore, producing slag as a byproduct, here’s a brief primer. After building a cylindrical stone furnace with an opening at the top, the ironmaster paid workers to dump ore, limestone (the agent that acted to separate iron from rock), and charcoal into the furnace’s roaring fire. When the mixture flowed to the bottom, iron poured out, and the slag residue — literally everything in the ore that wasn’t iron — was drawn off to cool and harden. Though a lot of slag just looks like rocks, the best pieces contain minerals that were embedded in the ore, which shimmer in different colors — not unlike a gemstone.

After Bruno saw the potential in his plentiful slag, he called master gem carver Glenn Lehrer of Lehrer Designs, Larkspur, CA, and asked if he’d try carving some of the prettiest stones. Lehrer, who has now carved the material, says the slag reminded him of agate because it contains similar banding. “It’s also somewhat like opal, but more brittle, and it features fracturing throughout, probably due to the stress cooling the slag underwent after melting in the furnace,” says Lehrer. “The pieces I’ve worked on have featured wonderful chocolate brown, mossy bluish-green teal colors. The banding is random and in various swirls, and it has worked well to carve them using my dancing angel carving style.”

Iron furnace slag contains alumina, silica and lime, among other substances, according to an academic paper, “Historic Blast Furnace Slags,” which appeared in the Journal of the Historical Metallurgy Society. It was written by the late John R. White, a retired Youngstown State University professor who led the archeological dig at Bruno’s iron furnace until his death in August. Such slag ranges in color from a milky gray to deep black and includes different tones of green, blue, and turquoise. The color is due to a combination of factors, including slag’s chemical constituents, the temperature at its formation, and the rate at which it cooled, according to Dr. White. Slags that are high in earthy bases, especially lime and periclase, tend to be light gray to blue, while high silica slags are generally darker in color.

Iron furnace slag can range from glassy to dull and stony in appearance and, when scratched, can range from hard to chalky. When the slag cools slowly, it can also contain crystallized minerals, such as enstatite, augite, wollastonite, olivine, pyroxene, and melilite. Slag that has a low percentage of alumina to silica becomes glassier, and rapid cooling also makes it more vitreous. Slag’s hardness varies, with softer ones being higher in lime. But slag can also approach the hardness of quartz, wrote Dr. White, who said the average slag has a hardness of 5 or 6 on the Moh’s scale.

Along with Lehrer’s masterful carvings, Bruno fashions some of his slag into cabochons, which he then sets into reasonably priced jewelry. Because the area draws tourists to visit the waterfall, go to great local restaurants and shop at a nearby outlet mall, Bruno figures that they’ll also now make a stop to see what early iron production was all about, and the slag jewelry will make an affordable souvenir. He has dubbed his slag, “The Ironmaster’s Gem” and he sells it with a tag explaining that the Springfield Furnace created the pieces, which he’s now recycled into something wonderful.

Reaching Back to the Bronze Age

Though Bruno is bringing a modern spin to the repurposing of slag, he is by no means the first to have done so. In the Mediterranean Bronze Age, which started about 5,000 years ago, metallurgical processes were producing colorful, glassy, vitreous material that was chipped away and melted down to make glassware and jewelry. Ancient glass beads, when analyzed, show a high percentage of slag byproduct, according to “The Chemical Composition of Glass in Ancient Egypt“.

Ganoksin is sponsored by
The Chemical Composition of Glass in Ancient Egypt“.

In the late 19th century, English glassmakers began creating an opaque pressed glass that was dubbed “slag glass” because the colors were achieved by adding iron smelting slag to the glassmaking ingredients, creating streaked, marbled or tortoiseshell effects. The glass was particularly prized in lampshades, where the soft glow highlighted the effects, according to Collectors Weekly. American glassmakers soon picked up the techniques and such glass is still prized and widely available at sites such as eBay.

Slag also has many commercial uses, and today is used in railroad tracks, as a road material, in seawalls, and in house foundations. Ground and granulated slag is also used in cement, high-performance concrete, and as a fertilizer.

For Larry Bruno, however, slag is now The Ironmaster’s Gem, and for his lucky customers, it’s a beautiful piece of jewelry.