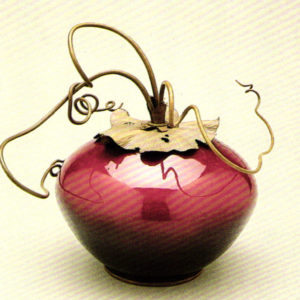 Strictly speaking, the metalworker’s contribution to the Japanese tea ceremony is confined primarily to the teakettle. This accoutrement traditionally has been overshadowed in the ceremony, as well as in the history of art, by the ceramic tea bowl, the emblem of tea for most Westerners. However, the essence of tea is Zen, which cannot be confined to a medium nor explained through esthetics. Zen is inextricable from the spirit of the object. This focus features Harlan Butt’s efforts to capture the inexpressible aspects of nature through a Japanese sensibility. 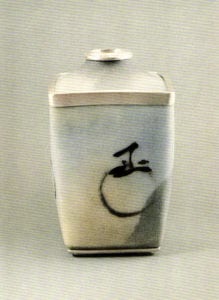 As one who often makes objects for the tea ceremony, Harlan Butt continues in his current work, which was the subject of a solo show at California College of Arts and Crafts, Downtown Oakland Gallery, last spring, with vessels and pictorial wall pieces. These extend his range of Orientally inspired work, searching for a quiet, Zenlike transcendence in the spirit of contemporary metalsmithing.

The artist fielding questions after o lecture, the questions slowly dropping toward the lowest common denominator. And now a student had to ask that most dreaded query, “Where do you get the ideas for your work?” 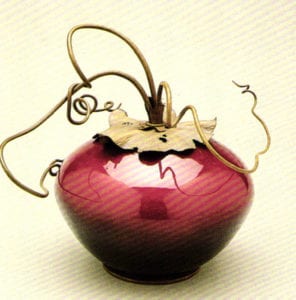 “Well,” Harlan Butt said, with one hand rubbing his forehead, “For example, I was walking in the woods in New England, in the spring. I went along a streambed where the skunk cabbage was just about to open up, and there, in the mud, I saw a possum footprint. The print was so fresh, it seemed as if the possum was still there — as if I’d entered a different moment just by seeing it. And the possum and I were both inhabiting that time, when the possum stood there with the mud oozing through its toes. It was a connection between us. We were together in a primordial world, and there was no such thing as civilization, or modernity. Just then, of course, a jet flew overhead. I think that moment is where one of my pieces came from.”

Harlan Butt’s new series of vessels is called “Garden Anagogies,” defined by Webster as an “interpretation of a word, passage or text that finds, beyond the literal, allegorical and moral senses, a…spiritual or mystical sense.” As such, his quiet vessels and wall pieces are all small searches for the inexpressible in nature. And if the possum story sounds like a koan, it’s no wonder: there’s more than a little bit of Zen mysticism that Butt brought bock from his last few years in Japan. 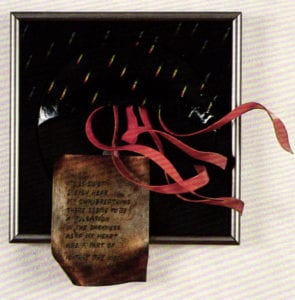 His Mu Chi’s Koan refers to o specific work of Asian art: a Chinese brush pointing of six persimmons by Mu Chi (Southern Sung period). The reference is quite literal: the pointing is faithfully reproduced around the sides of a small vase. But there’s a second Asian influence at work here — the Japanese tea ceremony. Harlan Butt often makes pieces for use in the tea ceremony, and Mu Chi’s Koon, with its unassertive, respectful approach, its muted, semitransparent colors and its poetic understatement, shores the sensibilities of tea.

In Harlan Butt’s work, as in Japan, high art is lavished on and found in small things. Japanese culture has always been willing to look for the inexpressible in the details, the ordinary moments of life. Tea, of course, is one example; Ikebana (flower arrangement) is another. Senei Ikenobo, a master, put it this way: “[Ikebana] does not aim at prettiness of flower, but, of the vitality and the movement of mind resonant with life.” Both Butt’s Wisteria Series and his Garden Anagoge series use Ikebana as a starting point: they’re flower arrangements without the flowers. Both series are vessels growing their own gardens. In Ikebana, a central element is the transient nature of the flower: it’s art of a guaranteed short duration, art that locates itself in the moment. 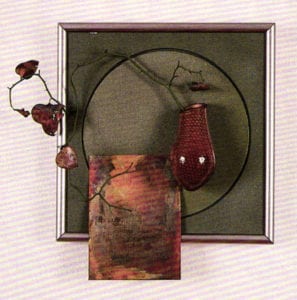 Bull’s Wisteria Series uses that fleeting quality in a paradoxical fashion — he portrays vines frozen in the midst of search, grabbing at space, just as people (including the artist) twist and turn and grab at ideas to explain the world to themselves. The Wisteria Series seems to say: this is what a single moment is like; this is how it will always be.

Where each piece in the Wisteria Series slowly grows more spatially complex, as if the vines are steadily growing, entwining both onlooker and artist, the Garden Anagogy series is about a different kind of growth: inward. All the pieces are elegant, but the later ones become increasingly simple, serene. The last Garden Anagogy is both an end and a beginning, as out of a vessel of immaculate roundness, a single furled leaf slowly prods its way upward. 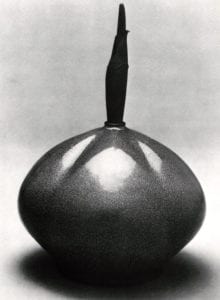 A series of wall pieces Ten Bulls in a Quantum Field is Harlan Butt’s homage to the Ten Oxherding Pictures — a traditional series, pointed by many artists, which depicts the 10 stages of enlightenment in Zen Buddhism. Ten Bulls in a Quantum Field, like much Zen art, incorporates the natural world — wind and weather, moon and mountain — as partner and pendant to the artist’s mental and spiritual life. The series borrows from Chinese landscape pointing the habit of doubling its art by incorporating the written word; in this case, each piece has a resident poem. The Oxherding series begins with “seeking the Ox,” which is sometimes called “Undiscipline”; it’s about the common agitation of life trapped in the ego. In Ten Bulls in a Quantum Field, Harlan Butt’s poem in the first piece begins, “Damn it, there’s no reason for this.” Slowly, the natural world begins to filter into the perceptions of the artist/narrator. The third picture in the Japanese series is called “First Glimpse of the Ox,” and Harlan Butt’s work reads:

There seems to be
A pulsation
In the darkness
As if my heart
Was a part of…
Is that the moon?

In the Oxherding series, stage #8 is called “Both Ox and Self Forgotten”; Ten Bulls #8 is a smooth round all-absorbed copper half-sphere in bas-relief and its copper “scroll” is completely blank, poemless. But emptiness in Buddhism is affirmation. “Sunyata is formless,” wrote D.T. Suzuki, “but it is the fountainhead of all possibilities.” Nothing, in short, is a place where something can happen. And the final piece in the series, corresponding to the final stage of enlightenment, has a simple metal coffee mug hanging on a nail, beside a scrawled note that reads, “If you need me, I’m in the studio.”

Ken Chowder is a writer living in San Francisco.

All articles by this author
Previous Harold Hasselschwert: Materialization of the Exotic
Next Hermann Jünger: German Goldsmith
Social media