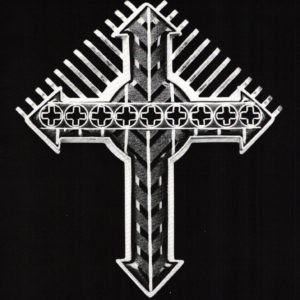 This article is one of a series of articles from Metalsmith Magazine “Fads and Fallacies”.  For this 1987 Fall, A. Stiletto talks melancholic designs.

In a recent interview, reported in The New York Times, the usually diffident Geoffrey Beene gently criticized “designers who create brightly colored, happily sexy clothes when so many people are dying of AIDS. That,” he said “is why his fall collection was full of dark clothes and religious music.”

His comments came during a week of memorials at the Fashion Institute of Technology and Parsons School of Design for Antonio Lopez, the illustrator, and Willi Smith, the designer, both victims of the disease. When so many designers have been affected by physically, emotionally and psychologically by this epidemic, it is regrettable that they have not shown a corresponding pathos in their work. Although notable like Calvin Klein have actively supported AIDS awareness. Geoffrey Beene’s fall fashions are further poignant reminder that a designer’s work is accountable to the full range of current emotions held by wearer and maker alike. 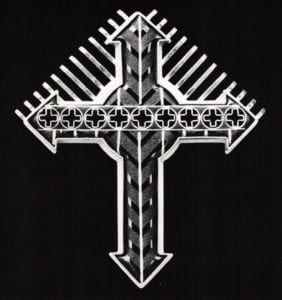 Another example of the “solemn beauty” that Beene now finds appropriate appears in the complementary work of Arthur Koby, who makes jewelry for Beene’s fashion collections As The Times reported: “For all, Mr. Koby created jewelry that seems to have sprung from medieval times. Many of the oversize pieces have been blackened with either ancient patination techniques or the modern processes used to oxidize automobile hubcaps. Mr. Koby also creates jewelry from such unexpected materials as drawer hinges, Victorian shoe buckles, diamond-faceted stones made from melted down beer bottles, handcarved water buffalo horn and shredded or solidified balloons.”

Arthur Koby’s use of “blackened” patina, unusual materials, medieval and Victorian images has origins in “mourning” jewelry. Such jewelry, worn in memory of a deceased person during periods of mourning, underwent stylistic changes from the impersonalized memento mori (literally, remember you must die) jewelry of the Middle Ages to the specifically commemorative pieces of the late 17th century onwards. Although brooches and pendants were worn in this manner, the most common form was the ring. Originally, in the Middle Ages, rings of the deceased were given to and worn by relatives and friends, but when these proved insufficient in number, the custom developed from the 15th century to the 17th of providing in a will that a number of identical and relatively inexpensive rings be made and given to mourners.

During the Victorian era, after the death of Prince Albert, the commemorative ring made its appearance, made generally of jet (dense black coal) in somber styles. Although the most of the known examples are in memento mori style, after 1770 a lock of hair, a portrait or an enameled mourning motif was set under a crystal in the bezel. Such rings were made in marquise shape and decorated with seed pearls, amethysts, diamonds or paste. In the early 19th century such rings were set with small gemstones, or black or violet enameling was added to a gem-set ring owned by the deceased.

Ganoksin is sponsored by
th century such rings were set with small gemstones, or black or violet enameling was added to a gem-set ring owned by the deceased.

Although the sentiment appears similar the intention seems to differ between the custom of mourning jewelry, which I feel is more aptly categorized as a commemorative, and the current action of Geoffrey Beene, which is expressive. Simply stated, when personal in nature, mourning jewelry is worn to keep alive, for a limited time, the memory of a loved one; when public in nature, as in the case of Prince Albert rings, it is worn to preserve the memory of a figure whose image has social, cultural, or political significance. In both cases, the deceased is commemorated.

Beene’s somber mood, on the other hand, is not specific to the death of Willi Smith nor any other victims of AIDS, but rather acknowledges the undeniable effects that the spectre of AIDS has on his process of creation. Moreover, he is asking his audience whether they have the same sympathetic feelings when they dress. Can they deny that a specific mood or emotion takes over when they go out in public wearing their psychological profile on their sleeves? We accept the premise that we must have appropriate outfits for different social occasions yet dismiss psychological adornments that reflect our different states of mind. Fashion vacillates from season to season in response to the property of social mores, but doesn’t the change in the emotional fabric of society affect these properties as well? We wear black in deference to the deceased or hang portraits of JFK or Martin Luther King to secure their memory, but we suppress the wearing of personal sentiment that is ultimately more appropriate to our psychological well being.

It is not the intention here to dwell on the macabre or advocate neo-memento mori but rather to encourage a liberation of jewelry and fashion in the expression of the full range of emotions by both wearer and maker. Although public sentiment towards AIDS most often surfaces during the mourning of its victims, we all share a sense of melancholy over this social condition.

Before the 17th century, it was believed that melancholy was a disease caused by the excess of black bile in the body, characterized by hysteria, distemper and paralysis. Thomas Aquinas pronounced it a sin because it interfered with human reason, and Dante reserved a place for the sad in hell alongside the angry. No wonder we are so timid, unwilling to explore this emotion, eventually cloaking it with euphemisms like depression, ennui, angst, neurosis and alienation. But those who acknowledge their melancholy share a bond—a consuming interest in their own emotions.

For me, it is not only remedial but ultimately expressive to meditate on human frailties, on life’s complexity, absurdity, brevity. At times this emotional absorption leaves the melancholic ill-prepared to act. The lesson is that however unique we feel ourselves to be, few of us live as intensely as our emotions would require. Although an extreme case is to be avoided, a little melancholy goes a long way toward thinking intelligently about life; it insulates us from the cultural demagogy often associated with fashion. Maybe we don’t need a reinvestigation of mourning or commemorative jewelry, but a little melancholy could go a long way to liberating the private and emotional response in the wearing and making of jewelry.

By A. Stiletto
Metalsmith Magazine – 1987 Fall
In association with SNAG‘s

All articles by this author
Previous Fads and Fallacies: Fashion Fads
Next Art and Technics: Broaching Subjects
Social media