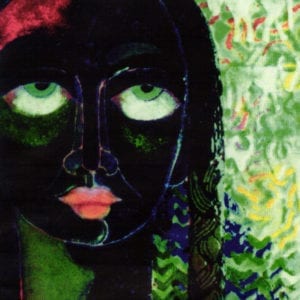 Since the inception of The Enamelist Society of India, in December 1999, we have been working towards the resurgence of enameling in India! About 50 workshops have been conducted, and there are over 70 members of the Society. So we were encouraged to take one more step forward – to organize the first juried exhibition of enameling on metal in India. As usual, the response was half-hearted: 64 entries from 18 artists. Despite the standard not being up to the mark, the Society decided to go ahead and create more awareness. The exhibition was inaugurated on the 4th of April, 2004, at Kamalnayan Bajaj Art Gallery, in Mumbai, India, by Sangeeta Jindal. She is a committed promoter of arts in this country. She owns and runs the premier art magazine in India, Art India. 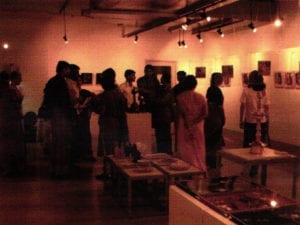 It was the first juried enamel exhibition of its kind in India where artists from different disciplines (e.g. painting, sculpture, metal, jewelry, etc.) shared a common platform and worked together for promoting the new medium in various fields. 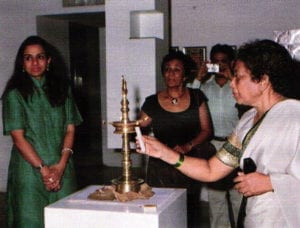 All pieces, except for one corner of jewelry, were wall hangings made on copper and steel. Artists like Nalini Bhagwat, Hema Rajeshirke, Sameer Pawaskar, and Susmita Banerjee used painter’s techniques. The results they achieved were rather good. Meghan Salgaonker experimented with various fluxes on cut shapes in copper. 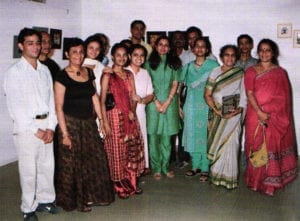 A group photo of all participating enamelers in the show.

I experimented with cloisonné on pre-coated steel and transfer on copper. It was very satisfying as I was successful in transferring my imagination on to steel and copper canvas. To crown it all, I even sold my first major piece! Six of my colleagues sold pieces. It was a very encouraging beginning.

During the exhibition, two workshops were organized to teach enameling to beginners. The ambience was perfect for the students to draw their inspiration from the hanging works. Also the visitors could watch the process of enameling. Simultaneously, a workshop was conducted to train three young enamelers to become instructors for basic course in enameling. 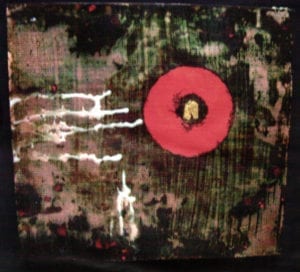 Ms. Sangita Jindal was very receptive. With our persistence and her encouragement and patronage, enamel should and will get the recognition in India it now deserves!!!! 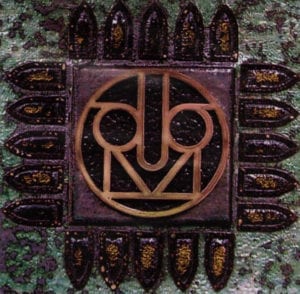 In order to take full mileage from the efforts, the two senior artists and teachers, Veenu Shah and Vivek Das, exhibited their new works for a week from 11th to 17th April 2004 in the same gallery. They have also experimented with new techniques and ideas. Veenu introduced some new concepts. She enameled copper foil on both sides and framed then pressed between plexiglass. They become great dividers. Some architects found them fascinating! 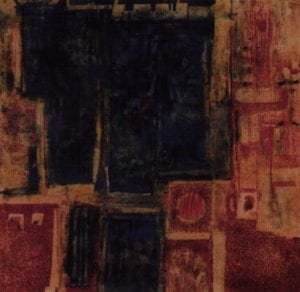 Vivek’s sculptural bust was a great hit. He had combined repoussed copper, lead and enamel. It was very cleverly done and opens huge possibilities for enameling. Vivek Das has been a professor of metal department at the Sir J. J. School of Art since the late seventies. 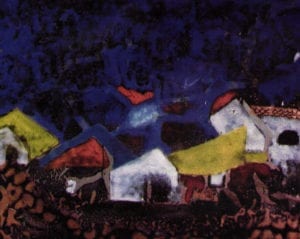 The exhibitions were successful. The medium of enameling did receive a new recognition and the limitless possibilities were taken into consideration. It was yet another step forward in the progress of popularizing enamel as a new medium to be taken notice of. 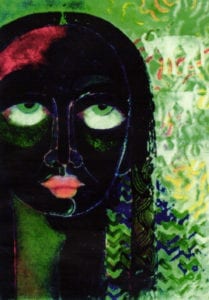 We will continue to work for the recognition of the fraternity of enamellers.

Let us all unite, put all our energies in to a common resource bag, and become a giant in not too far a future!

All articles by this author
Previous Alana Clearlake: Limitless Possibilities
Next Stell and Shevis
Social media