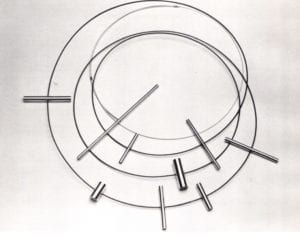 First impressions being what they are, sometimes on target, and at other times missing the bull’s eye by a wide margin, I couldn’t overcome for some time my initial reaction to the “Jewelry USA” and “Jewelry International” exhibitions shown at the American Craft Museum in New York this past summer: the feeling of walking into a labyrinth of artifacts and geographical classifications structured along the lines of the “Library of Babel.”

Objects like language, or to be more precise, the jewelry in this case (and in the cases) was fractured into a multitude of different mute dialects and then reconstituted into some grand curatorial schema: USA here and International there. 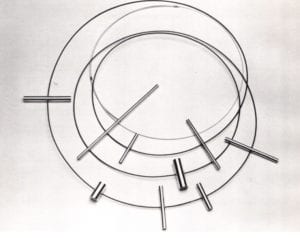 As my disorientation and inertia subsided, I pulled out my mental Baedecker. Recognizable stylistic contours, landmarks and other cardinal points of the mainstream compass materialized and guided me through the varied peaks and valleys of a Whitmanesque landscape of objects in the American section resonating with diversity: stylistic hybrids and appropriations, Modernist and Post-Modernist echoes, techno-romantic probes, but most of all:

I celebrate myself, and sing myself (l am large, I contain multitudes.) I give the sign of democracy Turbulent, fleshy, sensual, eating, drinking and breeding

Filtering out the florid rhetoric of banner waving and hyperbole, the poetic centrifuge came to a halt—breeding, yes, breeding is the crucial word in describing the American jewelry character.

Approaching the border, the swells of expression seemed to quiet. A kind of silence pervaded the international section. There seemed to be a kind of coherency (possibly due to the fewer pieces selected for this phase of the exhibition). Shadow games with purist and nonobjective geometric configurations were in abundance. An older model, Modernism, was still holding sway. What about the celebrated cause Post Modernism? Had Post-Modernist concerns escaped the European and Japanese jewelers?

One thing is for certain, a major difference exists between the International and American jewelers in terms of the assimilation of Pop attitudes. The work of a great many of the American jewelers thrives upon mass media, advertising and consumer fetishism. If there is any sign of Pop attitudes in the international section it is so oblique as to be inconsequential. Of course, it doesn’t matter if anyone values Pop beliefs any more than some other stylistic or cultural preference. But it does point to the revolutionary value of Pop art for Americans, and to a certain extent, some British and German jewelers in how it met people’s needs without preaching about what art should be. So, in effect, Pop art tended to be experimental and humanistically oriented and capable of increasing one’s options in terms of taste.

I guess I fell prey to my own biases and fatigue in looking for ruptures, dislocations, anything that might veer from the norm. But can one look for innovations in the crafts? I think so, but it is of a very different order in terms of how ideas and processes are assimilated. I am firmly convinced that there is the possibility to free the intellect in our century from traditional formats. This would lead to the eventual recognition that our cultural sign systems are the product of human whim. In this light, I feel it is important to understand that most change can occur when people play with new signs or critique culture with a serious brand of humor.

A checklist of other jewelers (see visuals accompanying this essay). An admonition: this phase of the essay is not meant to be definitive, but as Roland Barthes would hope for: An exploration into the plurality of texts. The reader should create his/her own text, even criticism. The first step is to realize what Mallarmé pointed out at the end of the last century: All methodology is a fiction. 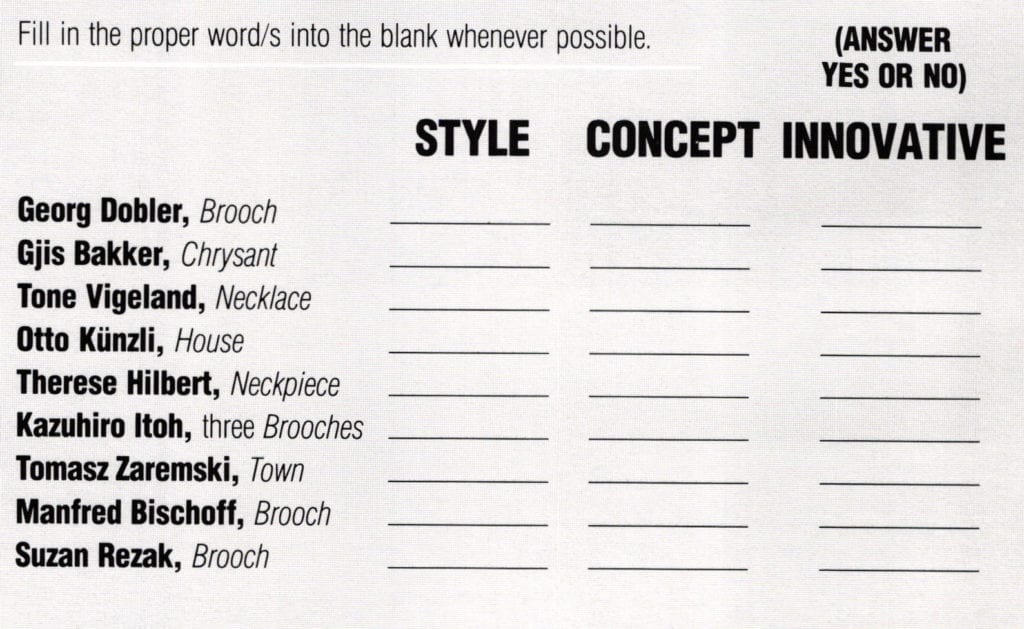 OBSERVATION 1
Not simplicity but more complexity. Expose the layers of relationships. A unified text or essay to let the spectator in on the hermetics of the jewelry world. Score one, at least, for Helen Drutt and the “Jewelry International” catalog.

OBSERVATION 2
When dichotomies occur, a dialectic is or might be in order. The need for a more dynamic and interactive comparison of pan-European and Japanese styles and concepts to American jewelry developments.

OBSERVATION 3
An International Style in jewelry—linear, geometric, puristic, Is there an underlying collective attitude that makes it differ from the concerns of the American jeweler? With the given examples in the international section, one would have to argue that a Modernist paradigm was still in operation. It’s as if one walked into a geometric and ideal world of Platonic solids. But hasn’t the modernist model run its course? Post-Modernist critics argue that it has. Or is Modernism simply one more ideological stylistic strain that has lost its subversive value? Probably all of the above and a lot more. But one thing seems apparent—Post-Modernist attitudes have for the most part been negligible in the case of European and Japanese jewelers.

OBSERVATION 4
Do Künzli Bischoff critique cultural values? Are they playing with cultural values? Are they playing with cultural signs? Monopoly house epaulets, pass go, collect $200. Are these anti-elitist overtures? The concepts, I’m afraid, have transcended their traditional role in jewelry, especially a Künzli’s jewelry. It, at least, is exploratory and questioning jewelry’s role in a European setting. I think Bakker did the same thing with his rubberband jewelry (invisible ornamentation).

Credit for the structural organization and act of appropriation on my part is due to a marvelous book written by Ihab Hassan: Paracriticisms Seven Speculations of the Times. (Urbana, Illinois: University of Illinois Press), 1975. A color catalog of “Jewelry International” with introduction by Helen Drutt is available from: American Craft Council, Publication Sales, 401 Park Avenue South, New York. NY 10016 for $7.50, $6.00 to ACC members; NY State residents add appropriate tax.