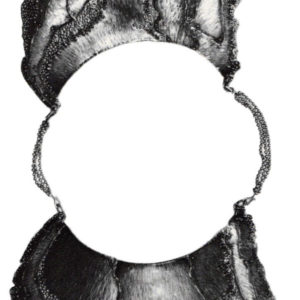 Carrie Adell is perhaps best known for her jewelry which transforms common, familiar, organic and geometric objects and forms into interesting and wearable jewelry. Her work ranges from simple to flamboyant, classic to outrageous. This exhibition departed from the established mode and dealt with her attempt to make a stronger, more personal statement in just six pieces. The title was well chose, for it described the exhibit on several levels: the artist’s creative act and the underlying theme of nature’s energy. The interpretations were generally romantic and painterly compared to the graphic presentations of past work.

Initially the pieces struck me as a return to the 60s and the organic cast forms so popular then. However, the scale, technical skill and intellectual involvement took this work out of that era. Of the six pieces in this small show, four were jewelry, one an object/container and one a piece of sculpture. The sculpture, entitled Carried Around, was an orphan; it did not seem to relate to the other pieces in content or technique, other than being a “personal statement.” If sculpture is part of Adell’s new direction, I wish there had been more to see.

A neckpiece Around the Bay and the object Another Box of Rain were technically well executed and invocative of the natural forces of rain and landscape, but suffered from the use of a commercial chain that was too familiar and too obvious in addition to being out-of-scale. A Rocky Place, another neckpiece evidenced considerable skill in the integration of Biwa pearls into the dense, forged silver formation. It was an elegant interplay of color, form and surface. This piece, interesting in itself and a beautiful, strong adornment, is perhaps so strong that the focus would be on the piece rather than enhancing the wearer. The possessor certainly would not shrink from being the center of attention.

Sun Dagger, A Solar Marker, was a powerful neckpiece with imagery based on archeological finds. The execution was more direct, almost primitive in reaction to the symbolism. Again, however, the imagery was so strong that it was difficult to accept as a piece of jewelry to be worn.

The final piece Solar Wind, was a body piece that consisted of two units that could be worn in front and back connected over the shoulder by a series of chains, or detached and each unit worn separately. Again, the selection of the chain was not as subtle as it might have been. In this case, however, it is a minor criticism since this was a truly elegant piece. The forms, surfaces and color created a most sophisticated statement of spirit and joy and would enhance the body.

This show was a very courageous undertaking for the artist, to pour all of her creative energy and time into a few pieces of such power that would precipitate such strong viewer response.

All articles by this author
Previous Christine Clark and Dennis Leudeman Exhibition
Next Janice Kluge: Metalwork and Sculpture
Social media