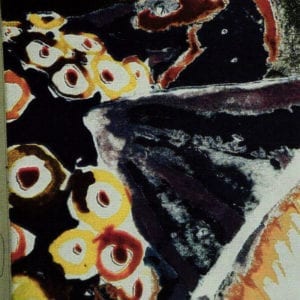 It is not very common to see buildings covered by huge murals made with enamel. There are some examples of these architectural panels around the world, many of them still existing. One of the biggest murals ever made with enamel opened to the public on March 31, 2003. It covers one of the walls of the new Discovery Communications Building, located on Colesville Avenue, downtown Silver Springs, half a mile from Washington D.C. This building is the new home for the cable channels Discovery Channel, Discovery Health, and Digital Networks.

The project was the result of an open contest for artists to propose a durable, attractive and decorative covering for the main façade. It had to be weather resistant and long lasting, because it had to be installed on the outside façade, on the street level facing the main avenue. Of the two finalists, one proposed the use of terrazzo and the winning project presented by Mr. Narcissus Quagliatta using enameled panels. 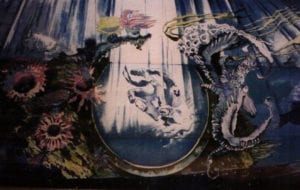 The mural for the Discovery Communications’ new building in Washington D.C. was completely manufactured in Mexico City, at the Alfher’s production facilities. 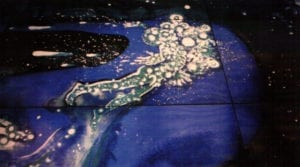 Mr. Narcissus Quagliatta was born in Rome in 1942, studied with the famous surrealist painter Giorgio De Chirico. He moved to the United States in 1962 and received his Masters in Art from the San Francisco Institute of Art, graduating as a painter in 1968. He settled in this area and started to work trying “to capture the light into his paintings”. This led him to work with glass in the early 70’s, beginning his self-taught education working with stained glass. Thanks to a grant from the Bullseye Glass Co., where he did months of research, he explored new techniques on fused glass, developing since then many ways of “working with light”. He first came to Mexico in 1986 as a guest speaker on his artistic experience at the Polyforum Cultural Siqueiros (a cultural center in Mexico City). He returned in 1992 at the invitation of the International Congress of the Glass Art Society, together with the exhibition “Transparencies: Sacred Art in Glass” at the Franz Mayer Museum, in which he was one of the exhibiting artists. After that, he was invited to have a solo exhibition in 1995 at this same Museum in Mexico City, showing some of his watercolor paintings and many glass works executed in several techniques, some of them from his own inventive “painting with light”. For this exhibition, he created the very important piece “La Puerta de la Noche”, a big fused glass mural measuring 4 by 10 meters (12 by 30 feet), now in the Santuario Hotel and Spa Complex, in Valle de Bravo, Estado de Mexico, Mexico. He moved permanently to Mexico in 1995, where he has been teaching, working and always experimenting with new glass techniques. In recent works he has been working with fused glass. For Mr. Quagliatta, the mural project for the new Discovery Communications Building was the first time he worked with enamels. 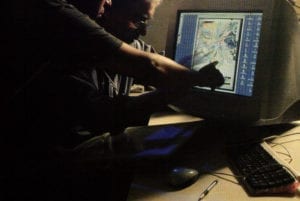 His “paintings” in stained and fused glass are now part of the permanent collections of the Metropolitan Museum and the Corning Museum of Glass in New York; the Renwick Gallery at the Smithsonian Institute in Washington, D.C.; the Modern Art Museum in Yokohama and the Glasmalerei Izukogen Museum in Shizuoka-Ken, in Japan; the Oakland Museum and the De Young Museum in San Francisco, both in California, USA. 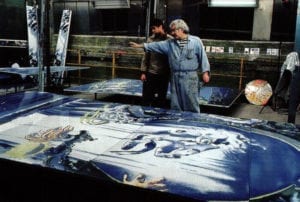 He has been commissioned to create glass pieces for many private buildings and residences all over the world. Between 1995 and 1999, he designed and manufactured a stained glass dome that was installed in the Basilica de Santa Maria degli Angeli in Rome, Italy. This church was the last architectural work designed by Michelangelo during the Renaissance. (The dome, measuring 3.5 meters diameter – 10.5 feet – was curved in the kiln, formed, acid etched and painted, and contains scientific instrumentation which projects the sun on the floor of the Church, working as a sun clock; the technical instrumentation was designed and manufactured at the Astronomical Institute from the UNAM, Universidad Nacional Autónoma de Mexico, in Mexico City). All the glass sections for this dome were fabricated in Mexico, with the exception of the center sphere that were blown by William Morris, in Seattle, Washington, USA. The dome was inaugurated by Cardinal William H. Keeler, Archbishop of Baltimore, USA, to celebrate the Jubilee 2000. 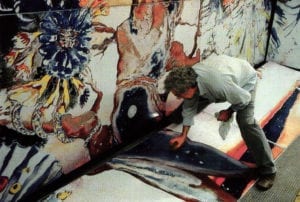 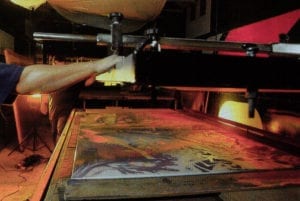 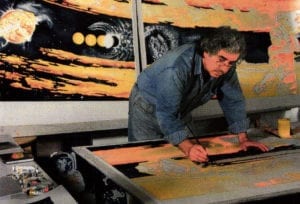 To manufacture the mural from the approved project, a watercolor painting was done, scale 1:3 (measuring 60 feet long). From this, slides 4″ by 5″ were taken and these were scanned into a digital file. Mr. Pablo Torrealba, the silkscreen Master from Alfher’s Enameling Co. interpreted the watercolors and broke them down into the color screens. Then, the decision of colors was made; some of the pieces have up to 16 colors. A ‘positive’ silkscreen was designed for each color for each enameled piece (some of the screens were washed after and reused for a different panel). 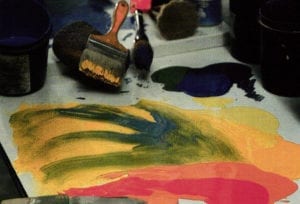 The mural has 92 steel panels, from which 72 are of a standard size 1.22 x 2.44 meters (4 x 8 feet), and the remaining 20 have different sizes because they were either special forms following the sloping sidewalk, or the end pieces needed to fit at both ends. The panels were cut from 16 gauge steel sheet, folded at the edges and with holes drilled on these folds in preparation for mounting. In some of the special pieces, ‘wing” supports for mounting had to be welded. These panels were cleaned in an immersion process with huge tubs (each one holds 12,000 liters, equivalent to 3200 gallons); two filled with hot water (the first one at boiling temperature and industrial soap), two with hot water to rinse, the next one with hot water and a neutralizer and another one to let them drip (like an enormous colander); then immediately dried with hot air to avoid oxidation. The panels were moved by a traveling hoist among the six different tubs. 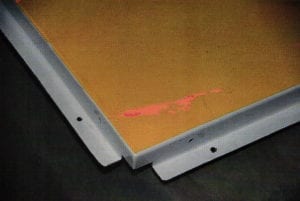 Closeup of the corner of one of the rectangular panels, showing flanges where panels are attached.

The clean panels were then hung and hand sprayed with a ground (enamel in a water base) on the front and back, and dried in a drying tunnel between 200 and 250 °C (390 and 480°F). Then, a white coat of enamel (also with a water base) was sprayed and fired hanging at 835°C (1535°F). When a red or purple was required as a base coat, they fired the ground first and then the color in a second firing. After that, the color enamels were applied with a screen process. They used 1400 ‘positive’ screens for the project.

All the colors for the enamels were prepared at Alfher, the Mexican company where the panels were made, using frits and pigments. The required consistency for the screen process application was obtained by mixing the powder enamel with pine oil. 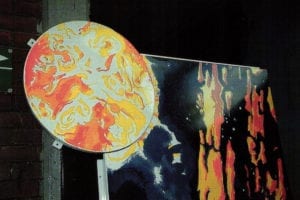 One of the special pieces with ‘welded wings’, shown attached to a rectangular panel.

The screen process was executed using between 90 and 110 mesh screens, fixed into an aluminum frame The squeegee was hand-operated. No more than two colors could be applied at one time unless the piece had a ‘small firing’ at 650°C (1200°F), in order to evaporate the oil and also not to damage the previous layers. When completely cold, the other colors could be applied with the same process. All the pieces were ‘traveling’ to be fired in a hanging position into a kiln measuring 9 meter long (27 feet), moving at a rate of 3 meters/minute, which means each firing was for three minutes, with temperatures between 780°C (1440°F) and 810°C (1500°F), depending on the colors. This kiln can hold pieces up to 5 meters long (15 feet) by 1.22 meters width (4 feet). It works with 8 gas tubes, 7″ diameter each, three on each side of the kiln and two on the base. 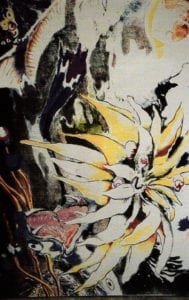 Before the last firing, the enamel was applied by Mr. Quagliatta using brushes and sponges to achieve the textures and details he wanted. Each panel had a total of 3 to 5 firings, depending on its particular requirements. 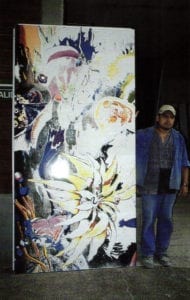 Each finished piece was checked for thickness, texture, shine, and adherence of the enamel.

After wrapping each piece in a special plastic vinyl and placed on wooden pallets, they were transported by trucks to Washington, D.C. 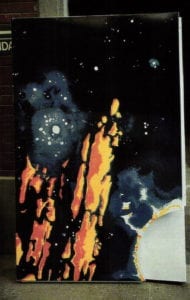 An aluminum structure was affixed to the building and the enameled panels attached to it, starting from the bottom (fixing the first row of panels on top of an ‘L’ shaped metallic support). Alignment pins were used to adjust the 92 enamels to their proper place. The joints were caulked with a weather-resistant Dow Corning sealant. The entire installation was done by Mexican workers between January and February 2003. 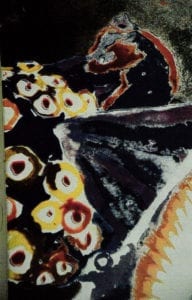 It took Narcissus Quagliatta one and a half years from the project design until it’s completion. 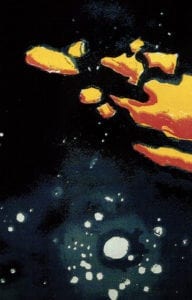 Alfher Enamels is a Mexican company that was founded 53 years ago by Mr. Alfonso Hernandez, as a ‘maquiladora’ for home appliances. Some years later, they started producing porcelain enamel writing boards and flipcharts, recognized products still specified by all major educational institutions in Mexico. Now, they produce 90% manufactured products of their own and. 10% as a ‘maquiladora’. 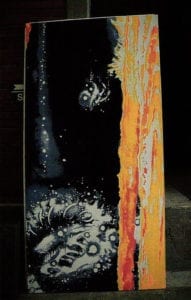 Nowadays, under the management of Alfonso Hernandez, Jr., a Ph.D. Mathematician, they have developed a huge line of products made with porcelain enamel on steel, like walls, roofing and façade systems; bathroom partitions, doors, column coverings, architectural products under the trade name Porcewol, as well as all kinds of advertising panels and signage. Their products are used throughout the world: Rome Airport, Italy (1996); subway stations in Mexico, D.F. (1994), Boston, USA (1996), in Madrid, Spain, Hong Kong, and Los Angeles, USA (1998); office and commercial building façades in Taipai, Taiwan (1996) and in Southampton, UK (1999); a shopping center/Mall in Hong Kong (1999); the Midtown Tunnel in Queens, New York (2000); and many examples in Mexican hospitals, parking, commercial and apartment buildings. Many artists have used the technology, machinery and enamels of Esmaltados Alfher to create beautiful enameled pieces, like this one in Washington, D.C.