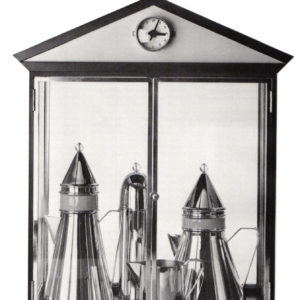 In the Fall of 1983, the Max Protetch Gallery in New York City presented a collection of tea and coffee sets, complete with sugar bowl, creamer and tray, produced by the Italian firm Alessi. The collection was the result of an experimental project based on an idea of Alessandro Mendini in which 11 internationally known contemporary architects were each commissioned to do the research and design for one set.

The results are both exciting and problematic. Some designs are very elegant and work well in every respect. Notable among these is the set of Spaniard Oscar Tusquets who combines silver with gold plating on the inside and inset glass lids and an ebony handle on the teapot. The tray echoes the graceful elegance of the rest of the set.

Perhaps the best thought-out design was produced by the Austrian Hans Hollein. His tray was in the form of the deck of an aircraft carrier. A square sectioned coffeepot was designed to nest with the sugar bowl that in plan was three quarters of a short cylinder. Both pieces fitted against the rim of the tray, as did the tall elegant creamer. A long, oval teapot had a bold sweep. All pieces handled easily, were well balanced and had heat-insulated handles. The tray was the only one in the 11 sets large enough to accommodate tea cups which indicated that some designers had simply not informed themselves adequately as to how a tea and coffee set is used: the worst omission was the absence of heat insulation on the handles and finials on the coffee- and teapots.

Alessandro Mendini’s design was among these. His set displayed tubelike pedestals that created a certain floating lightness. Finlike flags on the side of the coffee- and teapots seemed superfluous. On the sugar bowl where they could have acted as handles they were absent. It was almost impossible to pick up the hemispherical sugar bowl.

Paolo Portoghesi designed his set on a hexagonal plan made to nest on an elongated hexagonal tray. Three bands of black-and-white champlevé enamel were effective. The concept was generally well integrated but the nesting was so tight that the pieces, when handled, are bound to scratch each other badly. 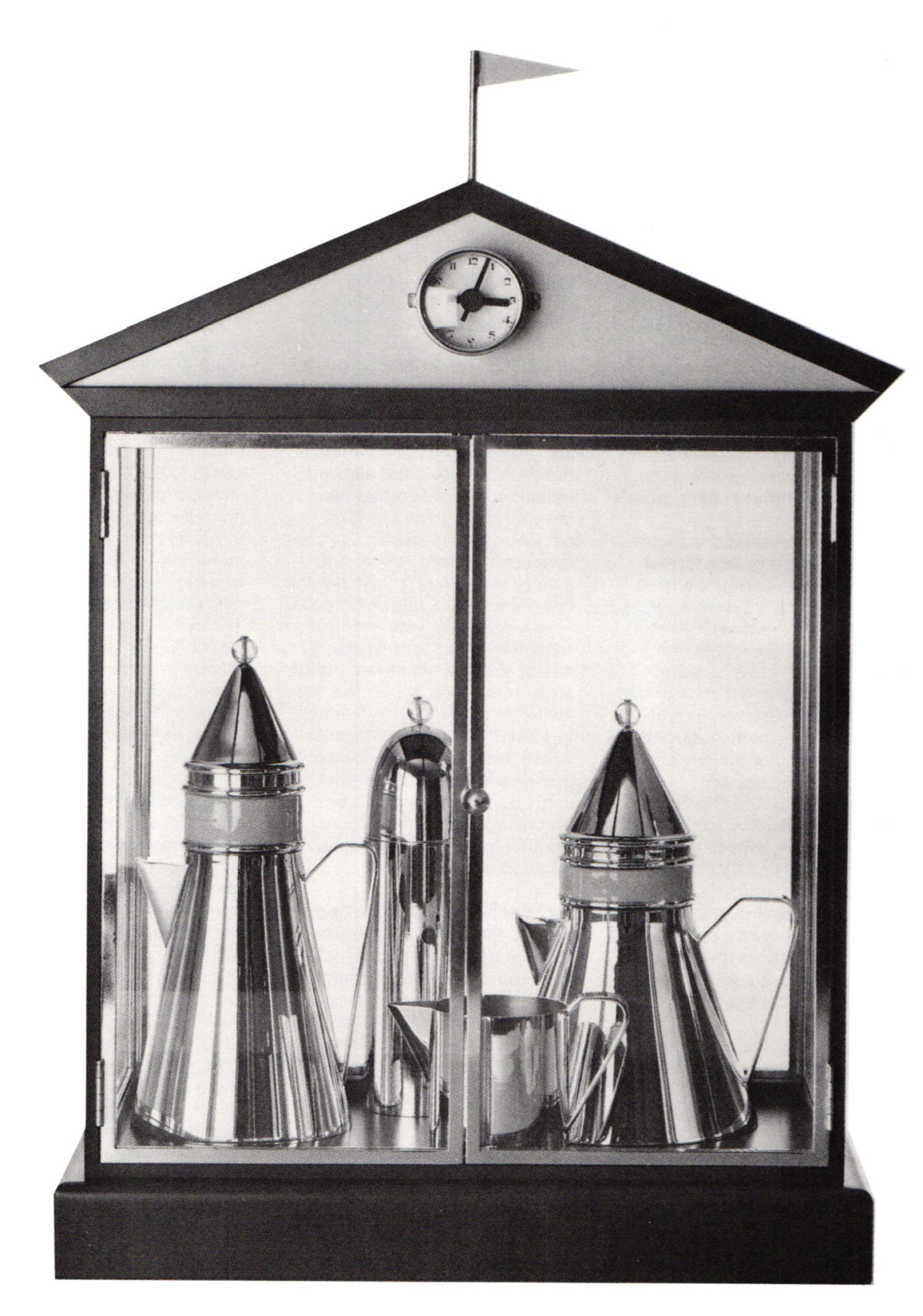 Aldo Rossi’s set does not work as a set. The coffee- and teapots are conical (with uninsulated silver handles), the creamer and sugar container are cylindrical, the latter so tall, and with an eliptical cover, that it will be difficult to get the sugar out with the very shallow spoon. What the set itself lacks in originality is made up by the storage unit which is a little house with glass sides and doors with a green patinaed roof sporting a weathervane and electric clock in the gable.

Stanley Tigerman’s set is perhaps the most whimsical. The silver handles and finials on the coffee- and teapots and creamer are in the form of braided human hair and the pouring lips are casts of human lips. The silver handles on the spherical sugar bowl have the shape of human ears and the handles on the tray are in the form of human hands. Except for these attachments the forms are dull and insensitive.

Michael Graves has produced the most eye-catching set of all. It is so massive that it reminded me of the blue monsters in the old Beatles movie “Yellow Submarine.” This may be due to the high, somewhat elephantine feet that each container displays, as well as several dozen bright blue, painted aluminum spheres and finials. The round glass tray with tubular silver rim has a certain airiness that contradicts the massiveness of the set.

Charles Jencks’s set looks like a fine architectural specimen. The columnar pieces don’t work as coffeepots, teapots or sugar containers. In terms of a tea and coffee set they are a bad joke. It’s too bad that such excel lent craftsmanship was wasted on such a useless design.

Richard Meier’s set, sculptural as it may look at first sight, is a highly impractical design. It is much too heavy and the inside is so cut up with sharply protruding edges as to make cleaning hazardous and impossible. I also had the feeling that it was a take-off on the sculpture of Louise Nevelson. How much better Helen Shirk would have handled this problem.

Robert Venturi’s set seemed to me the most incoherent. No piece had any relationship to any other, and the decoration. both the engraved lines and petals and the random gold plating, didn’t go with the form to which it was applied. 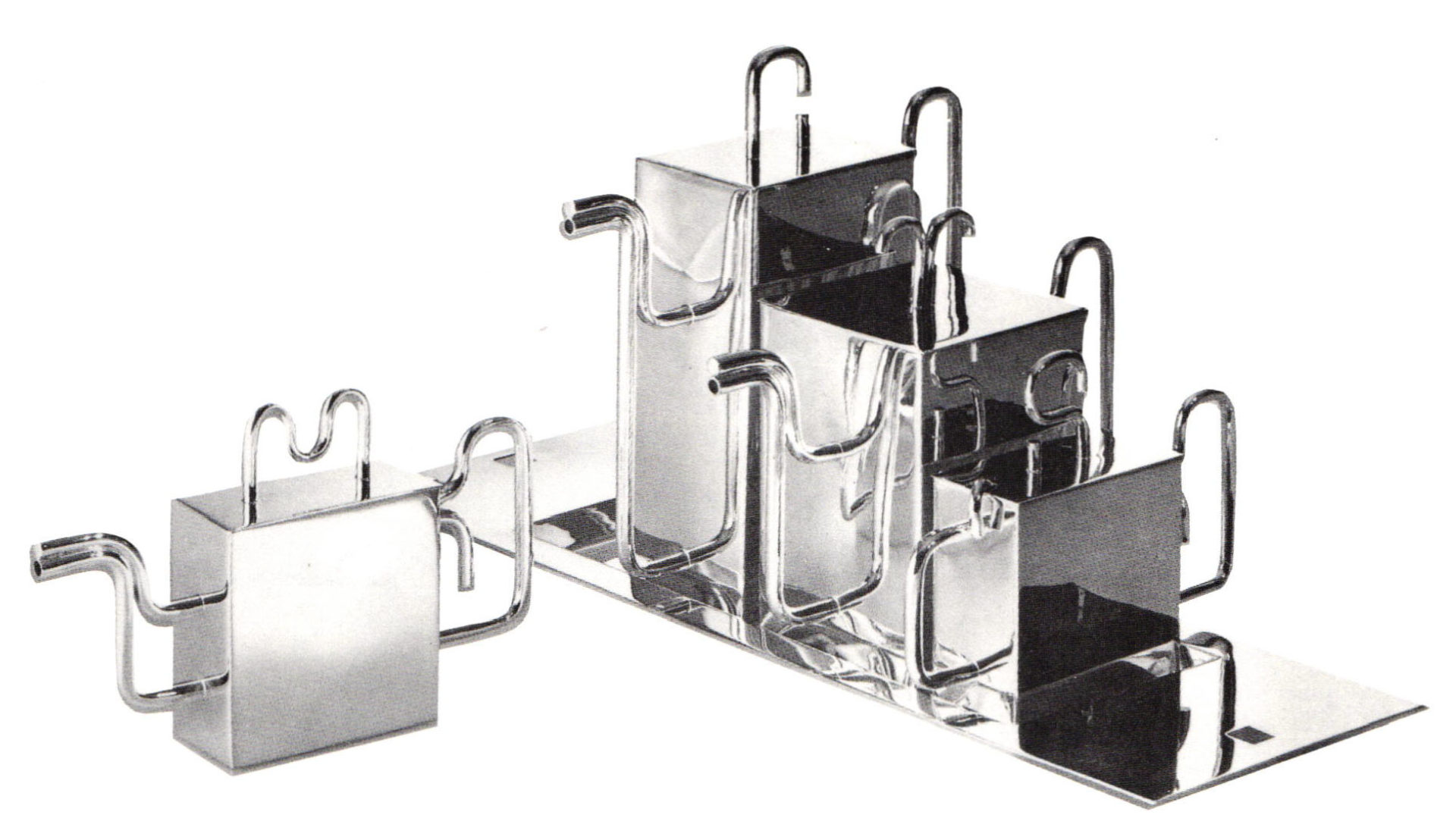 Kazumasa Yamashita designed a set that has simple sensitive proportions. The use of tubing on the lids of the pieces to spell out the first initial of the contents is highly original. The thin tubing used for spouts and handle and the visual continuity of the boxlike containers I found pleasing. However, the set has some serious functional drawbacks. The uninsulated handles and finials on the coffee- and teapots and the much too low starting points of the spouts are likely to present problems in use. Also the tray bent when I picked it up with the empty set on it. An edge around it would reinforce it and could easily remedy that problem.

I should like to congratulate Alessi for having taken the initiative in attempting a breakthrough in the design of silver holloware. Unfortunately, the result is not altogether successful, due to the fact that they asked architects rather than creative silversmiths to produce the designs. It would be equally unrealistic to commission creative silversmiths to design well-functioning buildings. The history of gold and silversmithing of the last 5000 years amply demonstrates that the best silver designs have always been produced by those who actually worked the silver, since they are the only ones who develop the intimate relationship with it that allows them to bring it to its full artistic potential. During my various visits to European silversmithing schools and factories I have become painfully aware of the increasing separation of the designer from the maker. This has resulted in an increasing sterility of contemporary holloware design in Europe with the possible exception of England and Sweden. Let us hope that the American Silver Industry will be inspired by the example of their Italian colleagues and join forces with the large pool of talent in the Society of North American Goldsmiths to present to the American public a new and vital contemporary collection of American holloware.

A handsome catalog of this work, entitled Tea & Coffee Piazza, is available for $10, plus postage and tax, from: Max Protetch Gallery, 37 West 57th St., NY, NY 10019. The coffee and tea services produced in 99 numbered copies range from $10,000 to $30,000. The exhibition will travel in 1984 as follows: Renaissance Society, Chicago, January 8-February 5; San Francisco Museum of Art, February 17-April 11; La Jolla Museum of Contemporary Art, April 28-June 3, and can be seen in the small gallery at Max Protetch in New York through June 1984.

Kurt Matzdorf is professor and director of the gold and silversmithing program, State University of New York, New Paltz