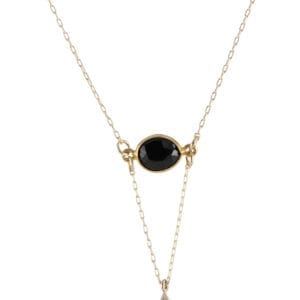 Designers showcase components as the focus of their designs 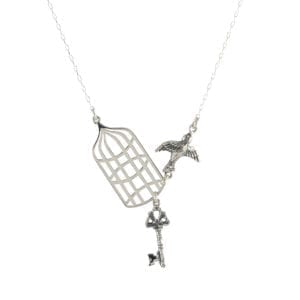 When most folks think of findings, they’re likely to think of jump rings and necklace clasps. After all, findings are there to serve a basic function, such as securing a piece of jewelry around a neck or wrist. But for some designers, findings aren’t just the inspiration for jewelry—they’re the key component, without which the jewelry would not exist.

While showcasing findings as central components of jewelry pieces may seem like a recent development, in actuality its origins can be traced back to ancient civilizations. Nina Cooper of Nina Designs in Berkeley, California, admits to always having been a little nuts about jewelry. Growing up in New York City, Cooper spent a good deal of time at the Metropolitan Museum of Art, studying ancient jewelry. “It was then that I realized that findings are awesome,” she says. “They were always a major part of the jewelry design. It helped inspire me, and I realized that I don’t have to settle for plain vanilla findings that don’t add to my piece. You can combine excellent function with excellent design. If the ancient Egyptians can do it, we can do it, too!”

Cooper’s early exposure to jewelry with well-crafted and unique findings eventually led her to open her own findings manufacturing company. “Any time I made a necklace, the clasp was the ugliest part of it, and I wondered why,” she explains. “I made beaded jewelry and was trying to create artsy, expressive designs. I wanted my findings to enhance my design, not just [be] something that was supposed to be ignored.”

Believing that other designers might feel the same way about findings, she encourages her clients to get creative. To help motivate and inspire them, Cooper makes it a point to publish 10 new designs on her company’s website every week.

“We believe that at the heart of what we do is inspiration,” she says. “We take one component and show how to use it a bunch of ways to inspire designers. If someone’s not sure what they want to create, they can visit the site, and the images might start a chain reaction of ideas. They can look at a charm and get inspiration for an entire collection. Something may spark an idea and get someone excited enough to sit down and start working.”
Inspired Designs

Read on to see how some of Cooper’s clients have been inspired by findings, which have earned a place of prominence in their designs. 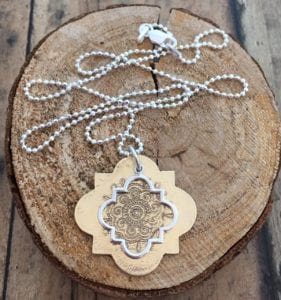 When Amber Rankin of Touch of Whimsy Jewelry in Anacortes, Washington, finds herself in need of inspiration, she turns to her findings suppliers’ websites to see what they have available. “It must be funny to watch me,” she says. “I can spend a lot of time looking at one item, thinking of all the ways I might be able to use just one finding.”

Rankin often orders different pieces so she can play with them in front of her. Once she finds a way that she thinks they look best, “I just go for it.”

That was the case with a charm shape that grabbed her attention. She notes that the shape itself was fairly common: an octagonal variation on a quatrefoil, which has the outline of four overlapping circles of the same diameter. The quatrefoil “is amazingly popular in design right now,” Rankin says. “It’s everywhere.”

Rankin ordered the charm and played around with it, testing out different designs in her mind. Once she struck on one, she traced the outline of the charm on sheet metal and then sawed out the shape. She had ordered the same charm in a smaller size and placed it on top of the sawed out shape. “It looked pretty, but it needed something in the middle,” she says. After tinkering with the pieces, she etched the center of the larger quatrefoil charm with a mandala design. “Adding the mandala design in the center helped bring it all together,” she says.

She had a similar moment of inspiration with another set of findings she had previously purchased. “I had bought a branch connector a long time ago,” she explains. “I had adesign idea in mind for it, but I never got around to making it. Later, I picked up an owl charm. Then, when I pulled out all of my findings for inspiration, an idea formed.”

When she was playing with the findings, she placed the owl on top of the branch and thought it looked cute. “I had to cut off the top loop of the owl since it was a charm, but then I soldered it on top of the branch.” After attaching the connector to a chain, a new necklace was formed.

Rankin, who started her career doing beading, admits that she now assigns more importance to findings. “When I started out beading jewelry, findings were very much just jump rings and clasps,” she says. “I’ve been making jewelry for 15 years, and now that I’m doing metalwork, I view findings very differently. You can use them for so many things and in so many ways. Now I pay attention.” 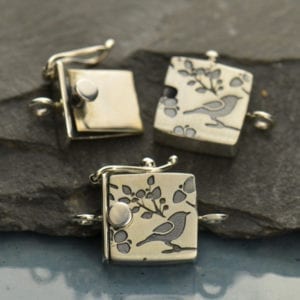 Peggy Li of Peggy Li Creations in San Francisco does a lot of wirework, making findings integral to many of her designs. “Charms and findings are often the focal point of my work,” she says. “I love to look at findings and take them as a jumping-off point for my design.”

She starts many of her designs by first perusing the available findings from her suppliers. When Li came across separate charms of a bird and a birdcage, she fell in love with the components. “I wanted to tell a story with the charms, but I wanted to show the bird soaring out of the cage. To me, there was no better way to represent that than with a key charm.” Li found one easily enough and arranged the three charms in an abstract way to tell a story with her Fly Free necklace.

When Li discovered a new line of spike pendants, she was interested in finding a way of combining them with gemstones to create a piece of contrasts: the femininity of gemstones juxtaposed with the hard edges of spikes. “When I saw the spikes, I wanted to create something with a little more edge, but still fitting in with my design aesthetic,” she explains. “Initially I was thinking of a necklace with tons of spikes on it, but then I pared it down, making a look that was more minimal and feminine.” What became of the pendants was a line of necklaces featuring a gemstone and a single spike pendant. “The focal point is the gemstone, but it’s anchored by the pendant. The contrast of the piece is what I really love.”

And she’s not afraid of doing the unusual. “I enjoy taking findings and not using them at face value,” she says. “I like to mix them up, cut them up, add embellishments to them. I’ll turn a piece sideways or upside down. I don’t think we should be limited to using them as they were originally designed.”

She cites a lightning bolt necklace she created as an example. “I saw a lightning bolt charm that was designed to hang vertically. I wanted to use it horizontally so it would be more integrated with the chain. I soldered on a jump ring so it would hang that way. Sometimes it’s something that simple.” 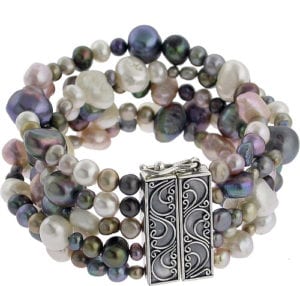 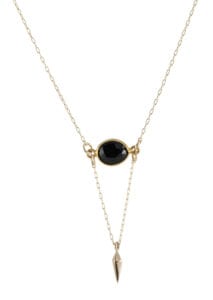 Adding unique components to a finished piece of jewelry isn’t limited to findings. When it comes to accenting their work with interesting chains, jewelers have more options today than ever before, and they’re definitely taking advantage of them to keep up with current trends.

One of the most popular looks of the moment are handmade chains with interesting links, says Barbara Raleigh of International Design Source Ltd. in New York City. “I’m seeing lots of chains made with handmade wire, with interesting and contemporary-shaped links, including mismatched, irregular, and amorphic shapes. They’re very light and airy looking.”

Those light, handmade styles reflect one chain look that’s been trending for a while now in both the fine and fashion jewelry worlds—dainty layering.

“I’m still seeing lots of fine chains,” says Raleigh. “Women are layering multiple 18- and 20-inch length necklaces, often with small pendants. It creates a very dainty and pretty look. They’re being personalized with lots of charms, but the look is still very delicate.”

But dainty and delicate isn’t the only chain look trending with today’s women. Right now, chain styles are hitting both ends of an extreme spectrum. “I’m also seeing very bold curb chains, but with interesting decorations like large clasps or links decorated with stones,” says Raleigh. These substantial chains are creating a very unisex look, which ties in well with current styles on the runway. “The trends in fashion magazines are unisex—you can’t tell the men from the women. Women are wearing suits; men are wearing skirts. This unisex dressing is now affecting the accessories worn with them.”

When it comes to the metal of choice today, it’s all about yellow gold. “As we head into winter there will be a lot of grays and blacks coming up in fashion, so there will still be a silver look, but I’m seeing much more being done in yellow gold. It’s definitely on an upswing right now, and it’ll become even more prominent in the spring,” she says.

And chain isn’t being used to accent just the body. “What I’m looking at now for the future goes beyond jewelry,” says Raleigh. “Every purse, shoe, and belt is decorated with something. Designers like Dolce & Gabbana, Dior, and Chanel have chains up the wazoo on their handbags. Chains are everywhere! Chain and findings companies would do well to start looking at these additional outlets.”