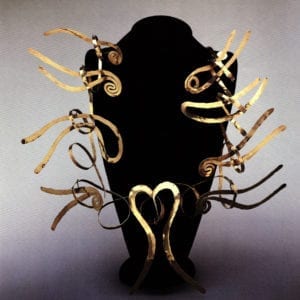 The Intimate World of Alexander Calder

The real Alexander Calder is to be found in the intimate work – the toys, gadgets, jewelry – those delightful preoccupations of his that often get overshadowed by the big mobiles that hang in many public spaces. It’s no wonder that walking through this show, you only have to watch the audience’s reactions to realize how much life Alexander Calder puts into this work. With remarkable ease, he teases you, excites you, astonishes you, does with you whatever he wishes. 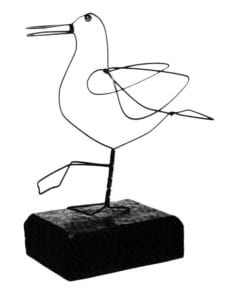 Upon entering the show, I noticed two children chuckling over Calder’s tin birds (his toys are truly irresistible); but then, there was even a greater commotion of laughter coming from a room where a film of Alexander Calder performing his circus was being shown. Suddenly, there were not only kids, but parents and grandparents having a good time, infected by Calder’s antics.

Alexander Calder never lost his childhood. The reality of adulthood gave only more depth to his wit and craftmanship. Seeing the wire sculptures, I found myself again and again startled by his ability to take wire and without much struggle animate the simple profiles of people, animals, fish, etc. This is where Calder’s genius dominates his craft. Anything is possible for him. Though the individual elements might be merely found objects with a former life and purpose, Alexander Calder transforms them. He sees beyond the objects’s former identity, reshaping them to respond to human characteristics and moods with a sense of spatial animation that hos no comparison in the arts. Movement is the key to much of Calder’s work, not only in the physical movement of the mobiles, but also in the suggestion of movement in the rest of his work. <div class="adframe"> <div class="adframe300x250"> <div class="adframe300x250label"> <i class="fa fa-gem icon"></i> Ganoksin is sponsored by</div> <center> <div id='div-gpt-ad-1479837244275-0' class="ad-item" style='height:250px;'> <script> googletag.cmd.push(function () { googletag.defineSlot('/87578358/ganoksin-paragraph-1', [ 300, 250 ], 'div-gpt-ad-1479837244275-0').setTargeting("topicid", ['jewelry-design']).addService(googletag.pubads()); googletag.pubads().setCentering(true); googletag.pubads().enableSingleRequest(); googletag.enableServices(); googletag.display('div-gpt-ad-1479837244275-0'); }); </script> </div> </center> </div> </div> 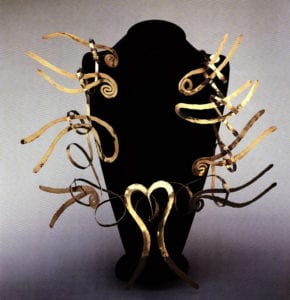 Especially in the jewelry, I find Calder’s familiarity with metal and techniques a great surprise. The material is wire and his tools are the hammer and pliers – that’s it for technology. The results from this basic setup, however, are anything but simple. For example, I particularly like the Running Fish brooch from 1942. The way he hammered the silver wire, the sensitivity in shaping the fish, tells you something about control and on understanding of the medium. Then there are the thin legs running under the weight of the heavy fish shape. Only with Calder’s wit and play on movement is it possible to bring about a harmonious art with very little technique. The same is true for the famous fish bowl from 1928. There is no flow nor doubt in the handling of the wire line. Plants, fish, snail, outline of bowl and water level create on illusion of nearly subconscious depth. The artist’s mind working to forge complexity, the piece newer looks flat or confusing but constantly changing.

Even the utilitarian pieces, like The Fork from 1950, maintain a highly developed sense of form. The suggestions of hand and forearm in the shape express the connection between the object and its use. In a Ring from 1950, five, maybe ten, blows on a piece of brass tell you all about the conception of form. One of the best examples of Calder’s ornaments is the royal Harp Harts necklace from 1950, which displays his full range of features, like the unbroken line, movement and direct construction. Each time I see this masterpiece, I think of it being worn by someone immediately transformed into royalty. 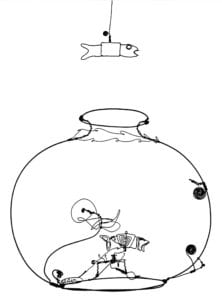 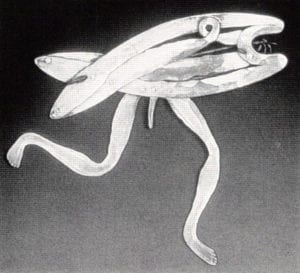 The exhibition, “The Intimate World of Alexander Calder” was shown at the Cooper-Hewitt Museum in New York from October 17 to March 11, 1990 and travels to The Minneapolis Institute of Arts from May 6 to July 15. A beautifully illustrated and inspiring 400-page book of the some name by Daniel Marchesseau, Curator of the Musée des Arts Decoratifs in Paris, where the exhibition originated, was published by Solange Thierry Editeur, Paris and is distributed in the United States by Harry N. Abrams, New York.

Pavel Opocensky is a jeweler and sculptor living in New York.

All articles by this author
Previous An Interview with Garth Clark
Next June Schwarcz: The Malleable Vessel
Social media