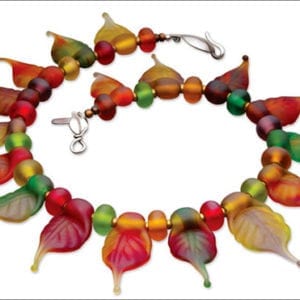 A mesmerizing flame melting spectacularly colored glass into a perfect bead. The possibilities of infinite shapes and sizes. The beautiful jewelry those beads can become. All of these factors pulled Mary V. Smith of St. Peters, Missouri, into lampwork — the art of using a torch to melt glass rods into beads.

A corporate graphic designer for 20 years, she saw her industry changing in the ’90s and felt her creativity being stiffled by new technology, so she began exploring her options. She had dabbled in making jewelry and loved going to the St. Louis Art Fair. “I went to school for fine art and graphic design,” she says. “I had to do something with my hands. I tried to transfer some of my knowledge and color theory into jewelry.” 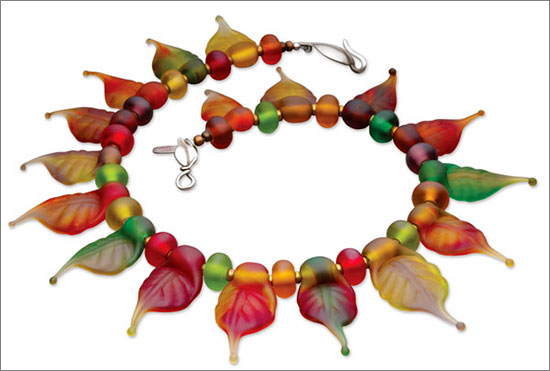 Lampworking is all about amazing combinations of color. The process begins with a steel mandrel, a torch, and a glass rod. Smith coats the end of the rod with bead release, a material that allows the glass to adhere but come off later. Holding the glass in the flame, she spins the mandrel in a slow circle, wrapping the glass around it, pulling it in and out of the flame until the bead is the shape she wants. When the glass begins to cool, she adds other colors. The completed bead then goes into a kiln for annealing to strengthen it.

“In lampworking, there’s a relationship between the flame and you as you slowly go in and out of it,” says Smith. “You cannot rush the process. It’s almost like a slow dance.”

Soon after her first glass bead making lesson in 2000, Smith rented workspace in her instructor’s home studio and developed her skills. She began building a clientele, but lacked confidence in her abilities. Her Fall Leaves necklace (right), a six-month project, transformed her into a professional in her mind due to its complex nature and successful result. When molten, the red, orange, amber, and olive green glass look the same. On top of that, the red and orange are “striking” colors — the most difficult glass to work with, says Smith. “When using striking transparent red and orange, you must re-introduce the finished bead back in the flame at just the right time to bring out the true color of the glass,” she explains. If the moment is missed, a brown bead results after annealing.

“I remember getting the necklace done and putting it on,” she recalls. “I had a big mirror for customers to try on jewelry, and I finally felt like I was more than just playing around.”

From that point forward it has been game on for Smith, who describes her jewelry style as “fun and feminine, with a contemporary twist.” She now works in a home studio, sells her jewelry online and at major regional art fairs, and is on the faculty where she had her first lesson. And she’s still making new discoveries every day.

“There’s not a day that I sit down at my torch that I don’t learn something new,” she says. “I think that’s probably some of the addiction for me. I always want to keep learning.” 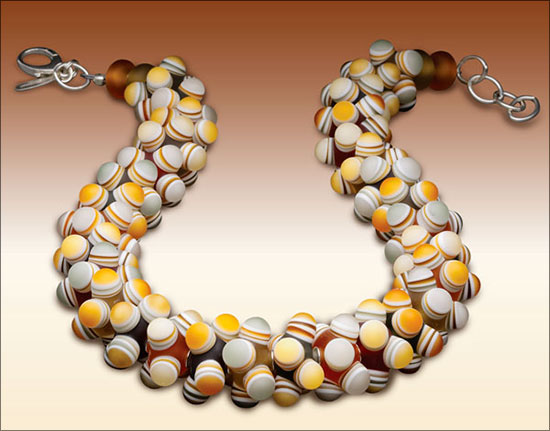 Mary V. Smith uses soft, soda-lime glass from Murano, Italy, to construct her beads because she says it’s “consistent and stable in the flame.” After first crafting the design of her Carmelized necklace in opaque black, white, and gray glass, she thought, “Wow, if it looks like this in opaque, what if I can get it to work in transparent?” (Because opaque glass is stiffer, it can be easier to work with.)

Carmelized took approximately 80 to 120 hours to make, and it won second place in the beads category of the 2009 Saul Bell Design Award competition. Smith wanted the necklace to appear as though it comprises many individual beads, but it actually has 31 interlocking beads with six nodules on each. “I had to play around with it to get the nodules not to melt into each other as I was laying down the colors,” she says. With six nodules on each bead, they’re in the flame for about 8 to 12 minutes.

All lampwork beads have to be annealed in a kiln to strengthen them, but knowing when to anneal is vital. The glass has to cool slightly but not too much, and the success — or failure — of the bead often isn’t visible until after annealing. Hot glass is usually dark so it masks the delineation of colors.

To create the 31 beads in Carmelized, Smith used a lampworking torch and a 13 inch long by 3/32 inch diameter steel mandrel. (The diameter is the final size of the holes in the beads.) Holding the glass in the flame, she spins the mandrel in a slow circle, wrapping the glass around it, pulling it in and out of the flame until the bead is the shape she wants. When it begins to cool, she adds other colors, varying the order of layers from bead to bead.

It’s a very delicate craft. “I’ve cracked the center beads before when I’m making them because I’m so focused on the heat of the nodules that the base bead can cool off enough to crack,” says Smith. “When that happens, you’ve lost your work.”

After annealing, Smith secures the mandrel in a vise grip and twists off the beads. Under running water, she cleans out the chalky bead release residue in the holes with a diamond bit reamer. She etches the beads by immersing them in Etch Bath for 4 to 5 minutes, which takes a bit of the surface off the glass, giving it depth and softness. “I get such a great response to the etched glass,” says Smith. “It’s by far what I sell most.”

Strung on a double thickness of woven stainless steel Soft Touch Wire, Carmelized has 5.6 mm sterling silver bicone beads between each glass bead, adding to the illusion that the beads are interlocking.