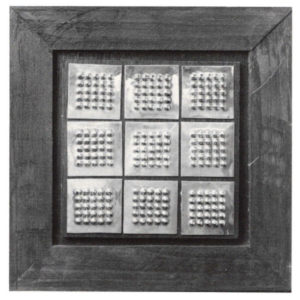 From the very cover of the announcement brochure, one sensed the struggles and conflicts represented in the work in this often-puzzling show. Even though I consider Curtis LaFollette a good friend, I do not completely subscribe to the more obscure conceptual aspect of some of his work, nor am I particularly entranced by concrete poetry; therefore, I feel free to be objective in reviewing his work.

First, let me deal with those pieces closest to holloware, in more conventional silversmithing terms. (Curtis was trained in metals and design at Cranbrook). There were two dazzlingly sleek, nonfunctional “containers,” highly chromed and comprised of truncated cylinders balanced at gravitationally “impossible” angles (a feat accomplished with internal weights). They were very exciting in concept, evoking a kind of pull between elegant restraint and giddiness, and pointed toward a potentially fascinating series of further explorations. But there were only two. 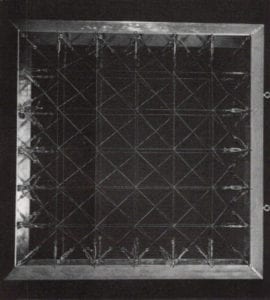 “Too few” proved to be the major criticism of this collection of work, executed in the last three to four years. This is a criticism of which Curtis is well aware. While a very accomplished and meticulous metalsmith, Curtis is also intrigued and stimulated by several other media and sensibilities which vie for time and space in his creative output. Besides his conventionally constructed “holloware,” there are a few raised copper forms, painted black, and evocative of the globe of the Earth. They seem to relate to an abiding interest in the earth, an interest which probably stems from Curtis’s early life on a farm.

This interest is now manifested with great passion in his intense concern for the threatened Earth, its ecology, its creatures and so on. Evolving from his “earth” interests is a series of pierced and folded sheet metal wall pieces. Based upon grids, they evoke aerial-view landscapes of midwestern farmland in some instances, while in others they reveal Curtis’s subtle, playful interruptions of grids, something he also enjoys doing with a grid of words in some of his concrete poetry.

From the piercing and folding of the triangular openings in sheet metal, one can trace the development of several pieces of folded triangular sculptures, either floor or wall-mounted pieces. However, one is again startled by some of the pieces being executed in sheet metal while others were done in transparent plastic. This reinforces the original impression that here is an artist fairly bursting with several strong directions but having a difficult time concentrating on each one long enough to mine it for its fullest potential. Curtis and I often lament the lack of pure, unfettered lime in our creative lives and its effect on our work; the feeling of seldom seeing through a good idea to its logical end before zooming off on another tangent, the transitional pieces perhaps only conceptualized but never put into concrete form. Of course, this is a lament shared by most artists.

Another extension of his interest in grids has led Curtis to develop several pieces of tension sculpture some of which reach their esthetic best when the implied tension of the wire grid actually seems to pull and deform the angle-iron frame. The inherently strong and rigid reputation of angle-iron, now deformed, enhances the perception of intensity of pull from the wires. One could have enjoyed more investigation into this potentially rich medium, but there were only a few. 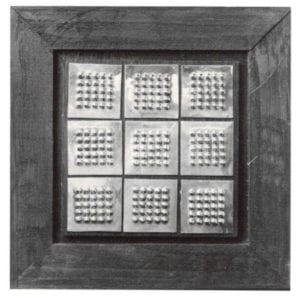 One of the most significant facets of this multifaceted man is a very strong political conscience which demands expression. The obvious medium for most political critics is the printed word. Others express themselves visually as political cartoonists. Curtis, however, seems to find his greatest artistic and political expression currently in concrete poetry, where the printed word is augmented by positioning and size on the page. He is obviously distraught by the stupidity of the “arms race” and other ills of humankind and says so, emphatically, with witty and cutting statements.

Although I frequently bridle at being spoon-fed via the intense selectivity and repetition one often finds in gallery shows of an individual artist’s work, I feel that Curtis’s show would have benefitted enormously by more rigorous selection or more explanation of the evolution of the various concepts shown. Curtis is also aware of the divergent nature of his artistic expression over the past three years but simply has not found the time to make amalgams. Hesitant though I am to try to influence any artist’s work, I cannot help but urge my friend to create combinations of some or all of his current media and forms, the resultant statements from which could be powerful, indeed.