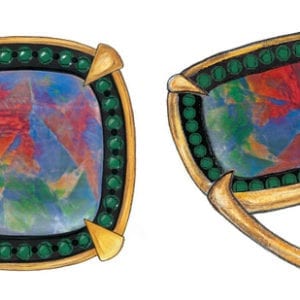 Read through the stories of each of the three brilliant jewelry designers who created very intricate and beautiful jewelry pieces using the dynamic opal.

That was the deal I struck with the three willing designers whose imaginative jewelry pieces you’ll see on the following pages. Once they accepted the challenge to design around this fabulous opal from DuftyWeis Opals Inc. in Maysville, Kentucky, there was no turning back.

Mined in the Coober Pedy region of Australia, the opal has a dynamic play of color and a rather traditional shape-a combination that proved both challenging and eye opening for the designers. Measuring 13 mm long by 12 mm wide by 3.7 mm deep, this 4.43 carat gemstone inspired three unique jewelry pieces that command attention. The stories behind their creation follow.

When Nicole Landaw first laid eyes on this opal, she felt rather conflicted about it. “The shape of the stone is so ho-hum, but the color is so rock ‘n’ roll,” says the New York City — based designer. “Those two polarities made it challenging for me to incorporate the stone in a way that is my own voice.” 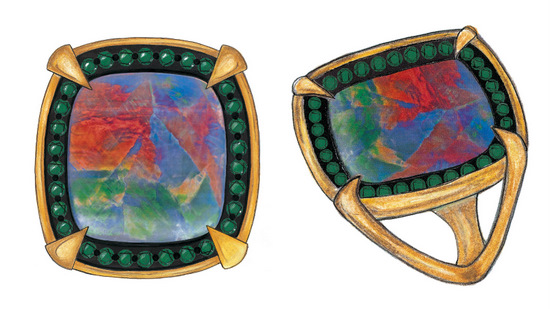 Recently, Landaw has begun having stones custom-cut for her line. She enjoys the freedom this allows her to truly integrate a stone and its setting. “I don’t have to accept a stone as-is,” she says. This time, however, she was stuck with the shape-and her first reaction was to fight it.

“I spent a lot of time initially trying to cover some of the stone and make it look more organic and less sharp on its geometries,” she says. “My own natural instinct was to create a shape for it, but I realized that by doing that, I wasn’t respecting the stone with my design vision.”

Landaw was torn. She needed some time to think about what to do with this stone that had the most amazing play of color encompassed in the shape of a “television.” Fortunately, she had a good excuse to take a break from the opal-she was headed for vacation at a friend’s house.

While staying with her friend, she had a flash of brilliance. A painting by Victor Vasarely that hung on the wall commanded her attention. It featured very deep colors-blacks, blues, reds, and greens-that were rich and enchanting, much like the colors in the opal. But the frame was all wrong. Its light-colored matte and frame did nothing to enhance the vibrancy of the painting. Suddenly, Landaw was inspired: The amazing play of color in the opal deserved to be treated as a piece of artwork, framed in something as deep and rich as the stone itself. She knew at that moment that she wanted to put a picture frame around the opal-a black gold frame set with tsavorite garnet.

The rest of the design seemed to flow from there. “I like a big ring, so designing the opal into a signet ring was a natural choice for its traditional shape.” But Landaw realized that she’d have to pay close attention to her fabrication choices when setting the opal, which is delicate and prone to cracking or chipping.

“Since it would be worn on the hand, I had to find a way to protect the stone from a direct hit on a hard surface,” she says. “I needed to create a sort of bumper for the opal.” She did so by setting the opal into a seat cut along the black gold frame, and setting that frame slightly lower than the 18k yellow gold bezel. The yellow gold is elevated just above the tsavorite pav?, which Landaw chose to accent the green color of the opal. “The tsavorite really pops in the black gold,” she says.

The four prongs that hold the opal in place are dimensional and rounded, ad-ding yet another layer of protection to the fragile stone. The prongs extend from the ring’s shank structure, which is sculpted and organic. “The openness of the ring gives it an organic feel, the signet style showcases the traditional shape of the stone, and the use of pav? on black gold makes it contemporary,” says Landaw. “This variety complements the exuberant character of the stone.”

“Opals get a bad rap,” says designer Jane Wullbrandt of Atlanta. “Consumers who come to me with that Old Wives’ Tale [about opals being bad luck] are in for an education in opals-and they love it.” 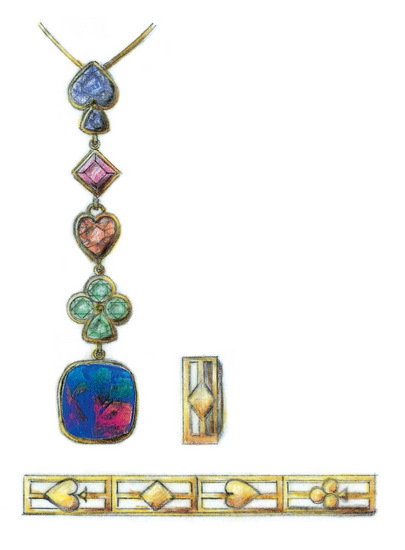 Wullbrandt introduces consumers to the many varieties of opal while debunking the myths about the stone. “Consumers love acquiring knowledge about gemstones and jewelry pieces,” she says. “We are such an information-centered society. With the Internet at our fingertips, we can be experts in any area we choose in a matter of minutes. Consumers want to be experts about their jewelry, too. They want to know the story about the design.”

The story behind Wullbrandt’s “Play of Color” necklace starts with the opal. “This opal has such an incredible play of color and is so standalone gorgeous that I thought it shouldn’t be framed by anything too busy,” she says. While thinking about the best design for the opal, Wullbrandt was working on her upcoming trademarked GemFrames line, which features gemstones cut in unique shapes. “I had unusual shapes on my mind, and I knew immediately that I wanted to drop this opal from some uniquely shaped gemstones in a pendant.”

What those unique shapes would be was yet to be determined. Her initial sketches showed kites, barrels, hearts, and fans. She sketched a few variations on this theme, but scratched them all after chatting with her significant other as he picked up after a poker game. The deck of playing cards caught her eye, and the design was born.

She decided to create a drop pendant with gemstones shaped like the card suits. The suite of colors, which includes a tanzanite heart and trillion for the spade, a pink tourmaline square for the diamond, a mandarin garnet heart, and three green tourmaline rounds and a trillion for the club, is anchored by the opal. Wullbrandt bezel-set the gemstone suits and attached them with jump-ring connections. For those shapes that require more than one gemstone (the spade and club), there is a prong set in the middle, where the gemstones touch, to hold them in place.

“And the opal gets the royal treatment,” says Wullbrandt. “Its bezel has an openwork undercarriage with the four card suits each displayed on one side of the stone.” The openwork is evident of Wull-brandt’s signature style, which is architecturally-based and inspired by wrought iron work. “I always want my designs to be interesting from all angles, and this treatment allowed for that, as well as offering extra cushion on all sides of the opal.”

Wullbrandt says that she intends to make this piece-and tell the story of its creation to customers. “Consumers love to know about the design process,” she says. “We designers have been thinking like this our whole lives. It’s hard for us to realize that others aren’t running around with Post-it notes jotting down ideas and sketching things all the time. The consumers want to hear our stories.”

Like the other designers who participated in this project, Elizabeth Gualtieri of Zaffiro in Portland, Oregon, was enchanted by the opal’s play of color. But what really struck her, and thus served as the inspiration for her design, was the veining in the stone. 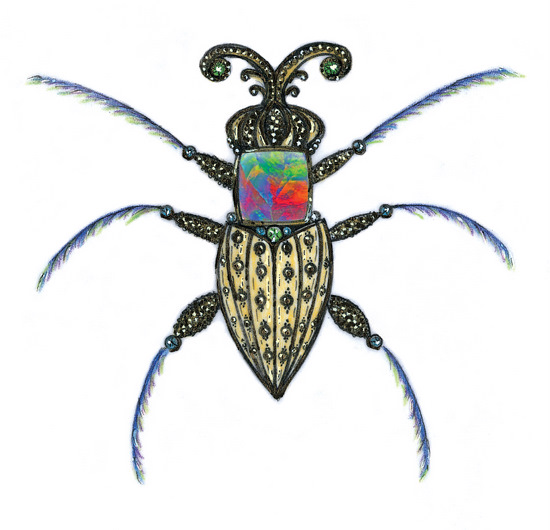 “Initially, it suggested a leaf form, but the shape of the stone doesn’t lend itself to that, so I didn’t want to force the design,” says Gualtieri. After some contemplation, she made the leap from flora to fauna, settling on a beetle.

“The colors and the veining in the stone reminded me of an iridescent beetle,” she says. “I wanted to construct an elaborate 22k beetle pin using the opal as the focal point on the body.”

Her first priority was to create an anatomically correct bug. To do so, she consulted her reference library, which includes Cabinet of Natural Curiosities by Albertus Seba, a mid-18th century book filled with drawings of insects, including a number of beetles.

“I decided to construct the piece in several parts: the head, the central body part (where the stone is), the back, and the legs,” she says. “Each section has a different scale, wirework, and granulation pattern, so each would require a different amount of heat to fuse properly.”

The opal is bezel set, and each remaining component part is repouss?d (the process of raising metal by hammering on the reverse side) and granulated, the latter of which is Zaffiro’s signature style. The back and the head feature decorative wirework, a design element that Gualtieri chose for two reasons. “The wirework is important because it not only echoes the striking veining in the opal but also pays homage to John Paul Miller.” Miller is credited as being the first American granulation artist and is well known for his line of beetles, moths, and snails, which feature a similar combination of wirework and granulation.

In the granulation on this piece, Gualtieri wanted to create a mix of random and ordered patterns. The granulation on the beetle’s back is very purposely patterned, whereas the granulation on its head and legs is random, featuring a mix of granules in different sizes and in no defined pattern. “Seba’s illustrations are beautiful, but they represent an Enlightenment-era naturalist’s desire to impose order in the natural world. I loved the idea of translating that sensibility into a highly decorative form and having it juxtaposed with the random beauty of the opal and small areas of deliberately random granules.”

As she usually does in her work, Gualtieri added a few subtle bursts of color into the design to carry through the dynamic play of color in the central stone. She set a tsavorite garnet flanked by two blue zircons where the opal bezel meets the back, as well as two tsavorite garnets in the beetle’s antennae. As a final touch, she chose to accent the entire piece with peacock feathers set inside small tubes that are hidden behind the beetle’s legs. She used the iridescent parts of the peacock feathers, which are predominantly blue and green with flashes of purple, to add an unexpected element to this bejeweled curiosity.