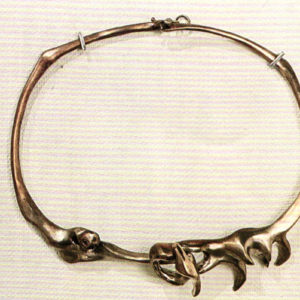 Claire Falkenstein is a master of linear metal sculpture. Hers is not an art of solid form, as relating to space and mass, but of a cursive gesture – a scribble in the air. It is essentially a public or display art and is directed not to the private sensibility but to the collective unconscious. Falkenstein has invariably identified herself with her drawings; the linear emphasis in her work can readily be seen in her architectural commissions, as well as in her jewelry. “She sees metal as an extruded material – not as a solid mass. She creates the volume necessary for the sculpture by linear definition. She is obsessed by movement rather than mass, by rhythm rather than repose.”

During the 1950s, Falkenstein’s sculpture succeeded in interpreting the Abstract Expressionism of painters such as Jackson Pollock, Sam Francis and Clyfford Still. Her contribution to metalwork is all the more impressive due to the difficulty of expressing the complete freedom of action painting in a reluctant medium. Hammered metal does not naturally lend itself to the same spontaneity as painting, yet Falkenstein has managed to evoke a dynamic abstraction in her sculpture and jewelry. She was regarded by Michel Tapie (an important midcentury art critic) as the quintessential exponent of “art autre” – that form of expression that came to life after both the classicism of Cubism and the outrageousness of Dada dwindled and faded from the art scene. 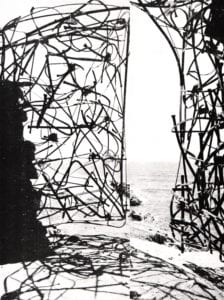 Falkenstein’s artistic aim was to create forms that gave substance to the mysteries of the universe. To this end, she used a personal vocabulary of symbols, as metaphors for the teachings of Pythagorean mathematics and modern science, especially Einsteinian physic. Her three most significant motifs are the “moving point,” which alludes to Einstein’s theory of relativity, “interstices,” which emphasize the spaces contained by matter, and the “never-ending screen,” which symbolizes infinity – the ever-expanding universe. This last sign is the most important in that it represents the most crucial element of her forms, continuity, the concept that forms one of the bases of present-day topology and by which the entire perception of spatial/formal relationships has been challenged. Falkenstein has explored these themes in monumental, as well as small, sculptures and jewelry.

Claire Falkenstein has born in Coos Bay, Oregon on July 22, 1908. She graduated from the University of California at Berkeley in 1930. In 1934, she received a grant to study with Alexander Archipenko at Mills College in Oakland, California. When I asked her to comment on the influence, if any, that the great Russian sculptor might have had on her work, she said that he hated anyone to copy him, although she did acknowledge his effect on her oeuvre, unconsciously, if not consciously. For example, there exists a definite formal connection between the general angularity and fanlike protrusions in a silver necklace of Falkenstein’s from the 1950s and Archipenko’s polychromed bronze sculpture, Woman With Fan from 1914. Falkenstein admits to being inspired by Brancusi, especially Bird in Space, which seeks to materialize the concept of flight, continuity and infinity. Brancusi, of course, achieved this through a sleek gesture in shiny bronze, while Falkenstein’s endless screen express their organic repetitiveness with convoluted wire. 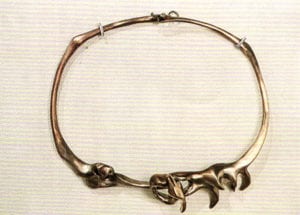 Falkenstein worked in San Francisco until 1950 when she moved to Paris. From 1940 to 1950, she exhibited in America, mostly at the San Francisco Museum of Art and Gallery Meyer in New York, and several times in Paris. In 1950, after she moved to Paris, she often collaborated with architects and engineers. Her first great commission was in 1954 – the stair screen for Galleria Spazio in Rome. It was constructed form mild steel and fused glass, a collaboration with architect Luigi Moretti.

This was followed by the grotto gates for the villa of Princess Pignatelli, also near Rome and with Moretti, in 1957 (Figure 1). These gates, too, were forged from mild steel with Venetian glass inclusions. Their inspiration stemmed from her admiration for Antonio Gaudi, whose biomorphism is reflected in Falkenstein’s necklace from 1951, as well (Figure 2). The exuberantly organic undulations of the Pignatelli gates recall various natural forms – spider webs, vines or bared tree branches. The genesis for this and other never-ending screens may also be seen in Falkenstein’s own wire drawings from the 1950s, in which the exploration of negative space is paramount. This emphasis on the void is well illustrated in the insterstices between the bits of twisted wire in the monumental gates (1961) done for Peggy Guggenheim’s palace in Venice, as well. 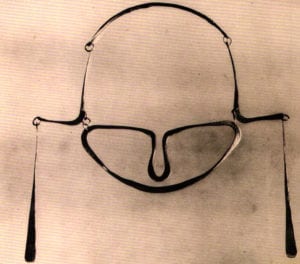 Claire Falkenstein made her first piece of jewelry around 1944 or 45 on the occasion of her winning an international award for wallpaper design given by the Association of Interior Design. She decided to wear a knitted, turbanlike hat to the award ceremony and desired an ornament for it. To that end, she forged a three-dimensional brooch incorporating two circular shapes and measuring about five inches long. However, Falkenstein is adamant about her her belief that jewelry is “not bijoux” – not purely decorative in intent – but related, conceptually, as well as visually, to her sculpture. “Jewelry [making] is the best schooling I ever had,” she told me. “[One] can make mistakes, experiment in structure, design and relationship to the human body.” This view-point is consistent with sculptor Ibram Lassaw’s belief that jewelry serves as a maquette for the metal sculptor. It is a method of sketching the large pieces in a nonpressured, playful fashion, to work through ideas.

In 1948, the Walker Art Center in Minneapolis held the first in a series of traveling exhibition/sales, entitled “Jewelry for Under $50,” in which Falkenstein participated. She was also represented in a similar exhibition at the Brooklyn Museum in October 1955. Falkenstein concentrated on jewelry when she moved to Paris in 1950, until about 1952, partly because she didn’t have much space or money to buy materials for sculpture. She worked in iron, brass, cement and cast plastic resin. It was also the period when she first began welding, using cheap stove wire to create complex baroque structures that enclosed individual spatial modules, because it was all she could afford. Edgar Kaufman, Jr., then director of the design department at the Museum of Modern Art in New York, saw Falksenstein’s jewelry in Paris, about 1953, and soon after bought two pieces from Betty Parsons (her New York dealer) for MoMA’s permanent collection. The jewelry was shown in MoMA’s permanent collection. The jewelry was shown in MoMA’s “Art for Use” traveling exhibition. During that period, Falkenstein’s jewelry was also shown at the Werkbund in Berlin (1952), the Institute of Contemporary Art in London (1953), Galleria Montenapoleone in Milan (1954) and Galleria Spazio in Rome (1954, 55 and 59). 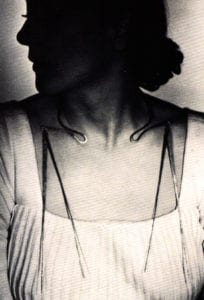 Falkenstein made “conventional” necklaces that fully encircle the neck (Figure 3), those that hand around the back of the neck and remain open in front (Figure 4) and C-shaped pieces that hang asymmetrically (Figure 5). One of her greatest contributions to midcentury jewelry design was to open the side of the necklace, which she did for the first time in 1952. The significance of this innovation lies in the effect of allowing the curve of the neck to continue in one uninterrupted sweep, rather than creating a delineation between the shoulders and face as traditional necklaces do. The design also illustrates Falkenstein’s application of her principles of continuity, as the organic forms of her jewelry posit the human being as integrated with nature. Swedish jeweler, Torun Bulow-Hübe explored a similar asymmetrical concept in the early 1950s, while American, Art Smith (Metalsmith, Fall 1987) forged C-shaped necklaces, as well, 1953.

Although Falkenstein disavows any conscious connection with other contemporaneous sculptors or jewelers, she is a product of her era and shares a comparable esthetic with others artists and designers working in the 1940s and 50s. The most obvious comparison is with the jewelry of Alexander Calder. Falkenstein considers Calder’s jewelry more formalized, hers freer. But the contrast doesn’t end there. One of the most salient features of Calder’s jewelry was his handling of the metal medium and its particular processes. His jewelry was primarily concerned with technique, while Falkenstein’s aim was to depict the same signs and symbols used in her sculptures and environmental works. Her jewelry is replete with content, whereas Calder’s is more naïve; that is, he was expressing the most basic, empirical approach to working metal – the result being his version of what a primitive metalsmith might produce. Whereas both Calder and Falkenstein created large-scale jewelry, the latter’s was far more body-conscious and more sensitive to the effects of the wearer’s movements. 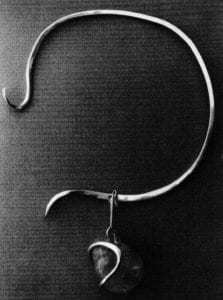 In this respect, Falkenstein’s jewelry was more akin to Art Smith’s. Both regarded the body as an armature on which to hand sculptural jewelry and thereby created large, dramatic pieces with a potential for movement. Also, both made necklaces that encircled the back of the neck but remained open at the front or side. Additionally, there are examples of jewelry by Falkenstein and Smith that employ metal springs to hold stones in place by tension. These mechanical similarities between the jewelry of Claire Falkenstein and Art Smith, perhaps hide the fact that their intentions were quite different. Ibram Lassaw’s purpose in jewelry design reveals in closer affinity to Falkenstein’s, although their methods differ. Lassaw, while employing organic metal forms to define cosmic phenomena, resorts to fused molten bronze to depict the atomic structure of nature while she uses forged wire to define modules in space. Falkenstein’s expression is freer; more is left to the viewer’s imagination.

Claire Falkenstein must have had a great influence on several midcentury jewelers, including Californian, Bob Winston, New Yorkers, Adda Husted-Andersen and Pearl Schechter and in the nestlike forms of Southerner, Earl Pardon. Irena Byrnner, who lived in San Francisco in the late 1940s, wrote: “…During this same period [late 1940s] I saw my first piece of contemporary jewelry – a necklace by Claire Falkenstein. It enchanted me… At this time I knew I would have to choose a new creative medium [other than sculpture]…I wanted to be free to express myself with sincerity and a craft seemed to offer this…Jewelry seemed less limiting [than pottery], and after serious consideration, I chose it. Claire Falkenstein’s necklace was a contributing factor in this decision.” 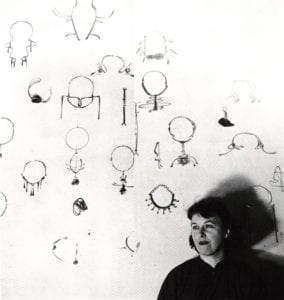 Falkenstein’s jewelry was exhibited in the “First International Exhibition of Modern Jewelry,” held at Goldsmith’s Hall in London in 1961 and in “Jewelry by Painters and Sculptors” at the Museum of Modern Art in New York in 1967. She left Europe in 1963 and set up a studio in Venice, California, where she still lives and works.

As recently as December 1986, in conjunction with her retrospective at Jack Rutberg Fine Arts (New York and Los Angeles), art critic, Merle Schipper wrote: “…despite the diversity of mediums this remarkable artist has explored [s]he has combined a highly inventive sensibility with an awareness of contemporary movements and masters and to developments that have been in the air… [S]he continually reassessed her basic vocabulary – from discontinuous reflective surfaces of curved flat metal plates to networks of thick, coiled rods gripping chunks of glittering colored glass… Still attuned with the times…, Falkenstein continues to update those forms [and] vigorously declares herself timelessly young.” She is still most active at age 82 and has just completed a solo exhibition, “Chasing the Line,” at the Consejo Valley Art Museum in Thousand Oaks, California.

All articles by this author
Previous Charles Loloma: Spirit of the New
Next Cultural Myths Defining Jewelry
Social media