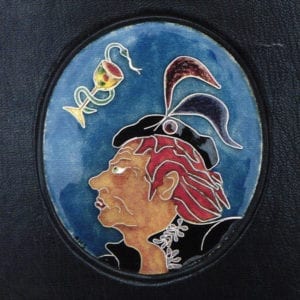 Antonia Schwed A Life of Creativity

Antonia Schwed, who died peacefully in September 2006, was one of the great enamelists of our time, and a pioneer of the enameling renaissance in America. However, she was not a self-promoter, but worked quietly and tirelessly both to promote the medium of enamel and to help new artists in the field. 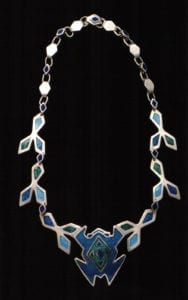 She was born in Staten Island, NY, but moved to Bermuda at the age of 4. She lived there for the next 8 years. Her background was a complex one – her parents separated when she left Bermuda. Her mother, Elisabeth Sanxay Holding, a well-known and acclaimed mystery writer (one of her novels was twice made into a movie), moved Antonia and her older sister Skeffington to New York City, where she intended to work on her writing. For years afterwards, Antonia and her family lived a roller coaster life…at times almost homeless because of a shortage of funds to pay the rent, at other times-when cash was plentiful from a newly sold mystery or magazine serial-they would be off on a luxury cruise to South America. 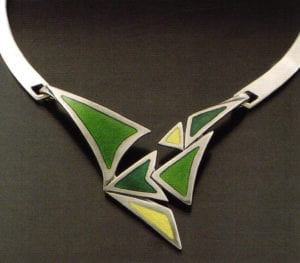 After early graduation from high school, Antonia attended Barnard College for one year before switching to Finch College for business courses to help support the family. (She received scholarships for both schools). Antonia worked a variety of jobs, including at The New Yorker and at Simon and Schuster when she met Peter Schwed (an editor at Simon and Schuster) whom she eventually married. Over the following years, she raised four children, kept house, and entertained many of the great writers of the time, including David McCullough, P.G. Wodehouse, Christopher Isherwood, Jack Finney, and many others. However, it was when she started taking silver jewelry classes with Margaret Sussman at the Craft Students League that she discovered her passion for jewelry and enameling. 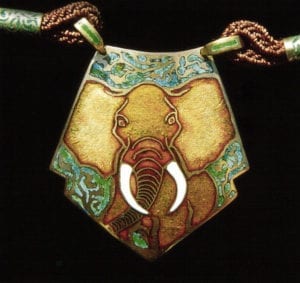 From that point, she went on to become a teacher of enameling, first at the Craft Students League (11 years), later at the 92nd Street Y (5 years). Her reputation grew as an inspirational teacher who extracted the best from her students. She exhibited widely, including all the notable ‘hot’ galleries of the time in NYC (Elements gallery, Fairtree gallery, Aaron Faber gallery, Spring Street Enamels gallery, and others) as well as doing a line for Bonwit Tellers (a fashionable NY department store) for several years. She had a large following of collectors, and her work is owned by such diverse individuals as Queen Noor of Jordan to Brooke Shields. She was both a reviewer and columnist for Metalsmith magazine. Her own work was reviewed on numerous occasions in the New York Times. She was a founding member of Enamel Guild NorthEast, a juror of many art shows, and a donator of enameled jewelry for Channel 13’s fundraisers. Her work is also featured in many books, including Murray Bovin’s classic text, Jewelry Making. Her awards were numerous. But despite her busy life, she always found time to welcomed visiting enamelists to New York, and offer them a bed, if needed. 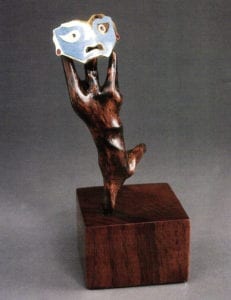 Antonia had a disdain for some of the pomposity of the art world. She often marvelled at the importance some people put on resumés, for example. They might be important, she admitted, if you wanted to teach art, or run a gallery, but when it came to making a masterpiece, they were completely irrelevant…great art is great art, no matter what one’s background! She also felt artists and craftsmen should help each other, that the world of creative people was special and interdisciplinary links should be formed. 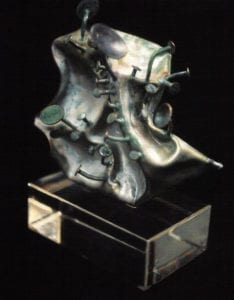 Antonia had four areas where she worked in her New York home. There was a table in her bedroom where most of the design ideas were generated. The pantry was used for etching, and for stoning pieces (as well as other messy work). The firing of pieces occurred in the kitchen! The kiln was rolled out of the pantry on a rolling cart and into the kitchen when needed, and stored back in the pantry when not in use. The actual studio was small and painted red. A glorious window looked out over the tops of NYC buildings (it was on the 11th floor), revealing clouds, rooftop gardens, carrier pigeons in flight in the day, and glittering lights of the city at night. She had no machines. In this simple setting, Antonia produced a large quantity of beautiful, museum quality work. 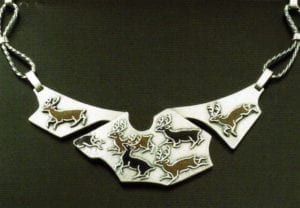 Antonia’s talent and skills were amazing despite never having had any formal art training. Before she learned enameling, her silver jewelry was striking and unusual. Later, she experimented with many different jewelry techniques, but always returned to her favorite-the combination of silver (and sometimes gold-plated copper) with enamel. She also made a number of non-jewelry pieces, ranging from small cloisonné tryptichs to experimental bowls and wall pieces and, ultimately unique sculpture. Originally, the sculpture was metal (usually copper) formed into a single form or multiple shapes and enameled. Later, she began to manipulate wood (often found pieces) and combine it with dazzling additions of enameled metal (often champlevé masks). Sometimes she would also combine clay with enameled components. 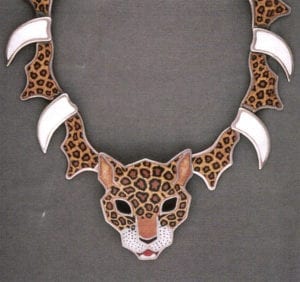 As a rule, Antonia worked on a small scale and believed in what she termed “portable art.” Animals, including insects, and nature were her primary sources of inspiration. She once said, “animals supply endless and dramatic possibilities for design; they can be used realistically, symbolically, or mystically. The latter, particularly, since they have such an ancient relationship with homo sapiens.” Although she did beautiful work in all the enameling disciplines, she preferred champlevé (“Anything you can draw, you can etch-there are no limitations”); she loved the juxtaposition of enamel with the etched metal lines. She liked using her hands as much as possible and steered clear of gadgetry and machinery (possibly the only artist to use a hand drill!). Every piece she made had a significance to it; she would not create something “just to sell it.” 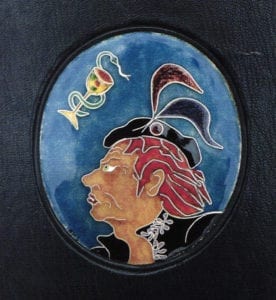 Amongst the creatures of the natural world that Antonia most enjoyed translating into enamel were insects and, on the other end of the scale, the big cats of the jungle, specifically the leopard! Insects had long fascinated her, since her childhood in Bermuda, and for a brief time, she considered the possibility of becoming an entomologist. She did not follow this career path, but did keep a huge collection of books about insects (from biological to the fantastic) in her home. Perhaps her favorite insect was the praying mantis…this insect, in various forms, recurs in much of her work.

The leopard, on the other hand, was simply a creature that she loved…for its grace, its beauty…and she made this animal her ‘symbol.’ Although she created jewelry with tiger, panther and lion images, her leopard pendant (with matching earrings) was her trademark piece. Other animals that were frequently incorporated into her work were elephants, giraffes, frogs, snakes, antelopes, rabbits, owls, cranes, bees(!), and zebras. 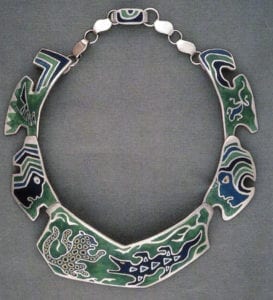 It also should be noted that in her later years, Antonia wrote and published a charming and well-received novel about an animal psychiatrist (Noah and Me), as well as award winning poetry. Many of her written themes echoed what she had expressed visually in her enamels. 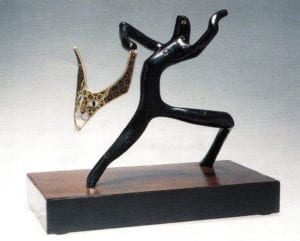 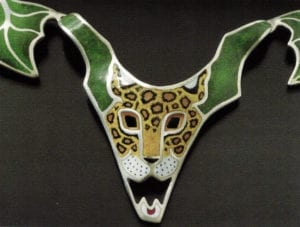