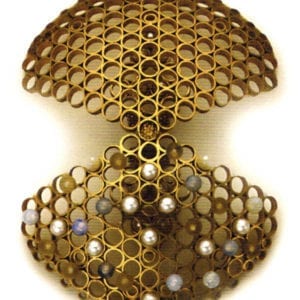 Barring punctuality, Germany and Japan don’t seem to have a lot of things in common culturally. Still, the ties that bind the two nations are a good relationship of many years. And they will be strengthened this year with the official “Germany in Japan” year. Germany will be putting on an abundance of cultural events and exhibiting economic and scientific projects in the Land of Rising Sun until 2006. 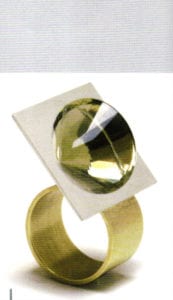 “Upon Reflection” ring by Herman Hermsen 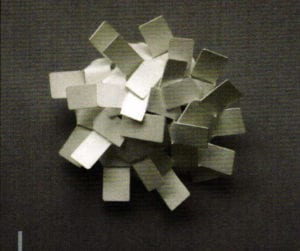 Amid the multitude of major exhibitions and projects, there is a little jewel that will be running in the Museum of Arts and Crafts in the city of Itami from August 31 to September 19, 2005. The exhibition is entitled “Choice – Contemporary Jewelry from Germany” and it showcases the work of 30 jewelry designers. Its basic principle holds the promise of a diverse range of jewelry. Ten reputable jewelry designers who were either born in Germany or have been living and working in Germany for years chose two other young designers each whose work will also go on the Journey. It is based upon an idea of Professors Elisabeth Holder and Herman Hermsen, both of whom teach in the Jewelry Design Department at the Dusseldorf University of Applied Sciences and who will also have their work exhibited there. The exhibition is dedicated to highlighting the pluralistic character of the jewelry scene here that is driven by a vibrant exchange of ideas on the international scene, a high density of jewelry schools and various design scenarios being juxtaposed on one another. 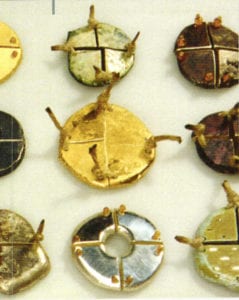 “Disc Rings” by Sam Tho Duong

Jewelry design is a craft that still has a rather brief heritage in Japan since it only began developing after the Second World War. Before then, swords, hair jewelry or magnificent clothing made of the finest materials had the social position that jewelry has. Some Japanese designers learned the art of goldsmithing in Europe, particularly in Germany. And still, there is little awareness of jewelry among broad sections of the modern population. Kazuko Nishibayashi, a jewelry designer based in Dusseldorf, contends that “German jewelry design is hardly noticed in Japan. Most Japanese are interested first and foremost in German classical music, secondly in German football, and only then in art. In general, contemporary jewelry is not very popular in Japan.” The “Choice” exhibition would like to change that situation and bring work made in Germany home to Japanese jewelry connoisseurs while throwing a spotlight on the wide range of potential ideas. 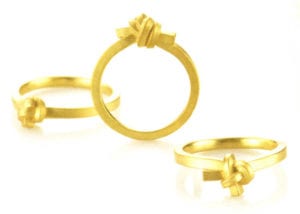 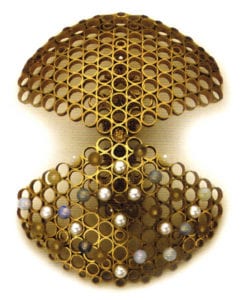 One of the best known Japanese designers living in Germany is Erico Nagai. She is a goldsmith who was born in Tokyo and who is also presenting some of her work at the “Choice” exhibition. She is the quintessential artistic link in jewelry between East and West. At 58, she has been based in Munich for 30 years and has been creating distinct jewelry by combing European goldsmith techniques with traditional Japanese ones, thus creating spectacular jewelry with an unmistakable style. She imaginatively combines precious with non-precious metals, combines the Japanese Nunome technique of coating gold with textile structures with European inlaying and intarsia techniques to create innovative surfaces. She put her head together with a Japanese master varnishing craftsperson to come up with a technique for applying varnish directly onto silver or gold. No matter what technique she applies, she always uses her jewelry objects to express the delicate balance between cultures. In retrospect, the artist declares “l wouldn’t have been honest, if I had just created ‘Japanese’ jewelry because I matured as a goldsmith in Germany”. 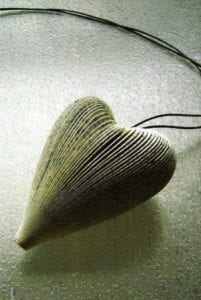 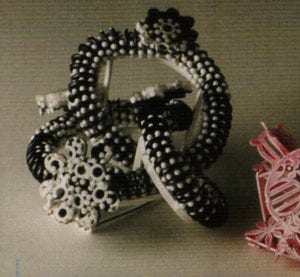 “Black and White” and “Pink” brooches by Helen Britton

Using the foreign to find your roots

Kazuko Nishibayashi’s work a so combines German and Japanese elements. “I unconsciously absorb German culture in my everyday life without necessarily going by it. What I have learned from Germany is the method: not as far as design is concerned, but the way of approaching a theme, thinking it through, researching it and trying out various processes.” Her Japanese heritage shines through in the way she paints with her brush in profound concentration and feeling. Nishibayashi thinks the fun she has playing with simple shapes and wrestling with the material is an expression of her home country. “I like paring away at the superfluous to contemplate something to recognize that things are still very lively”. 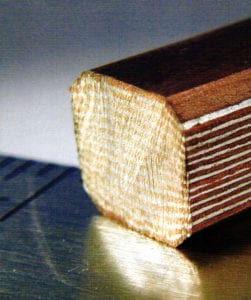 Mokume Gane bars by C. Hafner as the manufacturer of semi-finished products

The Japanese jewelry designer Michihiro Sato went to college in Pforzheim and also worked in Dusseldorf for a long time. These days, he is teaching in his home country Japan in the city of Itami and he is the one who set up connections between the local Museum of Arts and Crafts and the Dusseldorf University of Applied Sciences. He first became aware of his Asian roots by being in Germany. “The German constructivist design method put its stamp on my work from the onset, but then I wanted my Japanese identity to come through. If I had only lived in Japan, I probably wouldn’t have gone in search of my roots”. 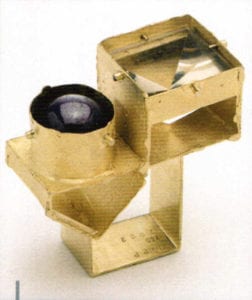 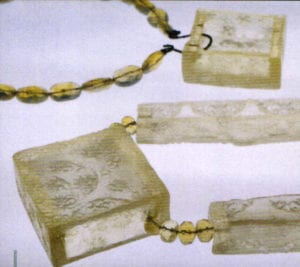 The narrative of a technique: Mokume Gane

But, the cultural impact can also go in the reverse direction. A case in point is a traditional Japanese technique that German goldsmiths also make use of. The Mokume Gane technique is enjoying a constantly growing number of enthusiasts Mokume (woodgrain) Gane (metal) is a metal working technique developed in the 17th century in Japan to create grips for Samurai swords with flawless craftspersonship. Since Samurai swords indicated the social status of the Samurai carrying them, they were produced with great skill and at major expense. The special layering and bonding of precious and non-precious metals create surface structures that call moving water or woodgrains to mind. The Pforzheim-based C. Hafner Refining Establishment has included semi-finished Mokume Gane products in its range as a way of reacting to the burgeoning interest in this technique. The German jewelry designer Ute Tobisch has also signed up to Mokume Gane and already won competitions with her work. The Frankfurt am Main-based designer enthuses: “l have been working with the Mokume Gane technique for 10 years and I have learned to love it, although it takes a lot of effort to work it. What I find fascinating about it is the way that you can combine a wealth of colored metals and the patterns you can create with them”. 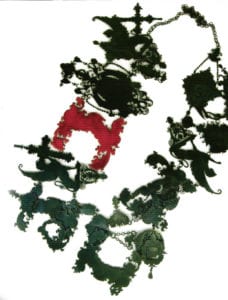 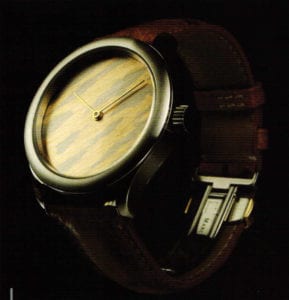 A watch face by Ute Tobisch in the Mokume Gane technique

Exhibitions such as “Choice” do their bit to apply cultural differences to the process of artistic inspiration. Kazuko Nishibayashi sees a major opportunity for the young generation of Japanese goldsmiths to create something new. “Before, relatively many jewelry designers in Japan were locked into a material mindset. But, at the present, a large number of up-and-coming artists are working in concepts, giving them more freedom in terms of their choice of materials. The young jewelry designers want to push back the limits of the crafts industry while getting a more profound concept of Japanese culture to develop their own aesthetics. I’m sure they’re going to strike a new path”. 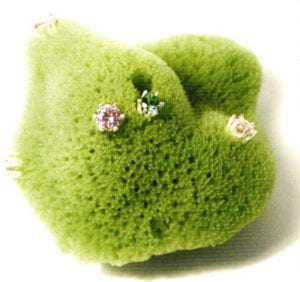 In contrast, Erico Nagai is more skeptical about the Japanese jewelry producer’s scene because “a lot of borders have been blurred with this stepped-up cultural exchange. In the past, a lot of people frequently didn’t really view trends from Europe and America with the eye of a critical designer. Now, Japanese designers have to find their way back to their own mode of expression”. In any event, jewelry design all around the world is an exhilarating experiment with the language they develop and the valuable experience of the international exchange of ideas.

All articles by this author
Previous Fascinating Caprioles of Nature Gemstones with Inclusions
Next Wolf-Peter Schwarz: When It’s Night in Helsinski
Social media