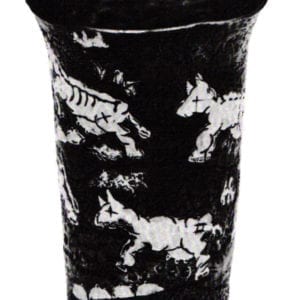 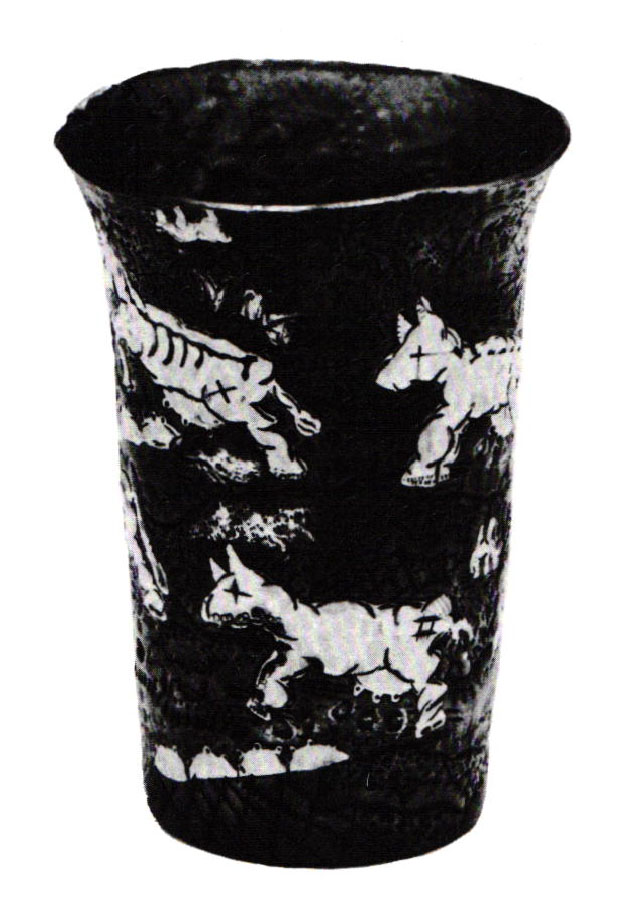 These are pseudo-traditional metal objects. One is a flask, others are boxes; there are a couple of spoons, some cups and diminutive vases. Yet in discussing the works, we can set aside these seemingly defining descriptions, returning to them only near the end of the discussion, as an added dimension to Norrell’s work. For it is the pictorial image more than form, more than material, more than surface, more than use, that motivates and animates these artworks as a distinctive and unusual expression.

Norrell has always drawn. She took high school art classes and her artwork at the University of Georgia started in drawing and painting. But she always liked working small—shy and self-conscious, she worked small so that nobody could see what she was doing while she was working on it—so she responded readily to the intimacy of jewelry scale and was soon engrossed in Gary Noffke’s metals classes. 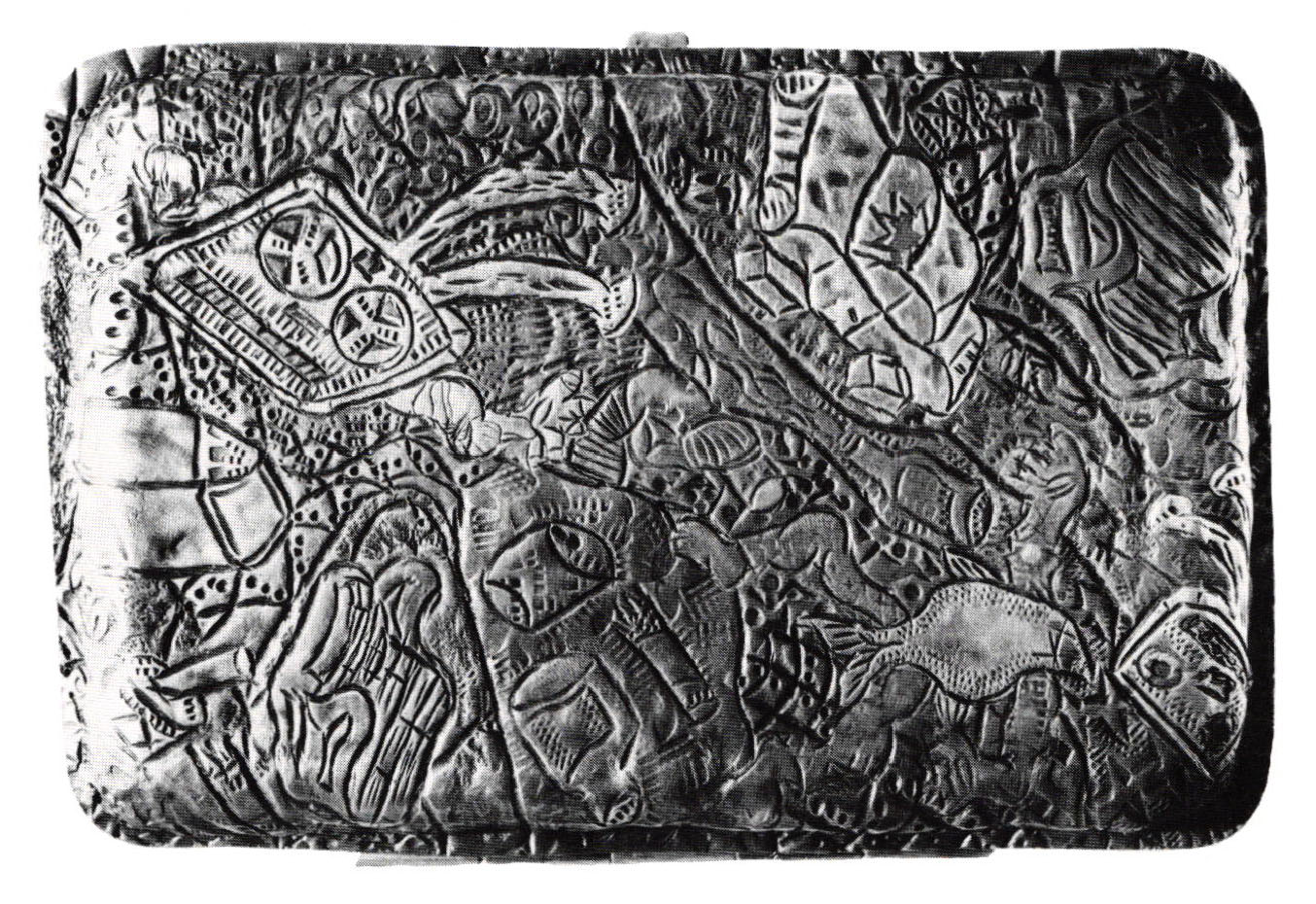 She found her present style during her second year of graduate school at Virginia Commonwealth University. She combined the drawing and the enameling she had used as an undergraduate, with jewelry scale, resulting in pins decorated with colored scenes. She started by laying transparent enamel over texture, but she wasn’t happy with the way the enamel flattened the surface. She tried limiting the areas of color and eventually began to use various metals for color effect, such as gold, bronze and (most often) copper on silver, contrasted with dark, oxidized areas. She made the shift into holloware to give herself a slightly larger scale than the jewelry permitted. She continues to raise and chase to achieve shape and texture.

Norrell is now in her third subject matter series. The first was farm animals, the second focused on eating and drinking, and the present series has to do with social commitment, with specific images inspired by items in the newspaper. All the pieces share an interest in texture, a basically representational approach without much attention to detail or precision, an unconcern with orderly relationships (e.g., the conventional stabilizing effect of gravity), stacking of representations and distention of space, a compulsion to fill up every available space and a subtle, quirky sense of humor. 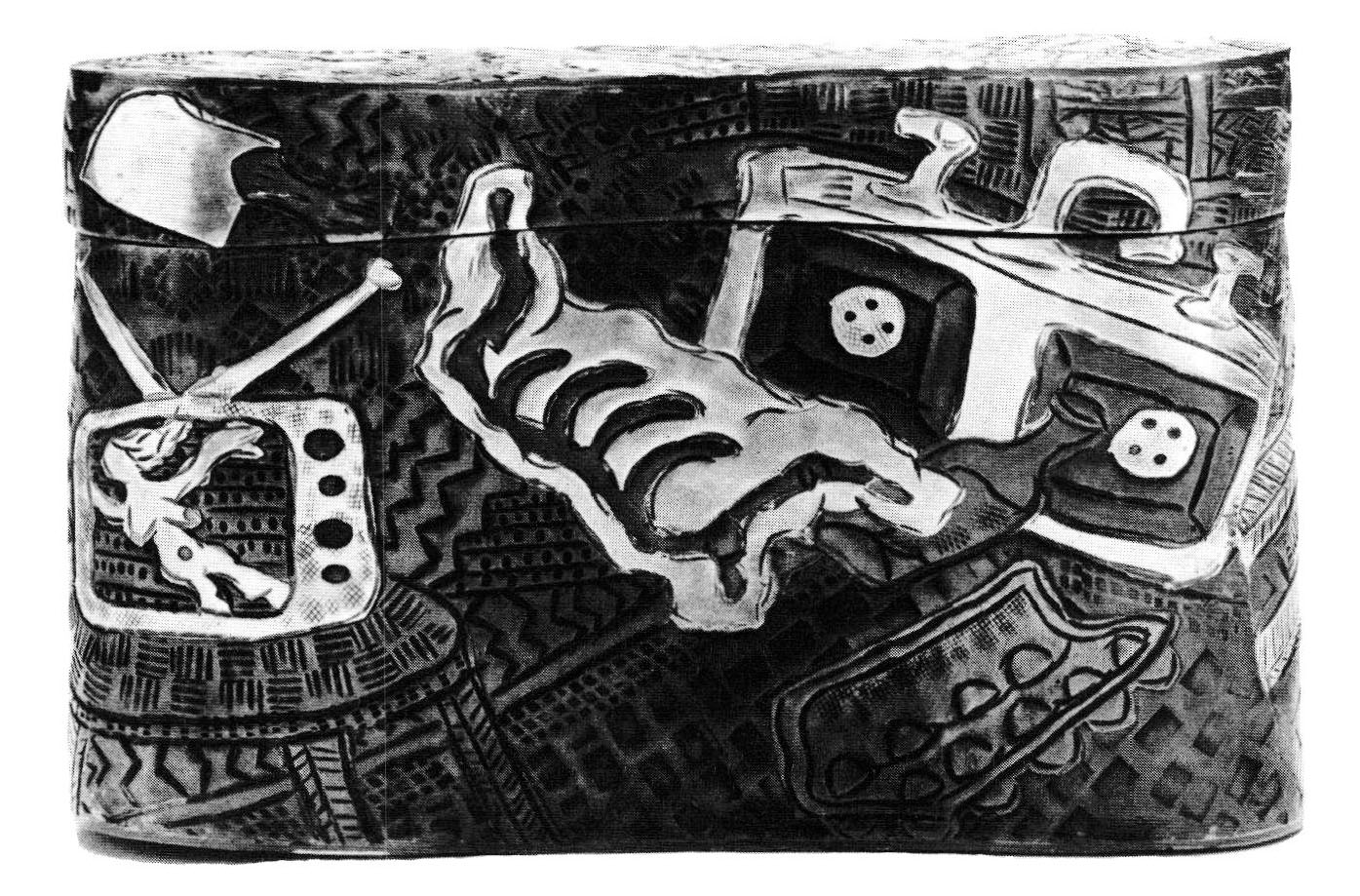 Consider a few examples. Both the Cow Cup and the Cow Fertility Cup are deeply textured with copper planished into the silver surface after soldering. Both depict cows in various positions, rightside up and upside down and often splayed, with dotted lines of butchering diagrams. The cups are crisscrossed with the textured images of roads and rocks and grass and even piles of—what! udders? Norrell laughs, shrugs and says they’re just another pattern.

The Meat Box is a transition into the eating and drinking theme. The cows appear again, but this time they have been processed into sides of beef, with ghostly ribcage patterns, and they float through a kitchen along with a plucked fryer, an open carton of eggs and a rabbit-eared television set. The Dining Table Bot seems to lead into new territory. The subject table has splayed legs and a potato-shaped top. On the reverse of the box, floating upside down, are two large nude figures engaged in animated conversation. They bob above an armchair; a fish swims beside them, a duck walks on the floor below them. What does it mean? 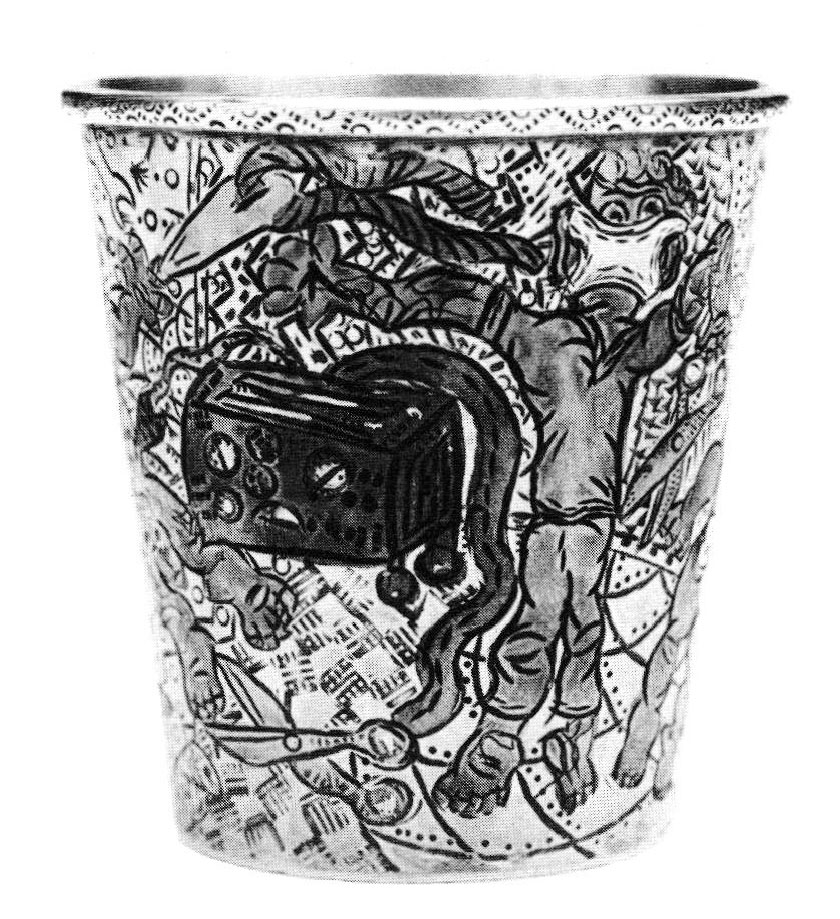 It at least means that Norrell’s cryptic subject matter is evolving again. The use of televisions seems symbolic; in Dogs and N the strange, disorderly dogs (some with udders, some with pig snouts) cavort before television sets which show nude women, fish or jagged lines—pretty rudimentary content. Evolution is populated by creatures with fish bodies but arms and legs, who jive through today’s toxic primeval ooze carrying enormous “ghetto blasters,” high-stepping over cigarette butts and past cars on blocks with shot-out windows. It’s a lethal vision. And speaking of lethal, a new piece, in progress, shows an operating room with probes and scissors and fish, and a man on the operating table with a visible digestive tract, a lady with a visible reproductive tract and a doctor with bare feet and a mask that covers his whole face. It is not designed to inspire trust in the medical profession.

These are dream snatches, fragmentary images and surrealistic pairings, such as an electric plug with a fork on the end (why not, Norrell asks; we have electric toothbrushes). Above all they are disorderly, bereft of spatial specificity. Norrell thinks of the images as just oozing out or growing in an organic way. There are centers of interest but no formal organization and no structuring plan. She wants them to be ambiguous because she denies having “any specific set of answers” anyway. The images are not meant to be moralizing, but they are meant to be questioning or commenting on life. 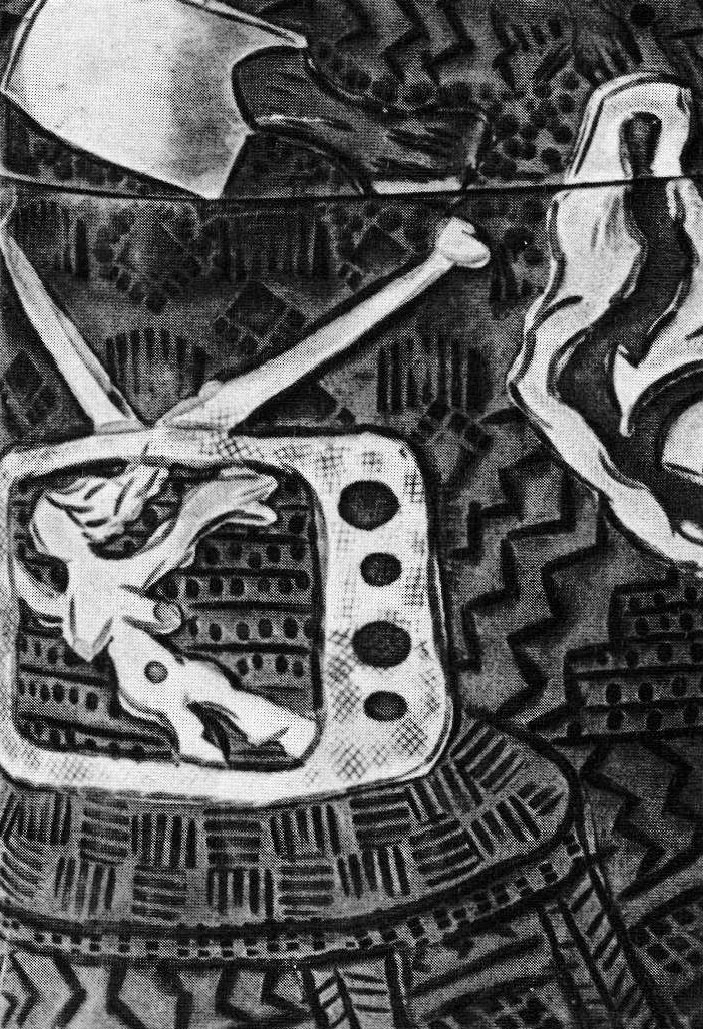 And it’s here that we return to the issue of function, for Norrell prefers that her works be usable. She has used her cow and goose spoons, and there is no reason that the boxes and flasks would not function. She is more comfortable with the offhandedness, the low regard that people give to functional objects. The functional form of the pieces, the fact that they are curving flasks and cylindrical cups, also amplifies the spatial confusion of her work. There is no starting place, little sense of front or back, just a spatial and contextual continuum that one must push into and try to make sense of—just like life. Metal techniques also make a specific contribution to the character of her work. The process of forming distorts and individualizes the already loosely structured scenes and deforms the images further. That’s fine with Norrell. She likes the paradox of precise metals techniques resulting in a primitive, chaotic image.

There is a consistency to Norrell’s work and a coherence to her ideas that indicates that the provocative complexity of these objects is not a lucky accident. She is a young woman, only a few years out of graduate school, working in relative isolation in a small town near Athens, Georgia, fitting her own work into the evenings and weekends after her day work at an Athens jewelry shop. It’s not an easy situation for making art. But Norrell seems to be onto something; she has a distinctive style that opens up exciting avenues of expression for the metalsmith, and she’s leading the way with these unorthodox, messy, disorienting, agitating, but ultimately rewarding objects.