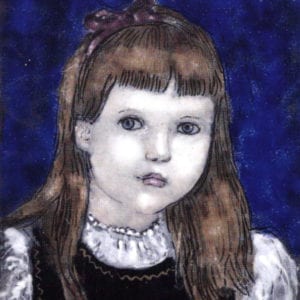 For some artists, acclaim only arrives after their lives have ended. But Lisel Salzer – a native of Austria who fled the Nazis and settled in Seattle – was one of the lucky ones: She was rediscovered at the age of 96 and honored with a museum exhibition in her native country. Then, two years ago, the Austrian government presented Ms. Salzer with the prestigious “Cross of Merit in Gold” for her lifetime devotion and contribution to the arts. 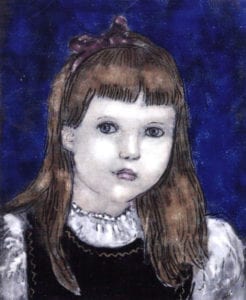 Ms. Salzer died Dec. 6, 2005, at her home in Seattle’s Mount Baker neighborhood, some nine months short of her 100th birthday. Ms. Salzer and her husband Dr. Frederick Grossman moved to Seattle from New York in 1950.

Ms. Salzer worked as a portrait artist and enamelist, showing for a time at the Otto Seligman Gallery. Among her subjects were artists James Washington Jr., George Tsutakawa and Alfredo Arreguin. During the 1970s and ’80s, the Frye Art Museum mounted several solo exhibitions of her painting and enamels. 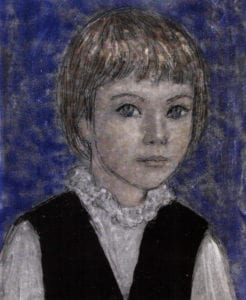 Grossman died in 1957, and Ms. Salzer, whose parents died at the Theresiendstadt concentration camp, never remarried. Ms. Salzer had no children: Her friends and former art students became her surrogate family.

As a young woman, Ms. Salzer led a privileged life. After she finished art school, her parents sent her on a three-month painting holiday in Paris, and at 23 she set up her own studio in Vienna, not far from her parents’ home. 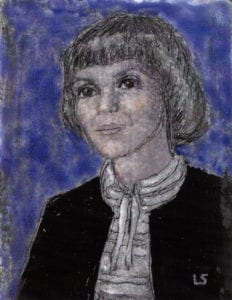 Her paintings were accepted in the region’s top juried exhibition and she was invited to show at the Wüthle Gallery, which also represented Gustav Klimt and Egon Schiele.

Ms. Salzer spent summers with her parents near Salzburg, along the shore of the Wolfgangsee. There she joined an artist colony at the village of Zinkenbach that included her former instructor Ferdinand Kitt and another painter she admired, Josef Dobrowsky. 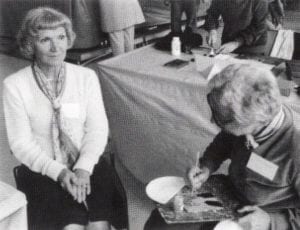 “This group were the most famous painters in Austria from 1925 until 1938,” Austrian art historian Christina Steinmetzer told The Times in 2002. Steinmetzer’s research on the group had led her to Seattle and Ms. Salzer, then the only surviving member of the colony.

Steinmetzer and several other historians founded a museum to pay homage to that special group, dispersed by the Nazis. Some, like Ms. Salzer, were Jewish. Others were considered dangerous simply because they were artists and worked together. “I call them ‘the lost generation’ because most of them had to emigrate,” Steinmetzer said. 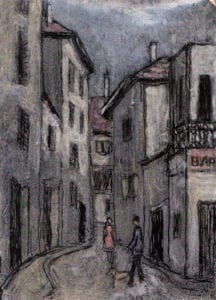 In Seattle, Ms. Salzer was very involved with the Democratic Party. “Politics is what kept her alive the last few years,” said writer Barbara Sleeper, who assisted Ms. Salzer with her autobiography. “She was hoping to stay alive to see Bush go out of office.”

With her vision greatly diminished, Ms. Salzer had struggled as an artist during her final years. “She was depressed, because it’s a horrible thing for a visual artist to not be able to see,” said friend Lenore Kobayashi. 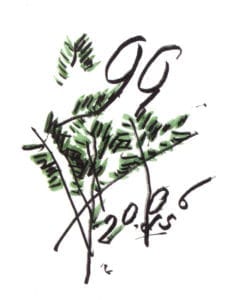 But even with her eyesight fading, Ms. Salzer continued to draw and delighted in sending little cartoons to friends and acquaintances. A number of her cartoons are still being published in the Canadian magazine Walrus.

A private memorial will be held. In lieu of flowers, please volunteer or send contributions to the Community Services for the Blind or Partially Sighted, 9709 Third Ave. NE, No. 100, Seattle, WA 98115-2027.

Note: In 1951, “Enameling Principles & Practice” by Kenneth Bates was published. On page 186 was an enameled portrait by Lisel Salzer. To me, it seemed the ultimate in enameling. In 1982, I was delighted to meet her at an enamel symposium in Seattle. There, I was able to watch her paint an enamel portrait of a live model.. Actually, the live model was Irmgard, my wife. She started with a copper panel which had a coat of fired black enamel, and a dry bisque coat of liquid 831. It required about one hour and thirty minutes, including three firings. The August 1986 issue of Glass on Metal was a special edition about Lisel and her enamels. We exchanged cards at Christmas time for 23 years. The hand made card for this year arrived fourteen days after her death.

By Woodrow Carpenter [Volume 25, Number 1, December, 2006]
In association with