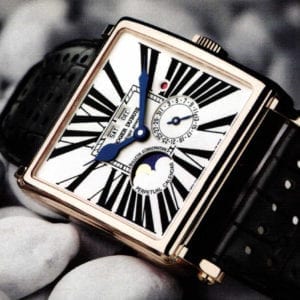 Watches are normally round or angular, usually with an analogue and sometimes an additional digital display. In the past decades, particular noticeable cycles in watch design occurred repeatedly. At the start of the twentieth century watches were mainly rounded in design with three hands and an analogue display. The twenties heralded a shift towards rectangular watches only to see round watches become more popular again during the Second World War. This style was favored until the seventies when rectangular watches made a comeback due to the new quartz watch technology which was coupled with the digital display. The nineties were characterized by an increasing interest in watches with mechanical movements. Initially their design was rather classical, yet since 1998 this has become ever more progressive. Many models are now characterized by variations in form, dial or color. It is also interesting to note the sudden emergence of new combinations of technology and design such as a digital display generated by a mechanical movement, or that small clockworks are once again being built into pieces of jewelry. It is becoming very evident that the last five years or so have given birth to a new diversity in watch design. 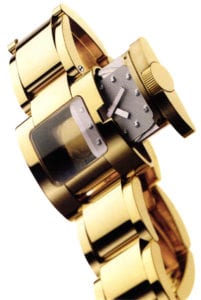 Style at its purest: designed by Felix and Thomas Baumgartner together with Martin Frei, this model is manufactured by a patented encapsulation process during which the movement is “pushed” sideways into the casing The fine guilloched, solid silver rectangular shaped dial contains 12 diamond indeces. www.goldpfeil-geneve.com 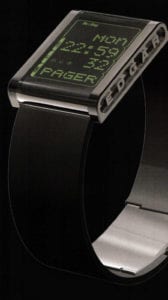 A case module specially developed for the collection carries an individual “message” in the perimeter area, such as a name or a signet. With this first watch, Mocca Design has developed an exceptional state of the art product. www.moccadesign.de

Ganoksin is sponsored by
www.moccadesign.de 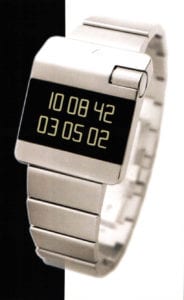 This is a remarkable digital watch for discerning tastes which catches ones eye not just with its avantgarde design but also by virtue of its readability and array of functions. The time is displayed on the upper dial line whilst various additional functions appear on the lower line. The patented Ventura “EasySkroll” system enables the functions to be rolled over by a register on the right hand side of the casing which are activated by lateral pressure. www.ventura.ch 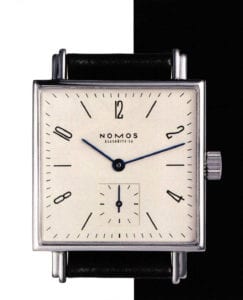 Nomos regards itself quite rightly as a trend resistant brand. Elegant, confidently stylish and timeless – Tetra is already a classic among angular watches. www.glashuette.com 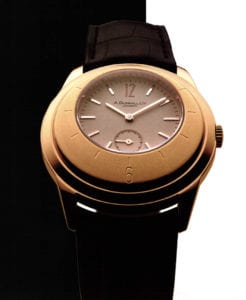 The unconventional character of the Dunhill X-Centric reaches beyond the limits of traditional watch design criteria. The unique array of eccentric circles is an expression of individuality and distinctive character. The symbol of Dunhill X-Centric, and the reason why it is so remarkable, is the positioning of the dial, and with it the situation of the movement above the center of the watch as well the crown. The exceptional engraving on the back plate which frames the mechanical movement adds the perfect finishing touch to a truly unique watch design. www.dunhill.com

Ganoksin is sponsored by
www.dunhill.com 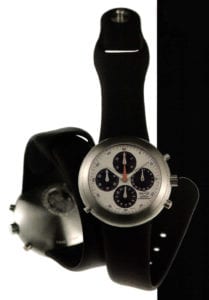 The Hemipode-Chronographs, which carry a COSC (Swiss Official Chronometer Control) certificate and are waterproof to 50m, are equipped with a Kaliber Valloux 7750. The date is displayed by a counter at the 3 o’clock position. A second time zone at the 6 o’clock position is adjusted by a corrector button on the left hand side of the casing. The stainless steel case has a PVD coating. Each dial version is produced as a limited series, 9999 pieces of the steel version, 999 pieces in gold and 23 pieces in platinum. Ikepod watches are now amongst the most sought after designer watches in the world www.ikepod.com 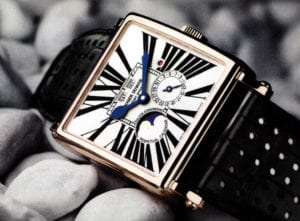 The Roger Dubuis factory, founded by Carlos Dras und Roger Dubuis in 1995, has been developing exceptional watches for many years In order to safeguard the exclusivity of the brand, production is limited to just 28 individually numbered pieces. Each watch continues to meet the requirements of the Geneva Sea and is delivered with this official certification. Due to the design, the ivory colored dial of the Golden Square is heavily influenced by the painted Roman numerals. A further feature of this watch is the eternal calendar and its display window. www.roger-dubuis.com 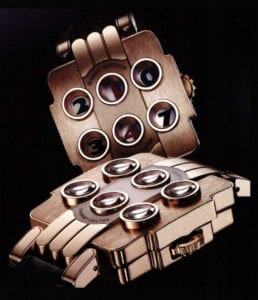 Ten closely arranged display dials are the characteristic of Opus 3 by Harry Winston. The design of this striking watch is dominated by the mechanics which display the time in a digital, yet somewhat unusual manner. The movement of Opus 3 consists of more than 250 individual parts, 98% of which are manufactured by Vianney Halter himself, the designer and watchmaker of Opus 3. The uniqueness of this watch is characterized by the fact that the numbers of the digital display are actually separated from each other. They are read in two rows, each from the “magnification windows”. The hours appear in the two outer openings in the middle. Before each change of hour or minute a countdown of the last four seconds appears in the upper date window. www.opus3.ch

Ganoksin is sponsored by
www.opus3.ch 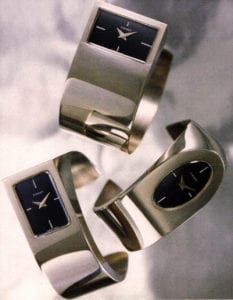 The Finnish Collection by Tissot, launched in 1973, is one of the classics in the field of watch design. Created as a fashion jewelry watch, it embodies in a classic-modern manner the notion of reduced design. The blue dial interacts handsomely with the light-colored case. www.tissot.ch 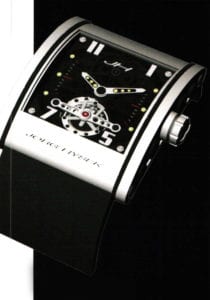 This new model by Jorg Hysek is technically and aesthetically successful right down to the last detail. Not only has the designer trimmed the curved case to its purest form, he has also made the whole movement – bridges, wheelwork and tourbillon cage – into a trendy high tech unit. The tinted sapphire glass dial has an opening above the rotary unit which gives visual access to the centerpiece of this creation. A Limited edition of 10 pieces per year are produced. www.jorghysek.com 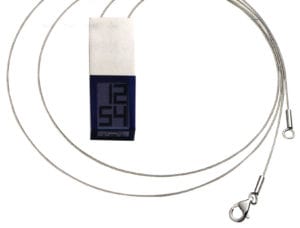 The sapphire colored pendant watch featuring a plastic dial by Fossil’s Philippe Starck, is an unusual product. Surprising, provocative and aesthetic. The pendant is available with a sapphire, ruby, or emerald colored dial. The design features a distinctive digital display, an aspect common to all watches in Philippe Starck’s Fossil collection. Additional functions include a date display, water resistance to 30 meters and a time display in 12- and 24-hour format. www.fossil.com

Ganoksin is sponsored by
www.fossil.com 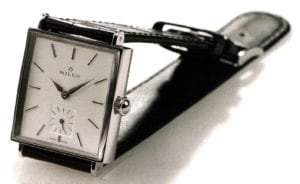 The Aurigos adopts the square shape as its basic element and interprets it in Milu’s own language. The finest alligator leather strap gives the watch its special touch. The case is characterized by a very attractive back which affords a view into the inner workings of the watch. www.milus.com