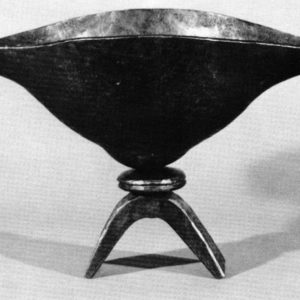 The Life Works of Carl Jennings

This past fall, the National Ornamental Metal Museum in Memphis, Tennessee mounted a retrospective exhibition of the work of master metalsmith C. Carl Jennings. A graduate of the California School of Arts and Crafts in 1934, Jennings worked in a number of shops before opening his own, El Diablo Forge, in Lafayette, California.

Historian F. Jack Hurley traces here Jennings’s 62 years of work in wrought iron, from such commissions as signs for the Christian Brothers Winery and light fixtures for the Church of the 49ers to tool making, vessels and one-of-a-kind masks.

Carl Jennings turned 80 this year. His body is not as straight as it once was, but his eyes are clear, his hands are strong and his voice is articulate. From his forge in Sonoma, California, he continues to turn out work that is original and distinctively his own.

At a recent “Repair Days” event at the National Ornamental Metal Museum, Carl was the honored craftsman. At the same time, his work was featured in a solo exhibit at the museum. For two days in October, he gave generous chunks of time and experience to the younger journeymen who had come to help the museum raise money, while undertaking several repairs himself. He also gave a gallery talk at the opening of his show. For all who were able to be a part of the weekend, it was a time for learning and admiring. 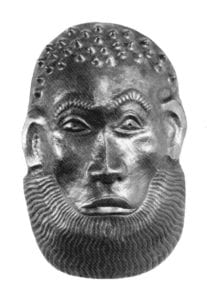 Carl’s father and grandfather were both blacksmiths. Cut from the sturdy Midwestern stock that typified blue-collar workers at the turn of the century, his father worked as a smith at various coal mines in and around the area of West Frankfurt, Illinois. When Carl’s mother died he moved the family west in search of better work and a change of scenery. There followed several years of wandering. His father could always find a job since he was a first-class smith, but there was never sufficient incentive to stay.

Somehow, Carl finished high school while also spending more and more time with his father in whatever shop happened to be his current workplace. Carl admired his father’s practical knowledge of iron and learned a great deal from him. “Hardly a day passes since being in business,” he observes, “when I don’t think, ‘Gosh, I wish I’d asked Dad how to do this. He forgot more about straight blacksmithing than I’ll ever know.'”

In 1928 the Jennings landed in San Francisco and put down roots. Carl’s father got a job in the shops of Pacific Gas and Electric and, on May 20, carl also went to work there, as an assistant to his dad. It was a good experience, but in 1931, Carl was laid off. The depression was deepening and PG&E couldn’t use him anymore. A few months of job seeking convinced Carl that it was time to do what he really wanted to do, go to art school. “I had always had a yen to do creative work – I was always drawing,” he recalls. The San Francisco School of Arts and Crafts was accepting applications for the summer session and Carl signed up. 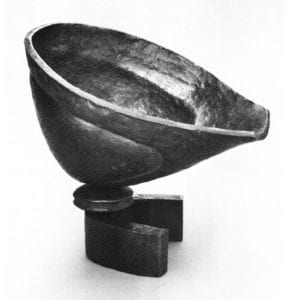 “Going to art school was the turning point in my life – from a creative standpoint,” Carl acknowledges. Although the school taught only coppersmithing and silversmithing, school director Hugo Meyer did not discourage Carl from doing blacksmithing. There was a small rivet forge out behind one of the buildings, along with a small anvil. Carl made tools for the coppersmithing shop and learned some of the basic techniques of repoussé and vessel-making that would come into play again many years later. More important were the classes in design where Carl sharpened his eye and developed his taste. He worked as janitor in order to pay his way through school. It was at school that Carl met Elizabeth Gallagan, who became his wife in 1935, a hard year to be establishing a family.

For the next 15 years, Carl worked in various shops in the San Francisco Bay area. A son was born in 1939, and Carl’s responsibilities increased. In 1946, Carl made the leap and went into business for himself. He bought property in Lafayette, California and established El Diablo Forge. This continued to be his place of business until his semi-retirement to Sonoma in 1971 . Carl specialized in lighting fixtures, fire screens and fire tools. He found it difficult and inefficient to work with assistants and so most of his output was relatively light. He did occasional larger gates and railings on demand, hiring help when necessary.

The work turned out from El Diablo Forge and the Sonoma workshop might well be called California Gothic. There is a strong Spanish influence, along with a massive, almost brutal quality. Antonio Gaudi is cited as the major influence in Jennings’ artistic life. Carl knows Gaudi’s life and work well and has made two trips to Barcelona to see the famous unfinished Sagrada Familia cathedral and other Gaudi works.

Carl is struck by Gaudi’s knowledge of iron (the Spanish architect served a two-year apprenticeship as a blacksmith and actually made some of the ironwork on his earliest buildings) and his ability to integrate a number of different materials into a coherent whole. “He was a hundred years ahead of his time. His ironwork was just so far advanced. He really influenced me.” 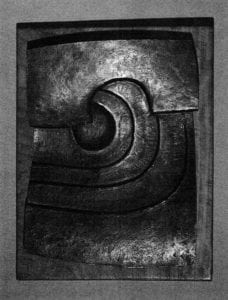 Carl has worked hard through a long and productive life. He did everything from fine art to lawnmower repairs in order to keep the bills paid, while his son grew up to become an engineer. In 1971, the property at El Diablo Forge was sold and the Jennings went into semiretirement in Sonoma. Carl did an occasional large commission, but mostly made small pieces for sale through a gallery in San Francisco. Now there was time to experiment, and Carl returned to some of the ideas and methods that had attracted him back in art school. A series of masks and heads has been an ongoing interest. Using raising and repoussé techniques on hot steel, he has produced a number of primitive, yet very lively pieces.

As sometimes happens, the freedom to “play” that semiretirement allowed brought a level of recognition that Carl could never have attained in his day-to-day business. There were solo shows at the Richmond Art Center and the Annenberg Gallery, and his work was featured at the DeYoung Museum, The San Francisco Museum of Art and the Oakland Art Museum. Awards came his way. At heart, however, Carl has remained the quintessential smith, as willing to talk about tools and techniques as he is about esthetics.

A case in point is the matter of Carl’s vessels. For the last several years, Carl Jennings has become more and more identified with a series of raised vessels, often in heavy steel. The works have a massive quality that combines with a certain plasticity in a way that is both ambiguous and pleasing. Carl makes each vessel individually, using a powerful hydraulic press, a tool not usually found in the shop of artist-blacksmiths. I found myself wondering if the tool had suggested the objects or if the idea for heavy vessels had existed first and prompted a search for the tool. I asked him about this and his answer evolved into a treatise on the mind of a working artist: “‘Well, I wanted to get away from the linear aspects of the type of work that 99% of the blacksmiths in this country are doing out of bar stock. There’s nothing wrong with it, but I wanted to do something different. I had been introduced to vessels years ago in the copper shop and I had always wanted to go back to that sort of thing.” 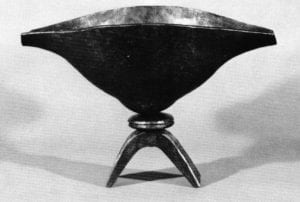 Carl clearly wanted to work out certain ideas in metal. He also knew instinctively that he wanted to work in a heavy material. “I always did like some mass,” he says. “It seems to give a quality I like, and I like the challenge.” The problem, then, was finding a way of realizing the idea in his mind. His 25-pound power hammer was inadequate for the job. Working half-inch steel by hand was even more out of the question. The hydraulic press, capable of generating nearly 75,000 pounds of pressure on a single stroke was the answer, especially when combined with special-purpose tools that Carl constructed. “I like to think I’m a pretty good toolmaker” he says. “I see the need for a tool and stop everything to make it. I couldn’t do that when I was in business full-time but now that I’m semiretired, it is one of the nice things. I can make whatever tool I need.”

What we have here is an important clue to the difference between an artist and a craftsman. A craftsman’s esthetic might well be driven by the tools available. A new tool might suggest new possibilities. For the artist, however, the idea is there first and the real question is how to realize it. This is the way Carl Jenning’s mind works. And now, late in his life, more and more people are starting to recognize that although he has lived a simple, relatively hard life, he has lived the life of an artist.

F. Jack Hurley is a professor of history at Memphis State University