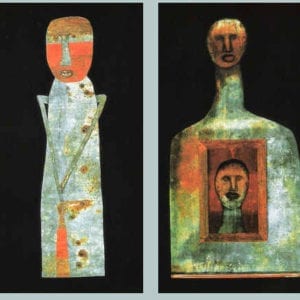 The Work of Judith Hoyt

For more than 20 years Judith Hoyt has parsed the human figure in metal and mixed media. Beginning with a salvaged scrap of metal, wood, a book, or other material with a history, she fashions solitary or paired figures, often with a surprised or pensive mien,

She is a metallist to the extent that fabricated metal forms provide a ghostly surface on which opaque paint is sparingly applied. The scale is intimate, even in the large wall pieces. Tightly clustered on the studio wall their dialogue buzzes with the silent hum of human voices. To share space with them is to hear their cacophony of silence.

Although academically trained with a BFA in Printmaking from SUNY New Paltz, Hoyt remains outside the “academy” in her worldview. Working intuitively, she identifies with visionary or so called Outsider artists and seems to embody Ken Johnson’s commentary on California assemblage artist George Herms: “[T]he central event around which each work revolve[s] is the quasi magical transformation of waste into art….The redemption of refuse through art may be read as a metaphor for accepting unlovely aspects of the self Hoyt’s work retains a craftsman’s “hand” and arefined intimacy often missing from conventional assemblage.

Like sculptors Alison Saar and the early Ellen Driscoll, Hoyt fastens metal directly onto a wooden substructure with tiny brads or metal rivets. Her recent jewelry is now as fully realized as her earlier wall mounted works. She exclusively makes brooches, so the body becomes both the backdrop and the partner the figure carries the figure, like the image born on the torso of Other Self. They’re like sketches or figure studies, not in the least perfunctory, but more like a snapshot than a studio portrait.

The human face has never been more expressive than in these archetypal forms with their somber mouths and prominent noses. They’re never cute or generic, frequently uncertain, always deeply human. The colors, too, are silenced, “lifeless colors, the color of ashes, [which] are used in religious habits to signify mortification, mourning, and humility.”‘ Some are toothless ghosts of indeterminate gender. Elongated necks raise heads above non existent bodies; squat necks disappear into hunched shoulders. Deformed but never repellent, these solitary creatures invite our empathy for the times when we too feel bewildered, unattractive, or alone. And though Hoyt has been working with the figures for decades they seem perfectly suited to a post 9/11 world.

Hoyt has succeeded in resolving the fundamental contradiction for women artists dealing with the figurethat of being both object and maker. Figure with Red Face and Woman with Blue Green Hat recall her series “Women in Housedresses” of a decade ago. Even the smallest brooch is imbued with authenticity and sympathy. Female bodies are never objectified. They live in an America without cable TV or cosmetic surgery. Some figures appear genderless, rather like the way our youth oriented society has unsexed the aged. Since they have no hair, they have no sexuality either, no power, no vital force. The absence of gender identity leaves us free to concentrate on the unifying and human emotions of isolation, abandonment, contemplation, confusion.

As a woman artist, Judith Hoyt has created women who are neither menacing nor nurturing, not sexually alluring, but merely solitary. She frequently chooses to represent androgyny, thus avoiding identifying traditional postures of masculinity or femininity. indeed, she has succeeded in “exposing the instability of gender itself as a continually shifting, fundamentally unstable scaffolding of socially articulated roles and visually and psychically determined identities.” She neither supports nor subverts the existing social order, but seems to inhabit some timeless place outside mainstream society, looking, instead, deeply inward.