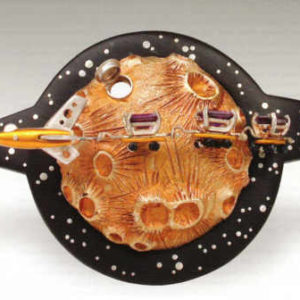 The Work of Mark Rooker

Missiles chase one another around Mark Rooker’s Circular Reasoning. Beneath the smoke plumes, lustrous silver water ripples on the bracelet’s surface and separates two island nations, each with a but and a nearby hatch that opens to launch another exchange of missiles. Rooker describes Circular Reasoning as “a diagram” of political madness. Tiny ladders lead us through the cross section, extending from the huts, down through the bracelet, to the system of loaded missile silos visible on the bracelet’s interior.

The bracelet is one of a series, “Short Stories,” in which Rooker exploits the surfaces of jewelry forms to create narrative. Played Out, inspired by sci-fi imagery of the 1930s and 1940s, spins another tale. We explore the minute spaceship and mining rig laden with gems The ship orbits a gleaming moon. We discover a portal on its pocked surface, peer in, and turn the piece over. On the back we see mining equipment extracting the moon’s last stones–”Chapter Two” of a story of luxury bought with resource-depletion.

In the spirit of sci-fi authors, Rooker uses fantasy worlds as a mirror in which we see ourselves-and our defects-more clearly. “Regular Programming’ offers disturbing reflections. Each of these seven brooches is a one-eyed robot. ‘They don’t need depth perception,” Rooker notes. “They just look at a TV screen ” Upgrade is corroded, absorbed in gluing a Mercedes-Benz hood ornament to its forehead. Overload glows in Ronald McDonald yellow and red, its arms laden with Cokes and cheeseburgers. Accessorized with products, these figures tell of desires programmed by mass media. The most compelling may be Fatal Error, glaring with a carnelian eye and adorned with guns ready for firing. When displayed (each brooch has an installation setting), this figure appears against a warning about the violent content of video games. Rocket’s virtuoso rendering of this riveted, mechanical being reminds us that the media engineers our emotional de-sensitization as well as our consumer impulses.

Rooker’s ironic wit takes a lighter tone in the “Flotsam and Jetsons” series, as Grand Theft, demonstrates. A rocket tows a 15-millimeter cubic zirconium. Rooker captures the mission as it is sabotaged by two flying saucers, one armed with scissors to snip the tow-line, the other with a catcher’s mitt to grab the loot.

Are the UFOs tiny, or is the cubic zirconium enormous, towed by a NASA-sized space vehicle? Rooker often plays games with ambiguous scale. Here he also uses the human body as an Otherworld setting with its own characters. The rockets are “big and stupid,” Rooker says; the flying saucers are smart, mobile, and saucy. They all occupy a universe with whimsically-conceived phenomenon. Why does a gem decide to pop from its setting? What black hole do lost buttons fall into? Why do threads come undone, splitting a garment like a planet fragmenting into asteroids? Of course it must be minuscule flying saucers that swoop in with mechanical arms to clip and snip or to loosen the connections in one’s eyeglasses with a tiny screwdriver.

These pieces turn life’s annoyances into “one liners,” as Rooker says. Many fantasists find playful dimensions in their imagined worlds; and they often use them for serio­comic effect. Petty Theft-a saucer prying a “gem” from a costume brooch-suggests the proliferation of “arms” that threatens the security of precious resources. Rooker seduces us with fantasy imagery. It takes a moment to realize that even his jewelry-jokes deliver social observation and cultural critique.

Tacey A. Rosolowski, a writer who currently resides in Washington, D.C., is the 2003 James Renwick Fellow in American Craft.

By Tacey A. Rosolowski [Metalsmith Magazine – Fall 2003]
In association with SNAG’s

Thought-provoking columns contributed by leading observers in the field on subjects such as fashion, education, and the status of craft.
Category:
About the author