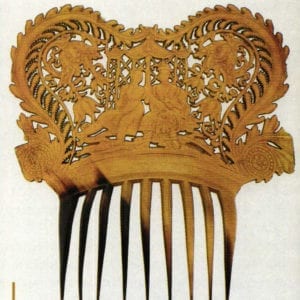 The magnificent hair of the Loreley on the Rhine is possibly the most famous in the world, often the subject of songs, as here in Mark Twain’s ‘An Ancient Legend of the Rhine’ from 1880. With a golden comb she brought her hair to a glossy sheen, beguiling the approaching sailors. 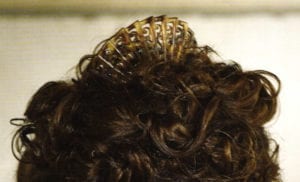 Excessively long hair has long been viewed as the highest expression of seductive femininity and individual hairstyles – together with jewelry – have been an expression of personality and social status since times long gone. In ancient Greece long hair was venerated as a gift of the Gods. As a symbol of dignity, freedom and vitality it was the preserve of the ruling classes. Throughout the ages, women’s hairstyles changed constantly, but until the revolutionary Eton crop established itself at the beginning of the last century it was long hair that was a sign of status and wealth. Locks were sculpted artistically, pinned up, tied, braided, held in place with elegant combs, decorated with strings of pearls or maintained in position with decorative pins and clips.

Grave excavations have also shown that, in 4000 BC, the Egyptians were already maintaining their hair with knives, hairpins and combs, as well as dyeing it and lightening it with fine gold dust. It was the Greeks that invented the curling tong, in the process further expanding the range of styles available. In the Middle Ages Roman women began to decorate their hair with silver, gold and ivory jewelry. Later, hair was concealed beneath a bonnet, although plaits remained visible, decorated with ribbons and golden thread. The Renaissance conjured gemstones, pearls and gold dust onto the head of wealthy women, before the Biedermeier era heralded a return to Roman and Greek hairstyles. This involved the increased use of ornamental combs, diadems, bonnets and decorative ribbons. An allegory for elaborately decorative hairstyles is the Austrian Empress Sissi. The portrait of her with tresses covered with a multitude of blossoms is world famous. It is said that she combed her hair for several hours each day in order to give it the satisfactory golden sheen that she desired. A life of headaches was said to be the price she paid. 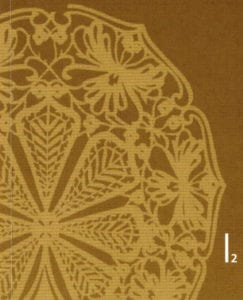 Historic Mantilla comb in the style of the Spanish Mantilla head covering, appr. 1910 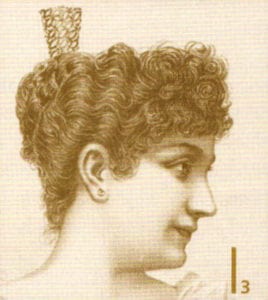 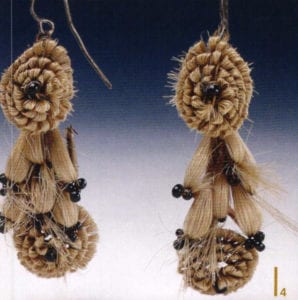 Hair was considered to be so precious that it was used as a material for jewelry: earrings made from human hair, 1st half of 19th century 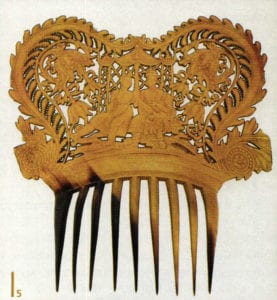 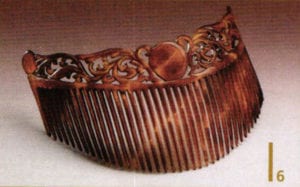 Ornamental comb made from horn, appr. 1880

Closely bound to the history of hair fashions is the profession of the combmaker. With this ancient profession it was possible to make a living both from the production of lice combs and the creation of artistically-decorative hair combs for the well-heeled. Today, this traditional craft has almost died out completely. For the “betters” of society combs and clips were produced using valuable tortoiseshell or ivory, and decorated with ornate carvings. All other combs were primarily made from easily-accessible cattle horn or wood. Around 1900 the first combs were made from celluloid, which could be colored extensively to imitate the preciouse tortoiseshell. The revolutionary ‘Eton crop’ of the 1920s drove combmakers worldwide to the brink of ruin, as short hair styles were now no longer taboo for women, rendering combs, clips and hair accessories practically superfluous. Many comb manufacturers began to produce household objects or buttons in order to secure their livelihoods. The Mumliswil comb museum in the Swiss region of Thal should be thanked for ensuring that the trade of the combmaker did not disappear completely: it displays an extensive range of exhibitions on the subject of the combmaker’s craft and is the only museum in the German-speaking area of Europe to deal exclusively with ornamental and hair combs. In June it will reopen again after conversion work – with a hair salon open daily! 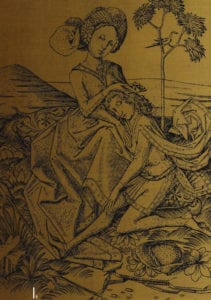 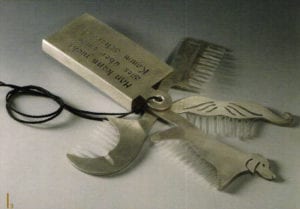 A comb for every occasion, Milena Linde, Berufskolleg Pforzheim 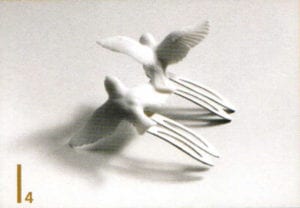 Ornamentation for every head: white porcelain doves from Lladro 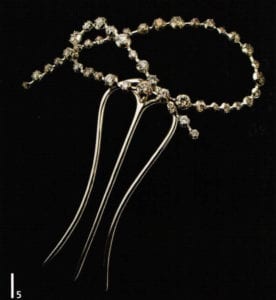 Gold and diamond studded comb from H. Stern, in cooperation with Frederic Fekkai 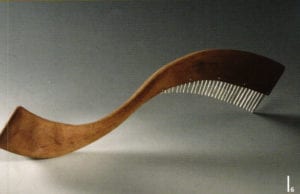 At the latest since the Beatles in the 1960s and the Punk movement of the 1970s, hairstyles can be chosen almost at will. Men and women wear their hair both long and short, there are artificial curls and hair extensions or straightened locks – with the consequence that the choice of hairstyling – again, similar to that of jewelry – is a conscious, personal decision, largely removed from the influence of social status. Today, artistically-decorative or particularly valuable hair ornamentation is somewhat of a niche product. The company Lladro offers romantically-ornate porcelain hair-pins, while designer Sabine Samuel favors clear designs in precious metal for her functional clips. In contrast, the work of the students of Berufskolleg Pforzheim vocational college are more experimental in nature. The current hair jewelry collection of the Brazilian jeweler H. Stern is especially sumptuous. Creative Director Roberto Stern collaborated with the star hair stylist Frederic Fekkai on the design of the diamond-studded golden combs and ribbons of the Zephyr collection.