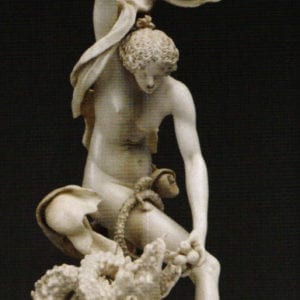 The Enigma of a Man Possessed

The unknown artist received this name as a result of the dramatic motifs that he interpreted into small, idiosyncratic sculptures around the year 1600. No other has carved this unusual subject in ivory with such virtuosity since. As a consequence, his works rapidly became sought-after-collectibles, pursued by renowned art collections. 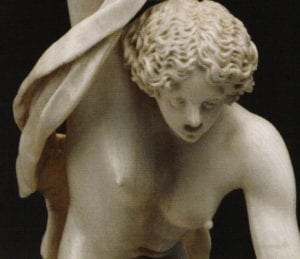 When the paintings and sculptures of Rudolph Kanns came up fro auction in Paris in 1907, the young American art dealer Joseph Duveen took out a loan of five million US dollars to acquire the entire collection. Duveen proved to have had a good eye for business. In 1939 he sold two unusual ivory statuettes from the collection. One of them embodied a fury, galloping, a cry on its lips, astride a white horse. The second statuette is a seated, naked man, unmistakably related to the fury. His mouth is opened wide in a cry of lament, the wide-spread arms seeking hold.

Both of these ivory works fascinate in the highest quality with their breach with convention. The question as to who created the hand-signed works has been posed time and again. However, it was not until much later that the art world came closer to identifying the creator of these incredibly beautiful, yet terrifying images. A number of years ago, with a reference to his major works, he was referred to in the Art History Museum Vienna by his name of convenience, “The Master of the Furies”. This is apt, as no other sculptural work covers depcitions of the furies, the Roman version of the Greek goddesses of revenge, the Erinyes, who emerged from the underworld to punish every transgression against the unwritten law.

What drove the Master of the Furies to address precisely this awkward topic so often? Was it an early Baroque fascination with horror that he depicted in his perfect ivory works? His most exciting piece is dedicated to the sacrificial death of the Roman warrior Marcus Curtius, who plunged to his doom on his horse in 362 BC to save Rome from destruction. The 46 cm high masterpiece comes from the Medici collection in Florence. A total of 25 works are attributed to the artist. The carver pushes the material to the limits. Wafer-thin leaves twist up like threatening flames, bent under the application of steam. The plinth that spirals upwards is a mosaic of ivory work, composed of 250 pieces and plates. The masterpiece represents the high point of the works discovered to date. Scarcely any other artist of that era managed to capture the mannerisms of extreme human feelings as adeptly.

It was not until 400 years after he created the works that an exhibition was dedicated to the artist, in the Liebighaus, Frankfurt. Despite intensive research conducted since the 1980s, riddles remain: what was the real name of the Master of the Furies, where and when was he born and where did he study and work. Who he was commissioned by and where he drew the inspiration for his mannerisms from remain unknown to this day. What is known is merely a series of inventory entries in the royal courts of Europe: Vienna, Prague, Salzburg and Florence. When did the works arrive in the possession of the Medici? It is assumed that the Master of the Furies was resident in Florence for a period of time and thereby became acquainted with the works of Giambologna. An indication of this can be found in the familiarity with the famous group “Rape of the Sabine Women”, which the Master of the Furies interpreted in his own, more autistic composition. On the shoulders of a man sits a woman, holding aloft a child. The principle of the “Figura Serpentinata”, that he was able to study from Giambologna’s work, is incorporated in the ivory statuette of the Hesperide, feeding the dragon Ladon with apples. 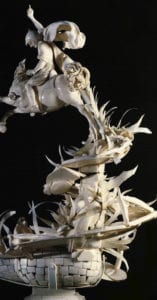 The bizarre art of the Master of the Furies found no successor, although, as the exhibition clearly shows, he maintained his own studio. He appears to have developed many of his themes from nothing. With his death they disappeared once again. His perfect carving technique was not to be challenged until the 1690s, with the arrival of the works of Matthias Steinl.

The highly eccentric, expressive element of his work can be found in the expressive forms of much later eras, such as Goya or Franz Zaver Messerschmidt, or many of the Brucke artists.

All articles by this author
Previous The PUK: Generation 3
Next The Women’s Golden Jewels
Social media