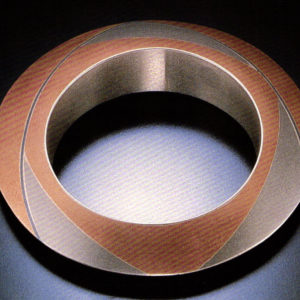 A Tribute to Tony

by Claire A. Dinsmore

Tony Papp and I met during our sophomore year at Parsons School of Design in September of 1982, which was the year that we began to work primarily in the discipline of our chosen major. Tony had taken an introductory class at Parsons with Deborah Aguado the previous summer and he had an immediate love of metals. He had also discovered that he had a seemingly innate facility with the medium and decided to return to Parsons for a B.F.A. in Jewelry/Metal Design.

My immediate reaction to Tony (and that of most of our classmates) was a combination of affection and envy. Tony was a lot of fun in the studio. He attempted to keep a certain level of humor (humor of perhaps questionable taste; however, pushing the buttons of staid and unquestioning morality was also a large part of what Tony was about) to balance the seriousness with which we had to approach our work technically. Aside from his playfulness, Tony had talent, especially technically, which astounded all of us, including our teacher, Hiroko Swornick. As any proficient metalsmith knows, working with metals is not easy; it requires great love and immense discipline. Tony had both. Many of us, when we discovered the intensity of dedication required to achieve any measure of success, seriously questioned our choice of metals. One of the extraordinary things about Tony was that for him there was never any question, he took to metals so naturally. From the very onset his dedication was immense.

Tony’s senior thesis in 1981 was a culmination of the vision of the Russian Constructivists who were, in essence, his “gods.” The majority of the work in his thesis show was a series of forms, both functional and nonfunctional – boxes, bud vases, small container forms and sculptural pieces – inspired by the work of Kasimir Malevich and Laszlo Moholy-Nagy. His favorite technique, and indeed his forte, was marriage of metals, an inlay that must be extremely precise. The simple, yet powerful graphic geometry of the Constructivists suited his use of this technique very well. Tony found beauty in their work that spoke of a certain peace and grace, a wholeness, a very human sense of order. There were no frenetic questions; their pieces “worked,” and so did Tony’s. His thesis presentation elicited awe; the sense of perfection and strength was immensely moving. 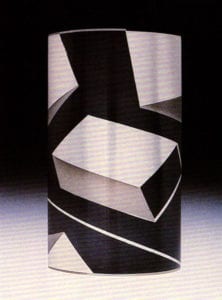 Music was also a great and deeply inspiring love of Tony’s: “My creative inspiration often comes from music, especially the sacred works of Bach. The undercurrent of emotions that I experience compels me to express the truth about my deepest feelings through a visual medium. As the structure of the movements becomes evident they evolve into my art forms. Listening to music allows the feeling to come through and I hope that I can communicate this to those that come into contact with my work.”

When Tony graduated he soon discovered that working towards his own ideals of beauty was not something that generally fared well in the commercial marketplace of jewelry. To remedy this situation he started a small business with his jewelry work in his apartment in order to support himself and the work he loved. He began a production line of pieces that were cast from originals he had constructed in metal, and he continued with somewhat less time-consuming marriage of metal pieces, which he produced as limited-edition pieces over the years. Marriage of metal remained his primary love and great strength and he became known for his prowess utilizing this technique.

After graduation, Tony and I remained friends and spent much time over coffee bemoaning the predicament of artists and the lack of support and faith we needed to pursue our work. In 1986, Tony moved into a studio at 430 West 14th Street so that he could do more extensive work and the larger pieces he longed to do, and he invited me to share the space with him. I was overjoyed at the idea but could not afford much rent. Tony believed in me and my work as no one ever has and said that I deserved a place in which to work, so he would give me the studio space for only a small portion of the rent. Tony made it possible for me to pursue my dreams and not compromise my work so that it would sell. His faith, his generosity, his support in every way had a beautiful energy. The passion and dedication he gave to believing in me touched my life with a warmth I will never forget; he always found a way to shrug off the doubts I had entertained over the years. His love and enthusiasm were always there to hold me up against all odds. 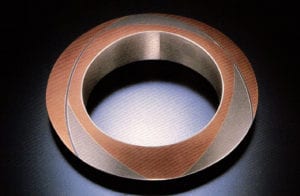 At this point he became interested in the work of the Cubists. He felt that by limiting themselves to the second dimension in most cases (except, of course, some of the constructions and sculptures of Picasso and Braque, etc.), the Cubists were often missing out on a potentially important element. They often communicated a vital energy of life in action that lurked behind visual surfaces and that he felt could take on an entire new dimension of life; it’s phenomenal and distinct energy, if translated into the third dimension. His one-of-a-kind work was his manifesto; bringing the passions he felt for living into the objects he created so that they would always retain a distinct preciousness and wonder.

Clair A. Dinsmore is a metalsmith living in Rocky Hill, NJ.

By Claire A. Dinsmore
Metalsmith Magazine – 1992 Winter
In association with SNAG‘s