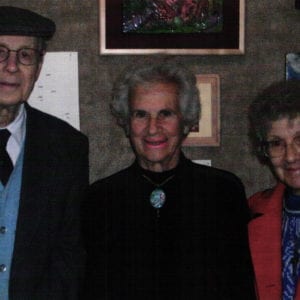 Vivian’s retrospective exhibition was a grand tribute to a fine lady who has been extremely busy during the past fifty years. For some thirty years, we have seen her work at exhibitions, galleries where she sold her work, and workshops, but we were not prepared to see an exhibition as large as many juried shows we have seen. Adding all she has sold over the years, and not in the exhibition, it is amazing one artist could produce so much without several assistants. And, to make it even more amazing, she has taken college graduate courses during this time, taught art and crafts, donated time to many organizations, authored a book, edited newsletters, had seventeen other ‘One Person Shows’, traveled extensively, raised a family, and still plays tennis at an advanced age. 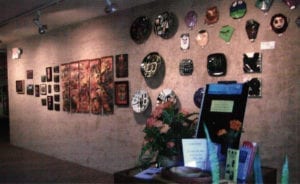 The exhibition area was sizeable, the enamels were well-lighted and hung in a pleasing manner. In a separate area, when a button was pushed, an automatic slide show gave you a short time to view each slide before bringing up another. Here, one could see some of the work she had sold and was not on exhibition. During the reception, another area offered delicious refreshments. The reception was well attended by art enthusiasts and friends from the University of Cincinnati, and the many organizations where Vivian is not only a member, but an active worker. 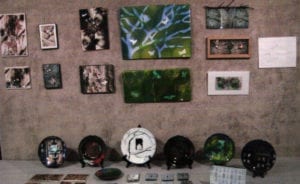 A group at the reception was discussing what the common theme was in Vivian’s art throughout the 50 years. The decision was ‘change’. One technique or theme was dominate for a period, only to be replaced by another. For instance, in the late eighties, she did cityscape sculpture. A section was cut from a deep bowl or vessel, the remainder was cut irregularly and enameled, as a multiple story with windows, with and without people in them, predominately in black and white. I have seen them on several occasions, but it was only at the exhibition that I noticed one, which at a distance, one window appeared to be cut out and a light placed behind it. Moving closer, the window was not cut out, it was a slightly yellow flux reflecting the room light. It certainly fooled me at a distance. There were some commercial enamel dinner plates which she had re-enameled in a very creative manner. Over the years, she has tried all of the techniques commonly used, as well as found objects. <div class="adframe"> <div class="adframe300x250"> <div class="adframe300x250label"> <i class="fa fa-gem icon"></i> Ganoksin is sponsored by</div> <center> <div id='div-gpt-ad-1479837244275-0' class="ad-item" style='height:250px;'> <script> googletag.cmd.push(function () { googletag.defineSlot('/87578358/ganoksin-paragraph-1', [ 300, 250 ], 'div-gpt-ad-1479837244275-0').setTargeting("topicid", ['exhibition', 'jewelry-design']).addService(googletag.pubads()); googletag.pubads().setCentering(true); googletag.pubads().enableSingleRequest(); googletag.enableServices(); googletag.display('div-gpt-ad-1479837244275-0'); }); </script> </div> </center> </div> </div> 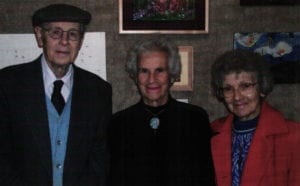 By Woodrow Carpenter [Volume 24, Number 1, February, 2005]
In association with