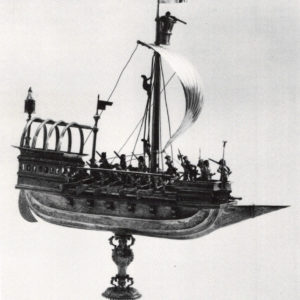 Learning about the style, fabrication and historical context of significant old pieces and the lives and working habits of their makers adds a lot to my enjoyment of my own work and permits me to feel that I am linked up to an unbroken chain of craft workers stretching back to preliterate times.

This past winter, the Decorative Arts Association of the Cooper-Hewitt Museum served up a good helping of historical pleasure when it presented the symposium “Virtuoso,” to coincide with the last day of the museum’s sumptuous exhibition: “The Art of the European Goldsmith: Silver From the Schroder Collection.” A generous contribution from Johnson-Matthey, Inc. made it possible to bring together a group of star-class scholars, who, with the help of many slides, did a wide-ranging show-and-tell on the idea of virtuosity in goldsmithing. 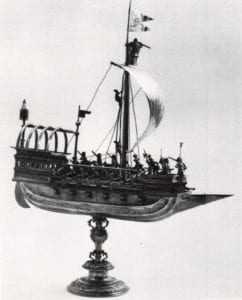 The program was nicely balanced, with Shirley Bury and Graham Hughes covering the territory from the 16th century to today, giving an overview of major artists, pieces and styles. Greater attention to two well-known masters; Paul De Lamerie and Fabergé provided more detail. Then the thrill of discovery of the life and output of (to me) an unknown goldsmith, Reinhold Vasters, rounded out the series.

It was a full day, with more facts and images flying at us than is possible to report on with any kind of completeness. Mention of some aspects of the symposium that interested me may help to convey the flavor of the event.

The word virtuoso has enjoyed considerable upgrading and changes in meaning over the last 300 years. It used to refer to the connoisseur of a particular art rather than the practitioner thereof, and it was tinged with the quality of dilettantism.

The depth of scholarship displayed by the lecturers was impressive. At times a single piece was minutely dissected in terms of style, ornamentation, maker, materials, construction, succession of owners, reasons for its existence, historical events occurring during its travels and dates, dates, dates. I suppose this is what it takes to be an art historian and though I respect and appreciate it I don’t think I could put together the tenacity it takes to track down every detail about a piece. Fortunately, the experts were blessed with a good sense of humor and a sensitivity for the make-up of the audience, so the presentations were liberally laced with fascinating tidbits.

I was interested in knowing something about the attendees so I counted the house (about 80 or more) and approached people randomly, asking about their reasons for being there. There were art historians, appraisers, decorative arts students, collectors, dealers, curators from other museums, interested citizens, art brokers and metalsmiths. It was a treat to see members of the Society of North American Goldsmiths present: Sam Beizer, Kurt Matzdorf and Alvin Pine.

After hearing the legendary name of Paul De Lamerie for years, seeing his work in books and at The Metropolitan Museum of Art, my interest in knowing more about him was satisfied by Anthony Phillips. Phillips made the point that De Lamerie, famous as he was, was one of many craftsmen whose lives as people are practically unknown.

The history of goldsmithing is not all saw, hammer, file and solder. Yvonne Hackenbroch told the fascinating and poignant story of Reinhold Vasters, a 19th-century virtuoso goldsmith whose name was new to me. Poor Vasters became involved with an unscrupulous dealer, and, as a result, may have missed out on the recognition he apparently deserved. The speaker also conveyed the excitement of art historical detective work with her exploration of the history of the Rospigliosi cup, which I remember seeing and admiring for years in The Metropolitan Museum, attributed possibly to Cellini. The last time I looked for it, it was gone. Was it banished to the basement because it really was the work of Reinhold Vasters?

Even if he doesn’t exist, we tend to invent and cherish the image of the solitary genius, like Edison, and forget that one person’s fame often rests on the contributions of a forgotten team. Margaret Kelly added this dimension in her discussion of the work of Fabergé.

Whether by intent or tradition, the British seem to have the right idea, Many of the modern English virtuoso objects described by Graham Hughes were commissioned as presentation pieces or gifts, The commissions come from all social strata: royalty, aristocrats, municipal governments. livery companies, universities, religious institutions, sporting organizations, labor unions and corporations. How would this translate into American life? Yes, I can picture the United Auto Workers commissioning a silver trophy for the winner of the Indy 500. And then the organizers of that race reciprocate with a sterling robot for the treasure collection of the U.A.W.

The symposium put us in the right mood to tour the exhibition of the Schroder collection of European goldsmiths’ work. Those tankards, cups, chalices, nefs, salvers, spoons, reliquaries, bowls and chargers were both inspiring and intimidating.

I left the museum wondering what the art historians will be saying about our generation of metalsmiths at a symposium like this 300 years from now. Make it easy for them. Preserve your pictures and documents.

The exhibition “The Art of the European Goldsmith: Silver From the Schroder Collection,” organized by the American Federation of Arts will be traveling for the next two years as follows:

Check with the museum before you go to see the exhibition as these dates are subject to change. A 208-page catalog is also available, including 250 black-and-white and 19 color illustrations, with text by Timothy B. Schroder, Director of the Silver Department, Christie’s, London and the late Dr. J. F. Hayward, formerly Assistant Director of Sotheby’s, London. The catalog can be obtained from any of the participating museums or by sending $12 plus $1 postage and handling to: The American Federation of Arts, 41 East 65th Street, New York, NY 10021.