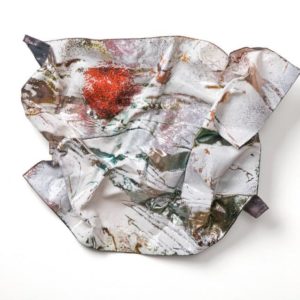 The Enamelware of Ben Caldwell 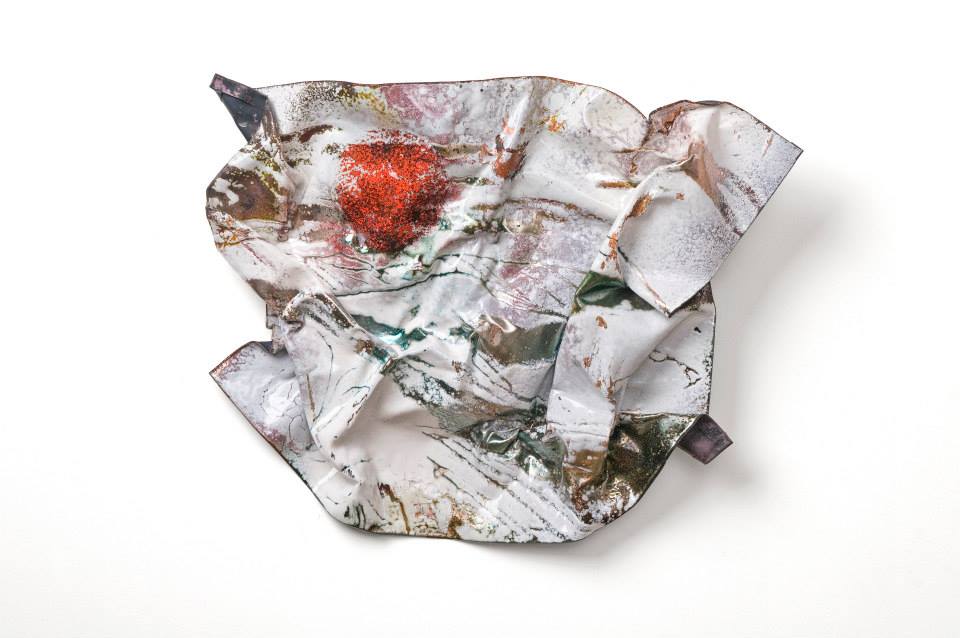 “Tower 49 always runs exhibits and supports accomplished artists, but Ben’s work, the medium he is using, the way he expresses himself, is different from anything else we have ever done,” said Michael Kline, Vice President of Kato International. “Caldwell’s innovations in copper-smithing and enameling will take people by surprise.” 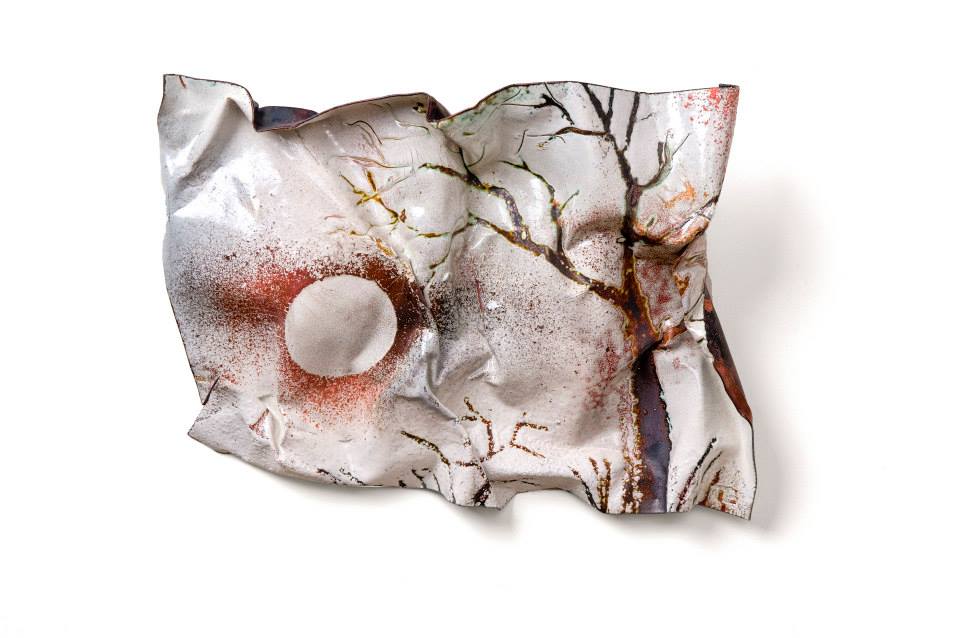 Ben Caldwell is a painter, copper and silver smith, musical instrument builder, and inventor. He trained at the Studio School of New York under Charles Cajori, an abstract expressionist who exhibited with William de Kooning in the 1960s. He received his BFA from Tufts University and The School of the Museum of Fine Arts, Boston, and a diploma from Roberto Venn School of Lutherie. A seasoned artist, he brings his multifaceted background to bear in a unified way as he pushes his boundaries once again. 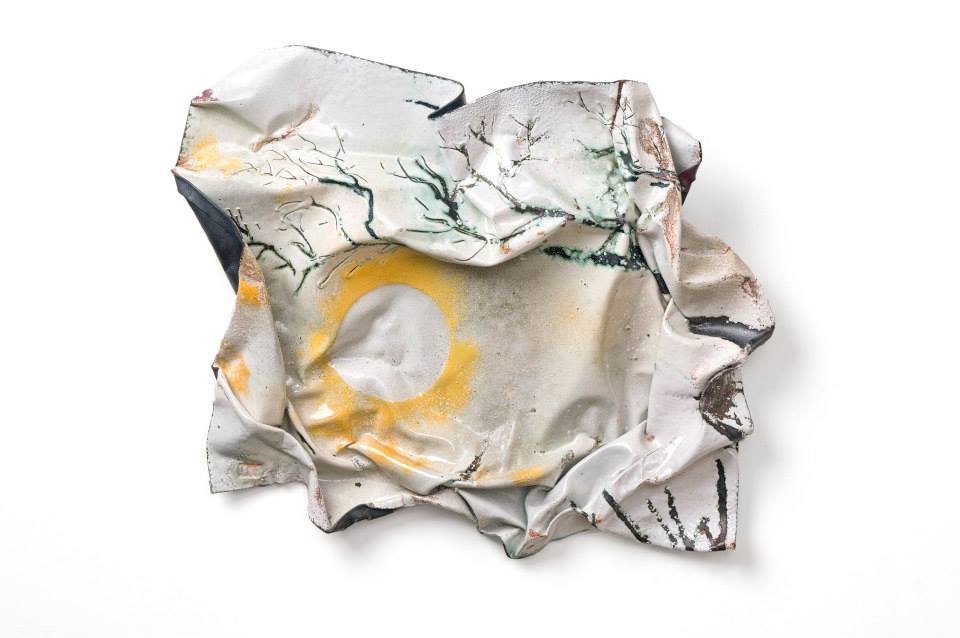 Caldwell thinks of the copper as a living canvass. “If you could have your canvas physically react to paint as you apply color, you might understand what I feel as I fire glass onto my ‘canvas’ of copper.” 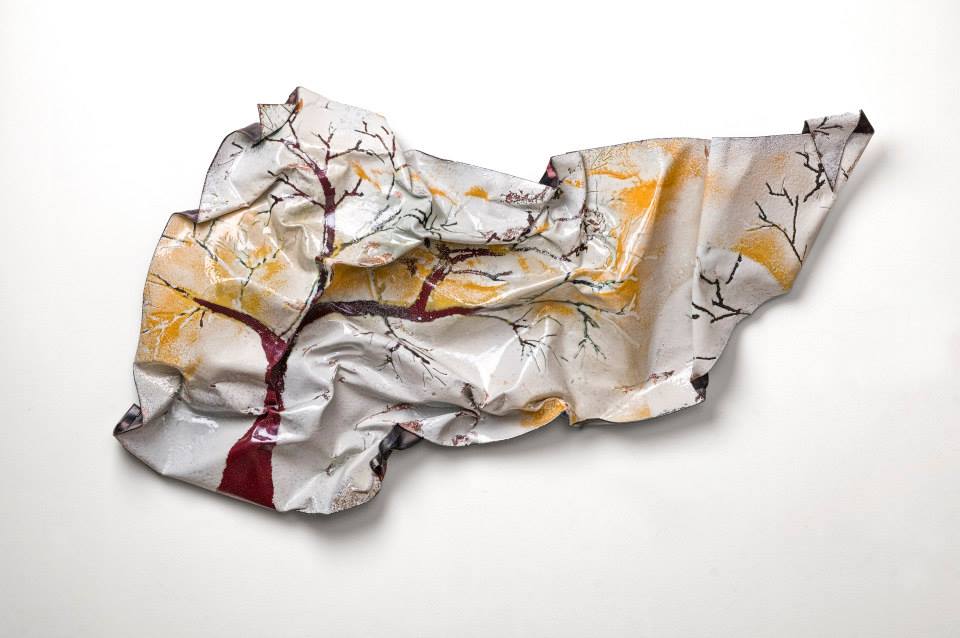 Caldwell melds a variety of experiences into his work. His approach to landscape painting is similar to the ancient Chinese tradition, where an artist walks and experiences the landscape over a lifetime, using that imprint intuitively to paint from memory. “In 1988, I walked the Appalachian Trail, and ever since I have been a landscape artist.” 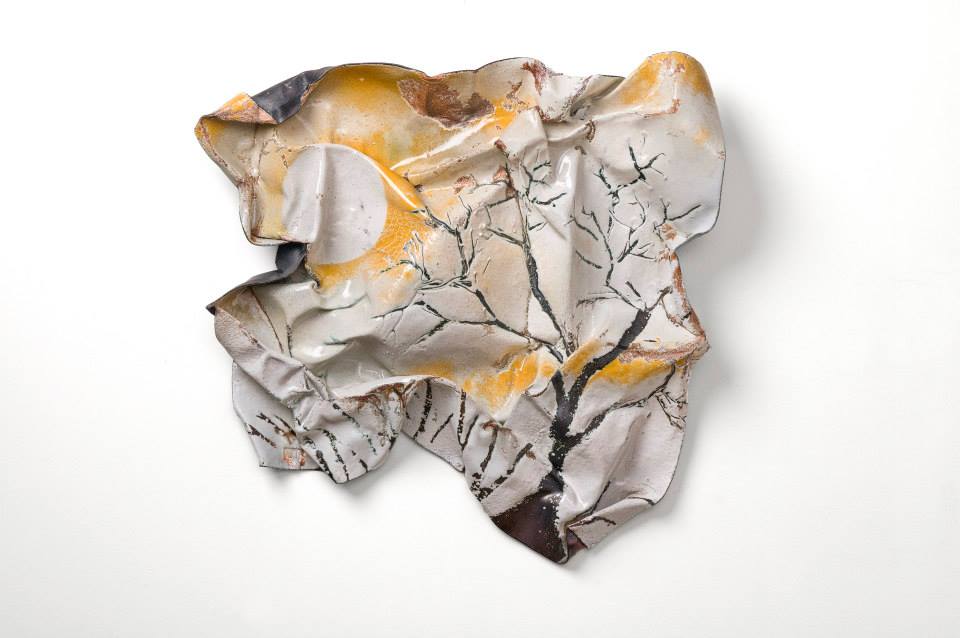 From his instrument making experience, Caldwell learned to invent his own tools and achieve his own results, rather than letting the tools dictate the outcome. Caldwell has now blown the doors off the traditions of cloisonne and Canton enameling, each precise, intricate and controlled arts. With the same training and employing the same materials, Caldwell instead works with door-sized copper sheets, pounds of colored, powdered glass and copper oxides, open flame torches, all of which he uses to paint as he sculpts and reshapes his canvas of copper. 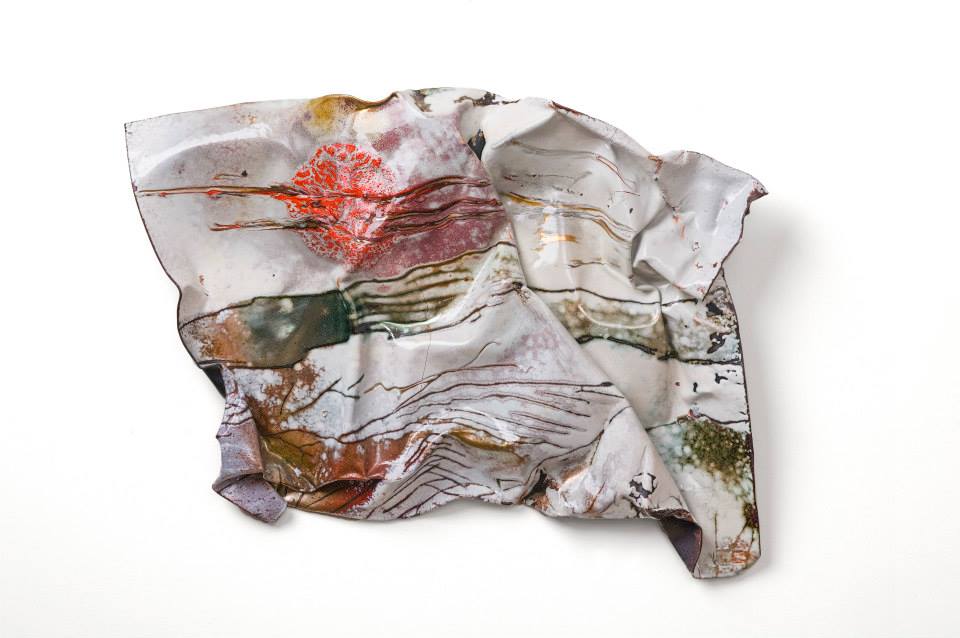 Growing up, Caldwell was influenced by his father’s collection of old English and early American silver. From this experience, Caldwell learned to understand the beauty and endurance of superior metals. Later, he witnessed a tornado-tortured church spire in Clarksville, Tennessee, which demonstrated to him how copper, under tremendous force, can produce some very elegant shapes. 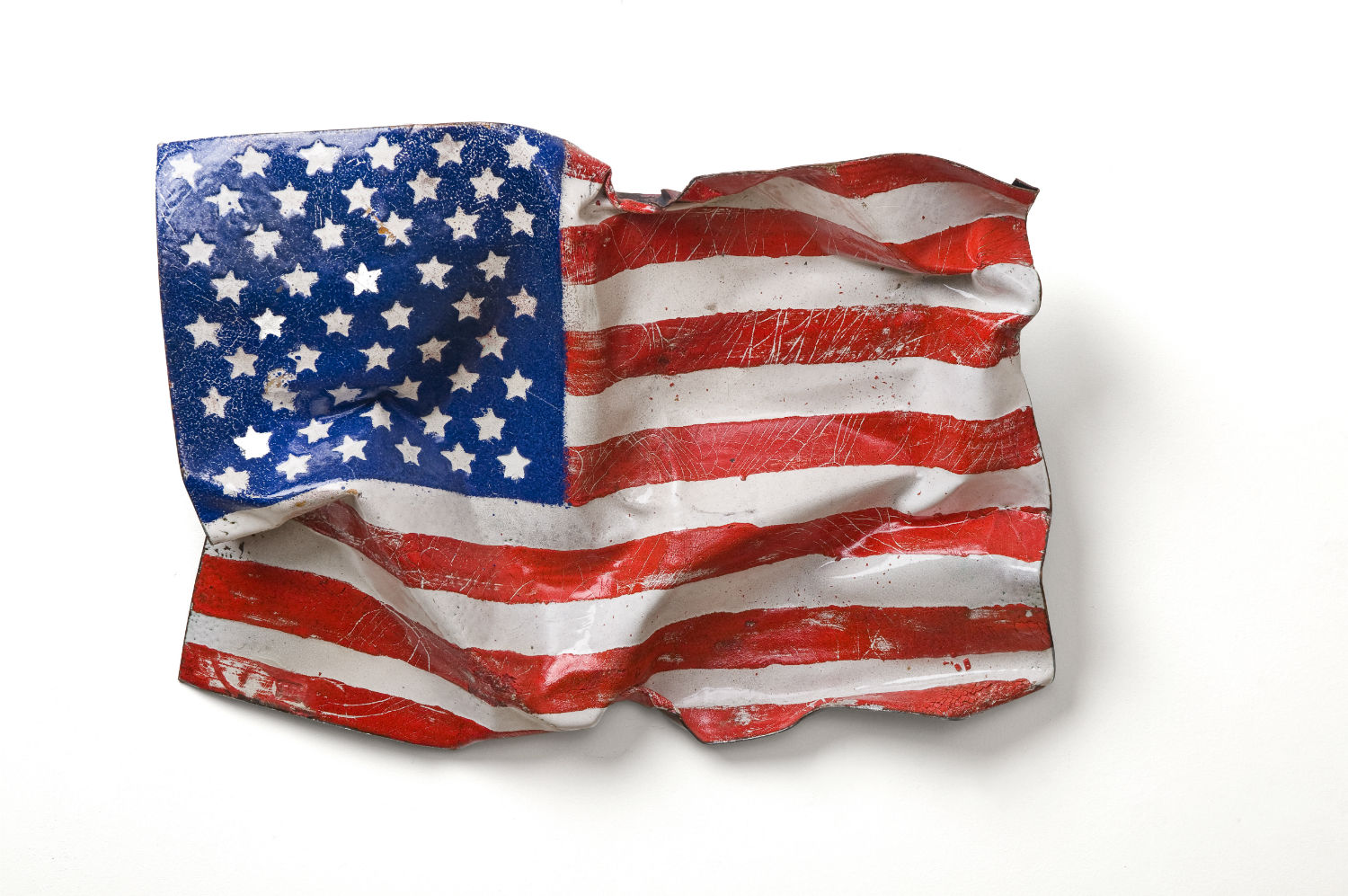 “I like the way copper folds, a lot like how mountains were created from two opposing forces, two plates pushing against each other. The actual surface of my paintings is similar to a landscape as well.” 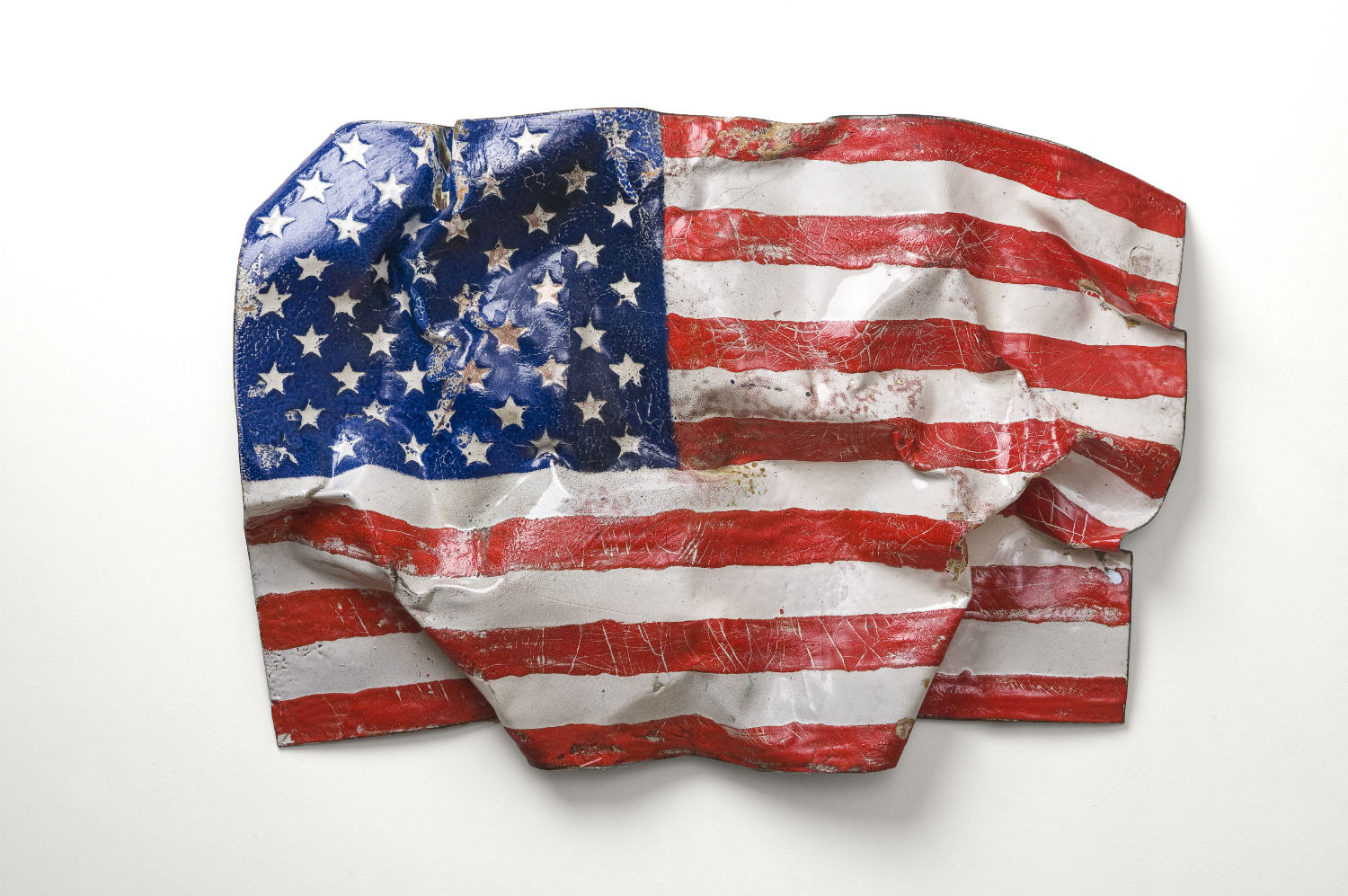 Caldwell constantly shifts between the visual painting and the sculpting, the surface and the overall shape. “When I begin to sculpt, I begin to destroy the image. It becomes different, and I try to bring parts of it back and then destroy it again.” As he hammers and crushes and unfolds and reshapes and burns colors onto his paintings, he points out, “Not that your intent is to destroy, but you’ve got to be willing to destroy what you love about a piece if it benefits the whole; you’ve got to let it go. Picasso said, ‘Painting is a series of destructions.’ That’s a modern way of looking at painting.”

Ganoksin is sponsored by
By Glass On Metal – Vol 27. Nov 2
In association

All articles by this author
Next Full eBook: Practical Jewelry Rendering
Social media