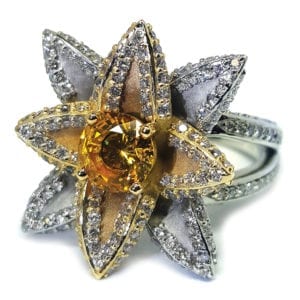 You never know how visiting the doctor could change your life. While Tony Snodgrass of Kent Jewelry in Rolla ,Missouri, waited with his pregnant wife to be seen by their doctor, he was flipping through Missouri Conservationist magazine and stumbled onto a photo of some lotus flowers. He couldn’t get the image out of his head and knew that he had to incorporate the flowers into a piece he was creating for an upcoming competition.

Believing the design he had in mind would work best as a ring, he started creating the piece in CAD. Since he planned on entering it into the competition, he wanted not only to create something special and spectacular, but also to demonstrate the range of his skills. He mostly works on custom jewelry, so designing this ring was a rare treat. 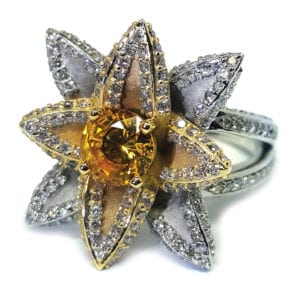 He designed the ring in white and yellow gold because
the pairing offers not only contrast,
but also the grandness the occasion required.

For a majestic feel, he conceived the two-tone ring with 244 white and 4 yellow diamonds (2.45 ctw), as well as a center yellow sapphire (1.29 carat). Yet, the designer didn’t forget about the practical side of jewelry either. Since Snodgrass envisioned his cocktail ring as something that would be worn to high-profile events, he made sure that it wouldn’t ruin the wearer’s clothing. He rounded off the corners of the petals, which also face downward for extra protection from getting caught on the material.

Another concern he had was about the ring being too top heavy. He decided to give it a split shank to lighten the metal, as well as a European-style shank to prevent the ring from turning on the finger.

Once he was happy with the finish on the petals, he assembled the ring. Having designed the top piece with a pedestal that fit into the bottom piece “like a peg head,” Snodgrass inserted the top directly into the base. He used a laser welder to tack the pieces together to ensure proper alignment before soldering them in place.

When selecting a stone for the center of his ring, Snodgrass settled on a yellow sapphire with a rich color that he felt would go well with the four yellow diamonds that he planned to discretely place where the bottom petals and the shank meet. Although not easily visible, the yellow diamonds help tie together the two-tone effect Snodgrass was trying to present.“It was just one extra step that could keep bringing the piece together as one.”

He had created the beads for the settings in CAD but before setting the diamonds, he added an undercut to each bead for an added touch of stone security, a trick he learned from Blaine Lewis of the New Approach School for Jewelers in Franklin, Tennessee. “The v-shaped cut in the side of the prong sandwiches the stone’s girdle,” he explains. “It is one extra way to add some more security.”

His hard work paid off. Snodgrass submitted the finished ring into the Missouri Jewelers Association Design Competition, where he wound up winning the Best of Show award. “Being my first year in the professional category, I was unsure where I would place,” he says. “When I was announced the winner, I was in complete surprise. [It] tells me I’m headed in the right direction in this industry.” 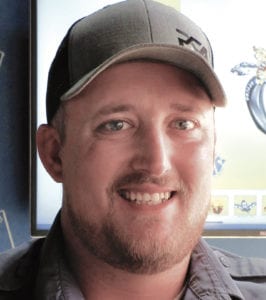 Although he’s only been making jewelry for four years, Snodgrass wasn’t too worried about the project being beyond his abilities. “There’s no one jeweler who can truly do everything and do it well,” he admits. “I was absolutely terrified that there may not be enough security for all the stones, or a catch area that could get snagged and cause damage. There were a few times where I wanted to change a few things but chose against it, knowing it would take away from the finished product. I have always believed in pushing one’s self further to get better. Sometimes we end up biting off more than we can chew, but it’s always a learning experience.”