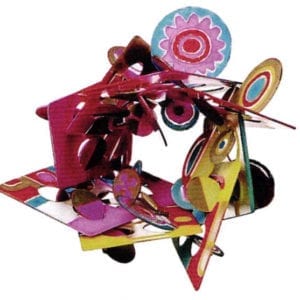 Plastic is not a cheap, surrogate material for her jewelry art in the eyes of the Berlin-based designer Svenja John. Instead, for years now, she has teased out of the painfully thin foil a bizarre complexity and airy gracefulness, which appears inexhaustible in its manifold variety. 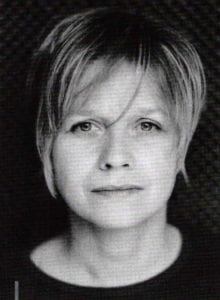 Artist or designer: Svenja John believes that both terms apply to her 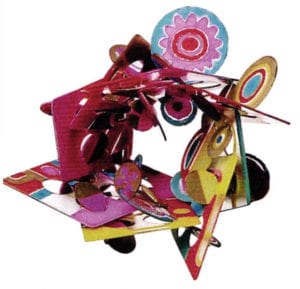 Svenja John’s first product that she marketed was the already legendary bracelet model “Bugi”, released in 1992 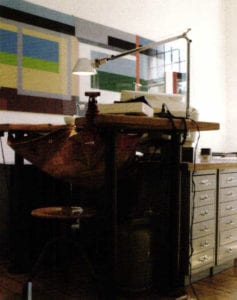 This is where the delicate artworks are created: the work table used by the Berlin-based designer Svenja John 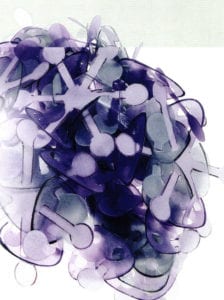 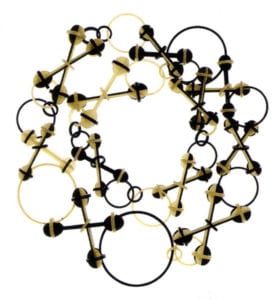 The development moves toward less different forms. Necklace “X001” from 2004

Roughly 14 years ago, when Svenja John started experimenting with making jewelry with the transparent plastic Makrolon®, it was entirely new and completely different with its inserted elements made of polycarbonate elements. Her first bracelet from the year 1992, which she lent the name ‘Bugi’, is still manufactured in individual pieces. Each year, roughly 100 pieces of the model type Bugi are still produced, whereby no one piece is identical to the other, and each arm jewelry is a unique piece. Indeed, this is true of every item of jewelry that leaves Svenja Johns studio. After all, the Duisburg-born artist processes each and every featherweight plastic element by hand: First of all, a template with the required elements is transferred on to the foil. Then it is cut out with scissors or with an extremely sharp water jet, then sanded down, dyed and painted to suit the matching form. And now, this is when she starts to intelligently insert together the individual elements, within which the swaddling foil is lent a surprisingly three-dimensional property. At the end of the day, it is the recognition and exploitation of the special characteristics of the foil material, its transparency, lightness and flexibility, that enables Svenja John to create such delicately featured and complex works of art. Inspired by the beauty of nature, she creates most bizarre and filigree bracelets, necklaces, brooches and earrings – translucent constructions with extreme stability and astonishing mobility. 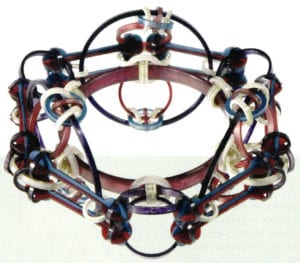 Ready for the museum: the model “Oxo” has been purchased by international museums, along with other John models 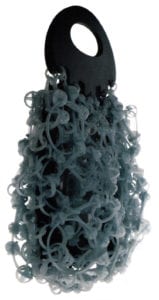 The network structure consisting of polycarbonate elements lends the handbag “Xoa” an inimitable identity. It was honored with the red dot award 2006 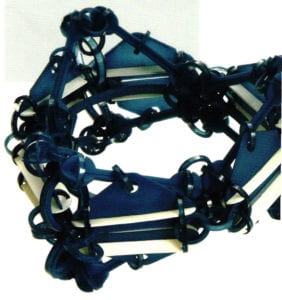 A confusing play between hand-made elements and technology: in the model “Altai”, a particularly thin foil and a special surface treatment confuse observers

Right from the start, the customer demand and the acceptance in art circles was significant. For example, from 1999 to 2001, Svenja John created jewelry for the Parisian fashion house Christian Lacroix, which the designer incorporated directly in his Haute Couture collections. For many years now, the qualified archaeologist and designer has received awards such as the Regional Prize for Design Handicrafts from the City of Berlin, the Munich Herbert Hofmann Prize in 2004 and the red dot award 2006 for her work. One also encounters Bugi, Oxo, Espina, Belitze or Anillo, as the filigree constructions are called, in international, public collections such as the Berlin Handicrafts Museum, the Hiko Mizuno Collection in Tokyo, the Hamburg Museum for Art and Crafts or the New York American Craft Museum. Svenja John has indeed been on show in a museum twice: 45 of her pieces were put on show by the Cologne Museum for Applied Art in an individual exhibition in 2004, while the Frankfurt Museum for Applied Art presented her work in 2006.

However, all of this success is no reason for the Berlin-based jewelry designer to rest on her laurels, but instead to seek the entirely surprising idea. Svenja John has honed her technique, and has succeeded for years in producing new jewelry objects with the same material and a variable insertion system. She is always interested in new languages of forms. which demand of observers the ability to see them constantly in unusual lights. “I am always looking into the future as a jewelry designer because constantly repeating what is known (and popular) is not enough for me,” says the Berlin-based artist. In this way, for example, the last few years have seen the creation of jewelry items such as Oxo or Altai made of particularly thin foil, whose special surface processing and matching coloring make them appear as if they were made of natural materials such as wood or coral. The confusing play between manual work and technology appears to be a particular pleasure for Svenja John. The geometric forms of her jewelry elements falsely indicate machine precision, although they represent to 100 % handiwork. Svenja John proceeds even more technoid and geometrically in her latest work, such as for example the necklace X001 dated 2004 or the bag Xoa, which was recently acclaimed with the red dot award. All elements – significantly more homogeneous in terms of basic forms than in the older models – are cut by water jet and put together to form three-dimensional structures. The optical attraction emerges from the colorfulness and the constant repetition, fascinating in its complexity. These extraordinary objects have their place somewhere between art and design, and they barely have anything in common with classic jewelry art. This prompted a Japanese journalist to comment: “Svenja John’s beautiful contemporary jewelry made me realize that a precious stone can be far less sparkling than a good idea.”

All articles by this author
Previous Makriyanni: Symbolic and Narrative
Next Field Experiment Collection
Social media