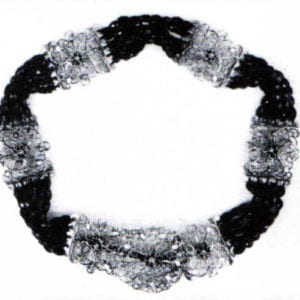 It does not enclose the precious object to conceal it, but to display it: the jewelry clasp. It protects against loss, but doesn’t refuse access. The history of the jewel clasp stretches back to time immemorial. It is only in recent times that the fastener has achieved a prominence as a decorative element in combination with intelligent mechanisms. 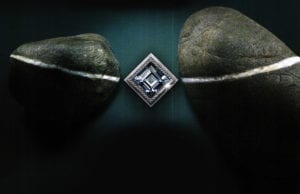 Clasp with aquamarine and brilliants by Jörg Heinz 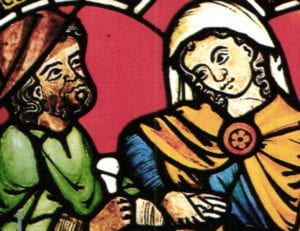 Disk fibula in the motive “Accomodating strangers” in the northern rose window at the Freiburger Münster, around 1250 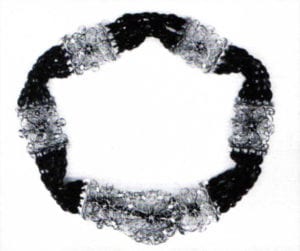 The first clasps were created when people first began to forge jewelry from metals. The most archaic form, two bent-over wire ends, was developed as early as the Bronze and Iron ages. It was to be thousands more years before the clasp was to migrate to the front of necklaces, as a decorative element in its own right.

The elevation of the clasp to an ornament in ancient times was due to an ingenious instrument that first combined form and function in an ideal manner. The ancient peoples of Eurasia invented the cloak pin, also known as the fibula. ‘Fibula’ is a Latin word which means ‘to pin’ or ‘to clip’. This metallic needle construction (consisting of pin, holder and clip) was used to hold clothing together, as well as for ornamental purposes. The oldest known clasp is a two-part, golden plate fibula from the Anatolian sovereign tomb of Alaca Hüyük (3rd century BC). In Europe, single and two-part forms were in use toward the end of the late Bronze age (14th/13th century BC). In imperial Roman times the eye fibula was important, also serving as a model for clasps in the Middle Ages, the final heyday of the cloak pin. In the falcon edition of the 13th century the Staufer Kaiser Friedrich II is seated on his throne, wearing a blue cloak held together at the neck by a round fibula. The goldsmiths of the Romanesque era designed their fibulas with gemstone inserts and niello ornamentation.

Ganoksin is sponsored by
th/13th century BC). In imperial Roman times the eye fibula was important, also serving as a model for clasps in the Middle Ages, the final heyday of the cloak pin. In the falcon edition of the 13th century the Staufer Kaiser Friedrich II is seated on his throne, wearing a blue cloak held together at the neck by a round fibula. The goldsmiths of the Romanesque era designed their fibulas with gemstone inserts and niello ornamentation. 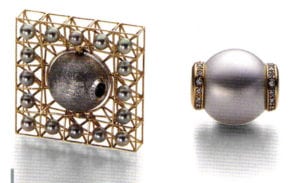 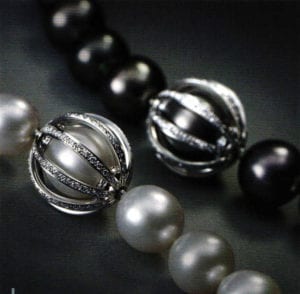 The closest relative of the fibula is the brooch, still familiar today. The brooch may be used as jewelry in its own right, or to hold things together, for example a collar, as well as assuming the function of a fibula. Early forms of brooches can be found in the Renaissance. Around 1900 the brooch experienced a second flowering, with the rise of Art Nouveau.

The belt buckle played an important role in the rise of the clasp to fully-fledged item of jewelry. Its prominent position across the stomach meant that fashion could not fail to avoid it. The fact that hands are much more agile in front of the body than behind it meant that there were never any doubts as to where the belt buckle was to be located. The stomach, in a number of eras an indication of wealth, was ideal for decoration. In the 19th century Biedermeier period belt clasps were heavily en vogue. These were often created in decorative wrought iron. A distinctive belt clasp from two interlinking lion’s head medallions was created by the Parisian goldsmith Rene Lalique around 1900. Lion’s heads are not typical of the forms employed by this prominent Art Nouveau jeweler, the motif was specified by the customer, who took the design from a door knocker. 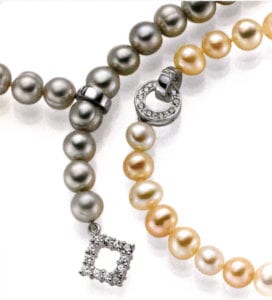 String of pearls with individually fashioned clasps made of white gold with brilliants by J. Köhle 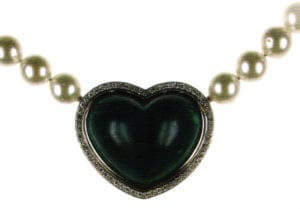 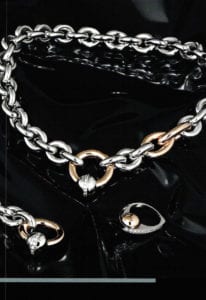 Jewelry set from the classical Herbstrith line. 18 karat white and rosé gold with brilliants. The clasps on the necklace and bracelet are so identically crafted that the bracelet can serve as an extension of the necklace 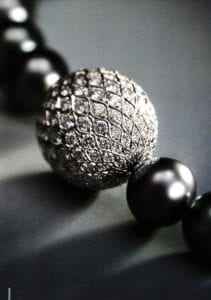 Pavée clasp made of 18 karat white gold by Jörg Heinz 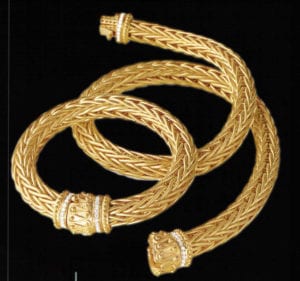 Bracelet with spring mechanism, Etruscan Collection in gold with diamonds by Le Pepita

Art Nouveau and the decorative opulence of Art Déco brought forth a wealth of new jewelry forms and varieties in the 20th century. The first front-closing jewelry appeared in the 19th century, an example being the “Halsbatti mit Roslistücken” from Switzerland. This choker, often found in traditional jewelry, has a central section that is more distinctive than the other sections. To ensure a design that was unencumbered by the clasp, it was simply covered by the central section. The Art Nouveau motif clasps saw a migration of the necklace fastener that had been concealed at the back of the neck for millennia to the front of the throat, as a conscious decorative element. Flowers, butterflies and flora and fauna in general were taken as motifs for the artistic fasteners. In the second half of the 20th century Jörg Heinz of Pforzheim launched the first jewelry clasp to be completely integrated into the design of necklaces. These clasps take the form of a variety of different ball or decorative elements in which the precise closure mechanism disappears completely. These solutions represent a complete, harmonious function, combined with the eternal requirement for an eye-catching object between neck and décollete.

The Herbstrith company, also from Pforzheim, offers smart technical solutions for its necklaces and bracelets, in which the clasp is in the foreground. In addition, more and more companies are employing magnetic clasps, which can be worn either in front or at the nape. The tendency toward longer chains is bringing with it new fastening methods, such as the V-fastener, in which the chain is not fastened at the end, but some distance above it, enabling one end to hang down freely. There are also numerous artistic methods of ensuring that the fastener need not be concealed at the nape.