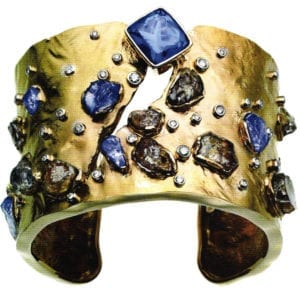 The history we are looking at here plays itself out at the foot of Kilimanjaro in East Africa. It unites a hobby perspector of Indian descent, a Massai tribesman and the world famous jewelers Tiffany & Co. The focus is on a fascinating stone that enchants people with its incomparable color: it is the story of tanzanite that will come to an end in a not too distant future. 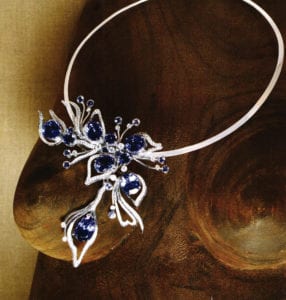 Like many of Ruth Grieco’s jewelry, this can be worn either around the neck or as a brooch. The tanzanite drop can be removed – but nevertheless, a river of shimmering blue tones remain, revealing tanzanite in all its variety. Diamonds and white gold

Named for Tanzania, its country of origin, and introduced to the world by Tiffany in 1969, tanzanite blends the blue of the ocean with shades of the midnight sky and flashes of violet. Drop earrings by Tiffany & Co.

The story starts in Tanzania, or more precisely: in the Merelani foothills of Kilimanjaro. This is where, just forty years ago in 1967, tanzanite was discovered for the first time. Legends suggest that it was a steppe fire caused by lightning and the heat it produced transformed the zoisite prevalent there into sparkling blue stones, which were subsequently collected by the Massai shepherds. Indeed, tanzanite is by no means an entirely new mineral, but instead a color variation of the known zoisite, which is why its gemological name is ‘blue zoisite’. However, even today, there is no precise knowledge of how this fascinating color tone is created; but it is caused by a rare confluence of different processes, in which the trace element vanadium plays a significant role.

There is also mystery surrounding who was the first to discover tanzanite. The most widespread variation of the discovery story is the one about the Massai and small mine owner Ali Juuya Watu, who is reputed to have found a tanzanite crystal at the foot of Kilimanjaro. He showed his find to the hobby prospector Manuel d’Souza, a tailor of Indian descent. He had actually been looking for rubies and believes he had discovered sapphires. Next of all, the tanzanite fell into the hands of the Scottish geologist Campbell R. Bridges, who was travelling through Tanzania on behalf of Tiffany & Co. It was then he who passed the blue gemstone on to New York, where it found the unadulterated enthusiasm of Henry B. Platt, great grandchild of the glass artist Louis Comfort Tiffany Platt summarily renamed the stone ‘tanzanite’, as the original term ‘zoisite’ reminded him too much of the word ‘suicide’. On the official market introduction in 1968, Platt declared “that this is the most beautiful blue gemstone found in over 2,000 years”. In the meantime, Ali Juuya Watu and d’Souza founded a joint venture that failed shortly afterwards and the two separated acrimoniously.

Additionally, d’Souza is reputed to have had around 80 percent of his tanzanite stolen before he had even laid eyes on it. There is no clarity to date whether one of the two could really count as the discoverer, and the claim to be the true holder of this title is a matter that is still being fought in court.

But whoever did discover tanzanite gave the world something very special: It is established fact that tanzanite is one thousand times rarer than diamonds – this truth alone makes the value of the blue stone spiral into unknown dimensions. Additionally, there is the circumstance that the deposits will probably be exhausted inside of ten years. Further research has shown that the blue zoisite is indeed only found in Tanzania across an area that only measures around 20 km2. 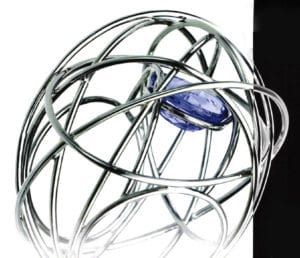 Laurence Ratinaud’s unique ring symbolizes the emergence of life. The egg made of white gold holds within itself life itself in the form of a tanzanite oval 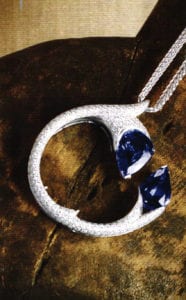 Maria Webster created this pendant for the British luxury brand Boodles. She drew inspiration from the unique bond between mother and child and uses the platinum and diamond’s in the jewelry to symbolize a mother’s protective arms

The gift of a lifetime

Tanzanites fascination comes from its intense blue shading and its exceptional brilliance. The captivating interchanges of color between deep blue, striking violet and beguiling burgundy red is due to a phenomenon known as pleochroism, in which the gemstone reveals different colors, depending on the angle from which it is viewed. In 2002, it was added to the list of birth stones for December – a list that has not been changed since 1912. In Tanzania, the blue miracle of a gemstone is indeed seen as the birth stone of them all. Traditionally, the Massai see the color blue as holy and spiritual, standing additionally for fertility. Women who had the honor of giving birth to a child are given blue clothing or pearls. These days, the Massai chiefs give mothers tanzanite on the birth of a child – as a symbol for a long, healthy life. 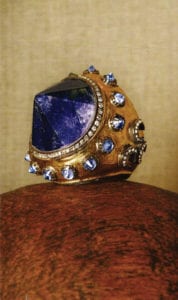 Sevan Bicakci drew inspiration for this extraordinary ring from the Tales of the Thousand and One Nights. Bicakci’s ring designed around the fantastic tanzanite with a hue of evergreen is a poem of diamonds, rough blue sapphires, yellow gold and sterling silver

Be born to tanzanite

Against this backdrop, the Tanzanite Foundation, which organizes its work under the motto ‘Be Born to Tanzanite’, created the Tanzanite Celebration of Life Jewelry Design Award in 2006. Independent designers, manufacturers, luxury brands, rising stars and designers for fashion, Accessories were called upon to contribute their ideas to the topic in connection with tanzanite. Designers from 20 countries followed the invitation. From all of the entries; a specialist jury selected 21 pieces of work, which travelled the world as part of an exhibition. The high quality items of jewelry, all very different in terms of design, are very impressively staged with items of everyday use from the homeland of the precious gemstone: Pipes, cutlery, masks or busts lend them the age-old tradition of the local populace. Jewelry by prominent designers such as Shaun Leane or Sevan Bicakci are equally on show as the rising stars James Powell or the independent designer Rodrigo Robson. They each show the topic of birth and life in their own way, and prove the highest standards of quality in terms of craft, aesthetic application and material – and tanzanite is always the striking centerpiece. 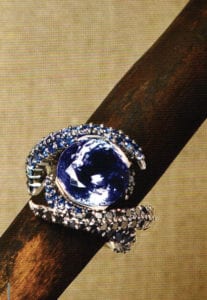 Shaun Leane’s breath taking ring shows a tanzanite stone that is enclosed by a string of blue sapphires. At the same time, the tanzanite is the link to exchangeable elements, encrusted either with white or black diamonds. 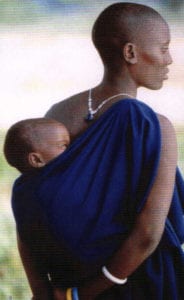 Marking the birth of a child, Massai women are given tanzanite by the chief. Seeing as the color blue is believed to be holy and spiritual, the gift is intended to provide the child with a healthy, positive and successful life 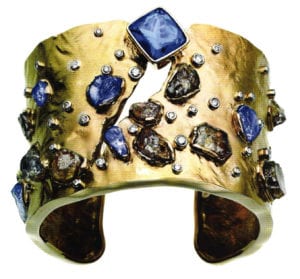 Ginny Dizon drew inspiration from the Massai legend that tanzanite was created by lightning and the consequent steppe fire. She celebrates this blue miracle of nature with her combination of cut and uncut tanzanite, diamonds and white gold 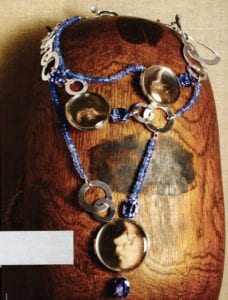 In its piece of jewelry ‘Start’, Rodrigo Robson submitted an extremely innovative and striking item of work: it is not until second glance that one notices genuine ultrasound images behind the cloudy looking pictures. Entwined chains and connections show the multifaceted ties between mother and child. Crystals and white gold