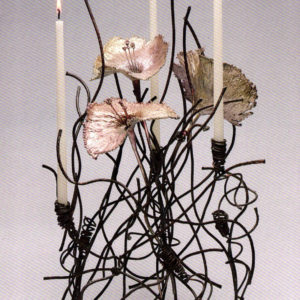 Susan Kingsley’s work has involved a long, determined struggle with the role of a woman artist in the field of jewelry and metalsmithing. In her new, introspective series of sculptures, she has turned to fashioning objects of utility that she characterizes as “Enlightened Embranglements.”

“Enlightened means informed, free from prejudice and ignorance, and given the light of truth and knowledge. Embranglement means a confusion and entanglement. I like the contradiction in this. I call the work enlightened because of its use of candlelight, while suggesting that the work is somehow full of truth and knowledge, and at the same time it is full of confusion.” 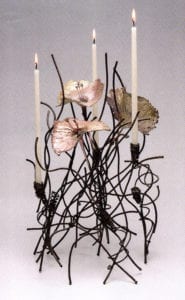 Susan Kingsley has always created pieces that read more as sculpture than ornaments. In the past, Kingsley’s works consisted of strange pods and flowers bursting with a creepy vitality. They did not resonate with any sun-soaked life of fecundity nor did they conjure a life of frivolity; rather, a bristly, threatening, ominous quality permeated each metallic creation.

In contrast, Kingsley’s most recent body of work assumes, at first glance, a quiet domesticity for one sees chandeliers, candelabras and small candleholders. These functional, candle-related sculptures contain only vestiges of the earlier works’ eeriness. But the new work was conceived in darkness, and it is in dim candlelight, the netherworld of shadows, that these embranglements best live.

Twisted and gnarled twigs and vines throw dancing shadows on walls, tables or ceiling. Tenuous and tenacious leaves and flowers, nestled within each tangle, seem to quiver with an inner life. The snarl of vines writhe to their own logic; the vigor of the natural forms intensifies in the maternal cloak of firelight. 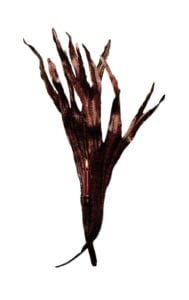 In these new pieces, the metal forms interact with sculptural space in provocative ways. With her characteristic mastery of materials, Kingsley has fashioned flowers, branches and tendrils in woven configurations that catalyze the surrounding space and cast dancing shadows. She surrenders to an involved process of observation, inspiration, fabrication and, finally, liberation. As each piece becomes whole, united with its crucial light source, it takes on a new life. The transitory flame flickers, the shadow pulses, sculptural space comes alive.

Kingsley collects weird and fascinating bits of the biological world: seaweed, dried flowers, leaves, shells, grasses, vines; mushrooms, roots and shoots populate a personal gallery of forms. These, pinned to a board or lying about in her studio, serve as prompters; templates mimic the natural world, and the bending and twisting of metal tubes and wires have proto-sources. As the artist pounds and hammers copper sheets cut from the templates, the “critter” board is there for guidance, inspiration. This correlation to the natural world infuses the embranglements with plausibility; from life they have sprung into a sculptural domain of form, space, light and shadow – evocation. 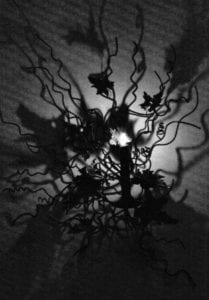 Natural flotsam and jetsam give birth to tangible forms, and more. Kingsley, as both creator and midwife, urges the metal components into shape, coaxes the forms into the electroplating baths, praises each piece under the buffer and grinder, applies lacquers and patinas, until the work emerges, complete. From the intangible realm of thought and inspiration the forms are manifested; as each sculpture is completed and candlelighted, the magic of art/life occurs, and the work returns to an ethereal, intangible state. It emotes, conjures, suggests, reminds. A full circle of process is complete.

Thus, on their own domestic terms, “Enlightened Entanglements” work as utilitarian and sculptural objects. This marriage of art form and function is made in place – suspended from the ceiling as chandelier, as candelabra and as sconcelike wall piece. In all, the strong structure of twigs, vines and tendrils interacts with the weightless state of leaves and blossoms, and the palpable shadows.

In Chandelier, the dynamic throng of linear forms serves as a palpitating support for the stabile, vertical thrusts of the candles. Echoing this verticality are three fuschialike blossoms dandling from branches, precious counterpoints to the gnarled tautness above. The shadows cast on the table surface below, vital parts of this kinetic sculpture, flicker and dance with the atmospheric breeze. 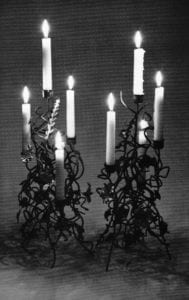 Candelabra and Enbranglement with Three Flowers appear as swirling masses of tendrils spiraling upward, culminating in the climactic flame. The linear dominance of each piece creates an anxiety – motion and chaos have just been frozen but might momentarily resume their frenzied affair with space.

Other works, Shadowy Embranglement, Staghorn and Sea Leaves, play a more conventional visual game as wall pieces: they may be seen as baroque paintings as much as dimensional dramas. Crafted so that the flame peeks out from behind the flat, fluttering, veined and long-leafed mass, the work triples in size and spectra as shadows are cast and the light burns away. Bold, noble shapes contrast to the flashy, illuminated surfaces – effects of which Caravaggio or Rembrandt might be proud. The dramatic light, so integral to the works’ success, engages and establishes a solid sense of movement, of “becoming.”

Kingsley has refined the eerie, threatening characteristics of previous works into dramas wherein her signature forms, in concert with shadows, unfold for the viewer (or diners). They invite the viewer to experience, rather than challenging the viewer to scrutinize; they do not confront. These concrete forms of vines, branches, tendrils and leaves explore the abstract realm of movement, light and the everpresent shadow.

Rick Deragon is currently the art critic for The Herald, a daily newspaper in Monterey, California, and a contributing writer for Artweek. He is the former Curator at the Monterey Peninsula Museum of Art and has served on the art faculty at California State University, Chico.

All articles by this author
Previous The Enamelwork of Jamie Bennett
Next Mac McCall: Wizard of Ambiguity
Social media