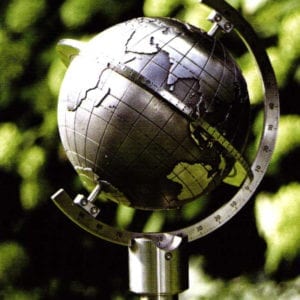 How the Sun Tells Time

The measurement of time has passed through many stages. From water clocks and candle clocks, hour glasses and clockwork through to quartz timepieces and radio watches. However, the first consideration was how the position of the sun could be used to determine the time of day. 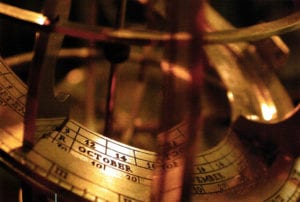 Hand-made armillary sphere made of brass by Martin Brunold. It represents an abstract, geocentric picture of the world in which the ecliptics are woven in 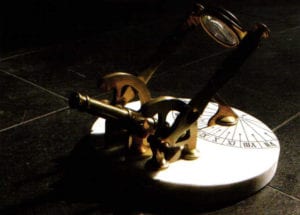 The Midday Cannon was once a gag for prosperous people. It was loaded with gunpowder and fitted with a slow match wick. The sun ignited it through the magnifying glass on the stroke of midday, therefore giving the signal for luncheon 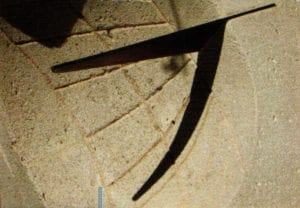 This precise reproduction of a Roman trough is made of shell limestone. The dial follows the inner contours of a ball and can be seen as a portrayal of the firmament above us. In addition to the hour lines, it also has horizontal lines that mark the equinoxes and the winter and summer solstices 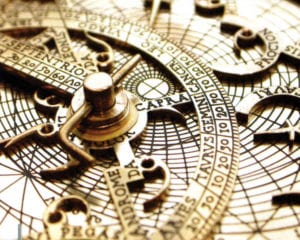 Hand-made astrolabe in brass from Martin Brunold’s studio: It was used to navigate at sea and represents the stars in the sky revolving along the horizon. Each pointer in the so-called “Rete” represents a star

Do you know how romantic dates were organized 5,000 years ago? By simply measuring one’s own shadow against the foot. “Visit me when your shadow measures six feet…” was what people said to arrange a date. It is unlikely that the meetings were very punctual seeing that the size of peoples’ bodies and feet were just as different then as they are now. It is no surprise that further improvement was necessary. Accordingly, priests in the early culture of the Middle East discovered that a pole embedded in the ground will cast a shadow that gradually moves forward in a measurable manner. These simple “shadow casters” were the predecessors to the sun dials. 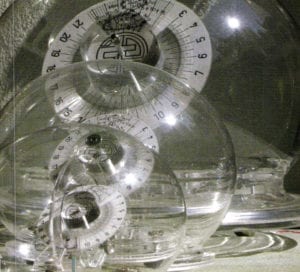 The modern sundial by the German firm Meku is a so-called light-hand clock. The sunlight is bundled through a cylindrical lens and focused on a dial 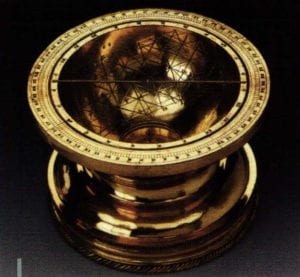 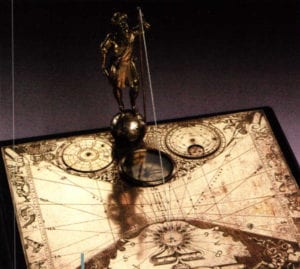 The high tech invention of the dawning age of our culture rapidly spread. It was known in China even earlier than 2,500 BC, and the technology was also found in Egypt, India and among the Incas. The Egyptian obelisks acted as sun dials. The Babylonians divided the surface across which the shadow wandered into segments and assigned numbers to each segment. The Greeks also used sundials. In 200 BC. Erasthothenes of Kyrene calculated the circumference of the earth using two sundials located 800 kilometers apart with astonishing accuracy even by today’s standards. Time was not measured at night. Attempts to create a stardial failed. Instead, the sundials were refined and miniaturized over the course of the centuries to such an extent that genteel Romans even possessed travel sundials. This was the first step in measuring time constantly, regardless of where one was located. 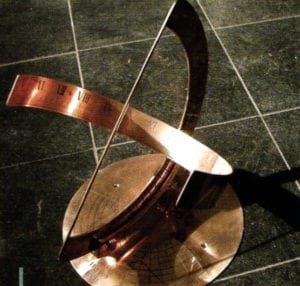 Silas Higgon is an English manufacturer of sundials; it makes classic models made of metal 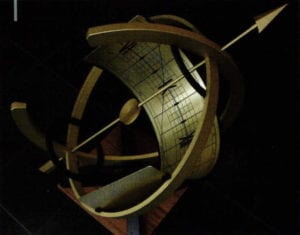 Gübelin clock, fashioned in aluminum, milled and anodized. The design is by Martha Widmer, who designed for Gübelin Schmuck during the sixties and regularly took home prices 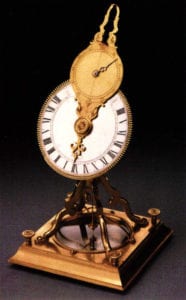 There are various different forms of sundial. The hollow-ball sundial, also known as skaphe, was developed in Alexandria as early as the 3rd century BC. Originally in the form of a hemisphere, it was transformed into a quarter sphere and was widespread and found in different styles above all in the Roman Empire. All public squares in every city had facilities for telling the time. Skaphes were used in Arabian states right through to the 10th century. They display so-called temporal hours. The day is divided into twelve equal parts from sunrise to sunset, so that the hours of the day last different lengths over the course of the year and can only be compared with our modern understanding of hours when day and night last for equal periods. 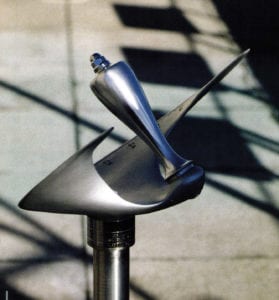 Precision sundial according to Martin Bernhardt, 1965: Calculation and construction by W. Schreiner, 1997. Sundial garden in the German Museum 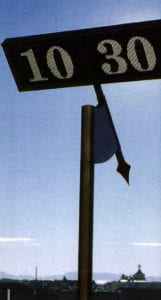 The church scholar Beda, a Benedictine monk from the North of England, laid the foundation in his writings for calculating time. They formed the basis for the canonical sundials. These are round or hemispherical structures on vertical surfaces, usually with even segmenting. A rod in the center point positioned at right angles to the wall casts the shadow; they also have multiple segments. Monks in the Middle Ages used them to organize their days and above all to adhere precisely to the prayer times. The shadow of the rod positioned in the center of the circle at right angles to the wall conveys a primitive division of the day, as the passage of the shadow from one sector to the next changes practically every day due to the angle of the sun and the various seasons. 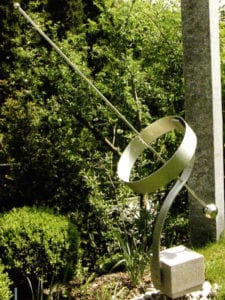 Upright sundial, named after the Greek Goddess of the Earth, Gaya. The clock is being manufactured by the German architect Heiko Ley and Guido Kürten using stainless steel 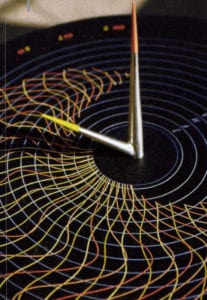 The discovery of America revealed to Europeans that Central and Southern American cultures used specific measurement facilities for astronomical purposes. For example the Stone of the Sun in Mexico, or the Calendar Stone of Macho Picchu in Peru. The sundial outlived all other clocks used in antiquity and the Middle Ages. Even when clockwork emerged in the 13th and 14th centuries, the sundial was used for a long time to check the accuracy of the mechanical clocks. Even into the nineteen forties of the last century the polish Railway used a sundial to compare the chronographs in the railway stations.

Ganoksin is sponsored by
th centuries, the sundial was used for a long time to check the accuracy of the mechanical clocks. Even into the nineteen forties of the last century the polish Railway used a sundial to compare the chronographs in the railway stations. 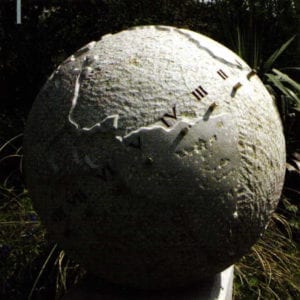 Globe clock, fashioned stone: It can not only tell the sun time accurately, it also displays impressively how the sun shines on the earth over the course of a day, where it is day and night and what the terms “summer” and “winter” actually mean 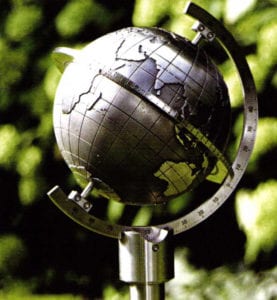 The fact that their development continued into the 20th century and will most likely continue can be seen in the example of the patented Bifilar sundial developed by the German astronomer Heinrich Michnick in 1923. Two threads cast a shadow on a matt glass pane, in which hour curves have been scratched, so that the point where the shadows cross denotes the hour. In 1965, Martin Bernhardt invented a technically refined, precision sundial. It has a bat-shaped shadow display, which also includes the time equation. Central European time can be read directly on the wing-like scale. However, the bat must be replaced at the different solstices; its fat end points down from December to June and up from July to December. 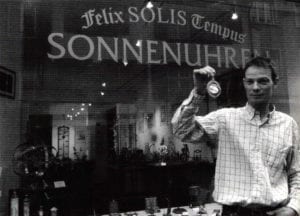 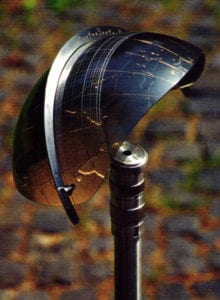 A digital sundial? Also available. It was patented by Hans and Daniel Scharstein and Werner Krotz-Foge under the number 44 31 817; installed on the roof of the German Museum in Munich, it displays the time in intervals of one minute. It functions with the aid of two parallel slot frames. One of them grids the sunlight evenly into thin stripes. The light pattern falls on a second frame, on which all displayed numbers are also arranged in slim stripes. They are interwoven in such a way that the slim stripes of light from all parts only ever illuminate one number. Depending on the position of the sun, hours and minutes are made visible in this way in a form of moiré on the matt glass pane located behind. 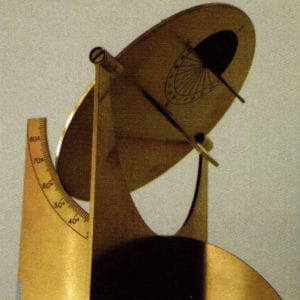 The sundial “Helios” was made by the German engineer Carlo Heller. It is calculated and manufactured individually for each site and displays the time with a previously unachieved precision

One of the world’s most precise sundials is also on show in the German Clock Museum in Furtwangen. It was designed by Ives Opizzo, an expert living in Germany. The precious precision clock was built with an electronic theodolit. Offering almost to the second precision, the expectation placed in it were even exceeded.