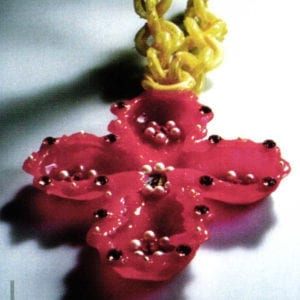 There are a lot of goldsmiths and jewelry designers out there who would state unequivocally that the Faculty of Jewelry and Everday Object Design at the Pforzheim University of Applied Science was an important step in their development as jewelry creators. The intense phase of a creative and comprehensive course of studies in particular leaves its marks in the work and perhaps also the perosn, and helps to forge identity even years later. 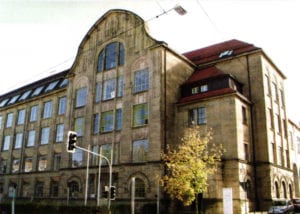 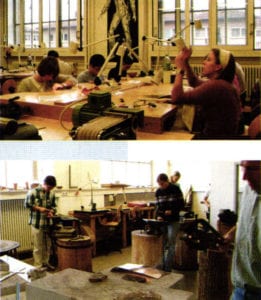 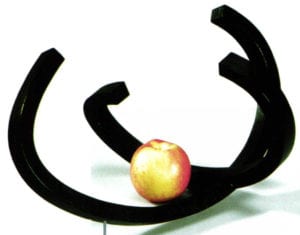 A wood bowl by Christina Scmitt

The jewelry institution Pforzheim University of Applied Science and former Art College can look back on over 125 years of tradition. Established initially in the 19th century as a crafts school and college for the metalworking industry, the College of Design developed in several stages, starting in 1971, from the subsequent art and crafts school. Within a municipal environment dominated by the jewelry industry it developed to become an education center for design, offering courses in fashion, graphic design and industrial design in addition to the jewelry classes. The course in Jewelry and Everyday Object Design is still the best known subject. In the early years, the dominant figures in the Pforzheim school were the goldsmiths Reinhold Reiling, Klaus Ulrich and Herman Stark. Individual jewelry art rose to the foreground in this period, most certainly in order to make a distinction to the “faceless” jewelry production in the jewelry industry. Many renowned persons have studied at the Art and Crafts School and at the College of Design. The list is endless, including names such as Claus Bury, Robert Smit, Onno Boekhoudt, Manfred Bischoff and Wilhelm Mattar. Many of the younger generation managed to set up business for themselves and present their own jewelry work in galleries and at trade fairs. A tight network of students and teachers has emerged over the years, and a generation of lecturers, teachers and professors has spread to other centers of education. 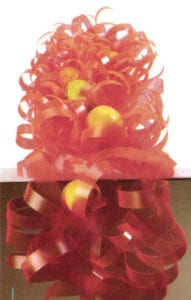 An object made of plastic strips for storage by Katrin Rohde 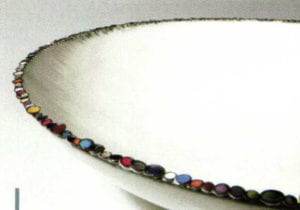 An enameled bowl by Claudia Milic

Over all these years, the structure of the Faculty of Jewelry and Everyday Object Design has kept pace with the changing demands in jewelry design, production conditions and the opportunities for marketing. In addition to all the creativity, the greatest possible degree of reality is more important than ever. Three professors are in charge of the jewelry classes, divided into eight groups over the half-year semesters. Jens-Rudiger Lorenzen has looked after the jewelry students since 1985, while Johanna Dahm from Zurich replaced Klaus Ullrich in 1989. Lorenzen, who himself studied at the Art and Crafts School in Pforzheim and later became lecturer at the State Drawing Academy in Hanau, is known for his jewelry, wearable objects that appear almost like miniature sculptures. Johanna Dahm comes from the Zurich school and has risen to prominence on the back of numerous individual and group exhibitions on an international parquet since 1973. Johanna Dahm maintains many international contacts to other jewelry education centers around the world for the benefit of the course of studies, and she promotes student exchange programs with international universities. Christine Lüdeke joined the team of professors in 2001; she successfully applied for the third chair after teaching and providing graduation support at the Faculty of Jewelry and Everyday Object Design in Pforzheim. She is an industrial designer, and completed the Master of Industrial Design at the Domus Academy in Milan in 1989. 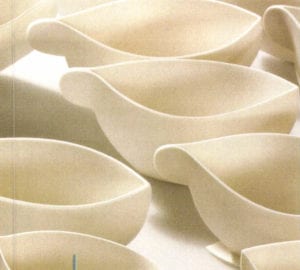 Cups made of porcelain by Mirjam Hiller 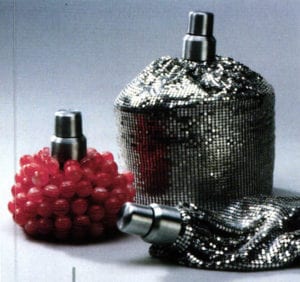 Johanna Dahm and Jens-Rüdiger Lorenzen mainly teach the students, who number up to eight in one semester, how to design unique and artistic jewelry but they do leave a lot of freedom for series design Christine Lüdeke looks after the course in Equipment; nowadays, this means more than forged, silver pots for a coffee set For Lüdeke, “Everyday Object” means designing objects that are used in everyday culture. This may be containers of all kinds, crockery and cutlery given a new significance or a re-interpretation of household tools Christine Ludeke places great importance on handling and the technology applied to the new materials, for example working with porcelain or with a selection from the wealth of plastics. Series design is well-suited to the subject of Everyday Object; it sees itself as a connecting link between the tradition of jewelry design and modern product culture. 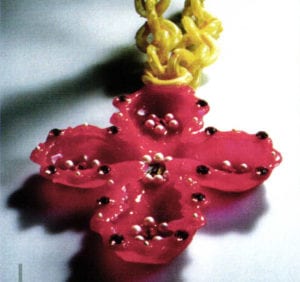 A chain for the Pope made of latex, PVC and pearls by Caro Weiss

Johanna Dahm speaks of jewelry types: individual pieces, series jewelry or multiples and also mass jewelry. She sees the question of which kind of these types the students will focus on and what will be the topic as being one of personal preference. Students, both males and females, should be able to approach the multi-layered levels of significance and design possibilities. For Jens-Rüdiger Lorenzen, “making jewelry” means focusing on the general and personal presentation of culture, time and society and to recognize the superficial trends. He believes that jewelry has very special characteristics. All members of the team of professors are intent on recognizing and fostering the students’ skills and on making sure that the young talents get a good grounding for their professional careers, At the end of the four-year course, the young designers should be in a position to design contemporary-style jewelry and equipment forms and also draw up trendsetting concepts. 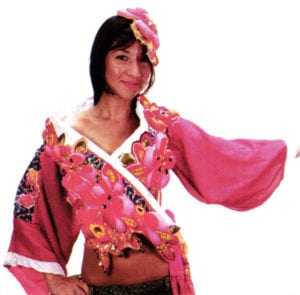 The Jewelry and Fashion Project, Kimono by Natalie Hahn

Practical coursework is the main thrust of the entire course of studies, continuing throughout all semesters. Over the course of a semester, each student develops his or her own jewelry work, covering all areas from the idea and concept to the final production. In view of the fact that all students must have completed an apprenticeship as gold or silversmith in order to be admitted, although an internship of at least one year may be accepted, the requirements placed in the students are more or less the same in terms of lending structure and form to an idea. During the first three semesters, the triumvirate of professors provides an introduction to the basics of project work. As early as the fourth semester, students are allowed to select the project and the tutoring professor themselves. This independently managed semester is a good preparation for the fifth, the practical study semester. During this six-month internship, students are incorporated in the company procedures in jewelry manufactories, and also in atelier and jewelry gallery work. Students have a lot of freedom to experiment with different combinations of jewelry and equipment until they submit their graduation piece in the eighth semester. In addition to techniques of freehand presentation, the technical subjects have for a few years now included an introduction to the basics of Computer Aided Design, known in brief as CAD. Under the specialist instruction of qualified designers, students learn how to handle a mouse in the well-equipped laboratories. Within this framework, students can pass through all opportunities offered by design in two and three-dimensional space and can also become acquainted with the progress from a virtual model to rapid prototyping. The entire process chain from the design, construction, rendering and animation, through to the prototype production is practiced on a design task that the students define themselves. The goldsmith and silversmith studios are equally well furnished. Students can find at all fifty workstations all of the tools and equipment required for traditional goldsmith work and modern production techniques. Interdisciplinary components are added to the simple design of jewelry. Roughly one third of the courses on offer are artistic in nature, including painting, sculpture, digital media and freehand drawing. The theoretical part is enriched by lectures on the science of art and design. Participation in competitions, tandem projects with industrial partners and exchange programs with jewelry schools around the world is seen as obligatory. Joint critical and self-critical discussions between professors and students are equally indispensable. The wealth of topics and projects will always provide an occasion to exchange opinions during experimental design in an artistic framework and also in specialist project work within the Faculty of Jewelry and Everyday Object Design. 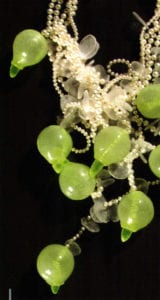 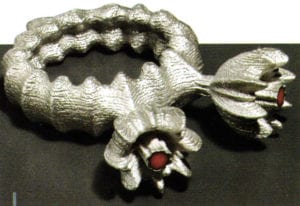 A silver ring according to a CAD design by Till Baacke

All articles by this author
Previous Alex Fritsch: Design Quality for Inexpensive Prices
Next Power and Magic of Babylonian Gemstones
Social media