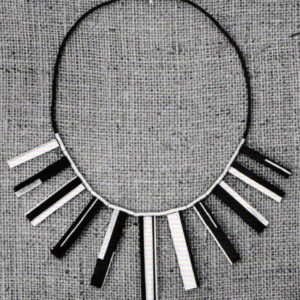 Sculptor, jeweler, teacher, pioneer in large-scale studio metal casting, Byron Wilson has just turned 73 years-of-age. He is a fascinating man, recalling his own past, as well as that of the studio-jewelry movement in northern California in the early 1950s.

The picture of Byron Wilson drawn for me by his many admiring students of a modest, warm, giving and caring teacher – one who never imposed his own style but allowed each student to develop his or her esthetic sense. Kim Bass, a former student of Wilson’s at California College of Arts and Crafts (CCAC), where he taught for 26 years, recalled that for two years she didn’t even know what kind of work he did, as he never brought it to class, now wanting to create clones of himself. In fact, he was such an infusive instructor most students took Wilson’s class over and over again. His was the only jewelry class that Bass took during her four years at CCAC, and upon graduating, she was chided that she should “receive her degree in Byron, not metals.” Although Wilson taught casting techniques much of his own work was constructed, and he encouraged her to do what she wanted, which was fabrication.

Bill Baran-Mickle, another former student, reminisced about Wilson’s classroom critiques, noting that Wilson was so broad in his approach that if one brought in a tire for a project, Wilson would critique it. He was also fascinated by gadgets and problem-solving. He taught foundry techniques, as well as sandcasting of small sculpture, jewelry construction and casting. Wilson often improvised tools and machinery and was referred to as the “gadget man” by a colleague at school.

Soon after Wilson joined the CCAC faculty in 1956, he found himself with a group of students who wanted to do large metal casts, but there was no money for the necessary equipment. So, they started from scratch and, under Wilson’s tutelage, built a metal sculpture foundry, mostly from scavenged materials. For 15 years they kept improving on their technical know-how and built bigger and better blast furnaces, overhead cranes, burn-out furnaces, etc., until a new, modern, commercial facility for large-scale casting was finally built on campus. Consequently, this was not Wilson’s most prolific period for jewelrymaking, as he worked full-time at CCAC as well as holding down a job with the railroad. 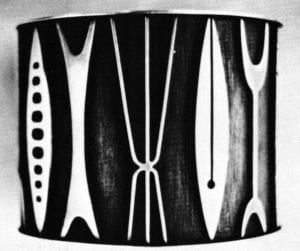 After graduation from high school in northern California, in 1936 (where he entertained ideas of going into advertising), Wilson got a job as an illustrator, but although most of his colleagues went to work for Walt Disney, he wanted to express himself three dimensionally in metal. However, the acquisition of basic metalsmithing skills was almost impossible for him. Wilson began trying his hand at jewelrymaking about 1940. But like so many other studio-jewelry pioneers, he couldn’t find a school that taught fundamental techniques, and the only source books available were antiquated ones from the 1920s. Finally, he met a dental technician who was willing to teach him how to cast, and he picked up the rudiments of soldering and knowledge of various tools from commercial jewelry repairmen in Oakland. Until he met them, Wilson recalls that he was soldering with an alcohol lamp and blowpipe. The repairmen introduced him to the prestolite and things became easier. In about 1941, Wilson began doing jewelry repair work for antique shops because he needed the money. His own work was also well underway. Stylistically, this early work was primitive, mostly pre-Columbian in its general form and in its inclusion of turquoise and obsidian (much like the early jewelry of Margaret de Patta). 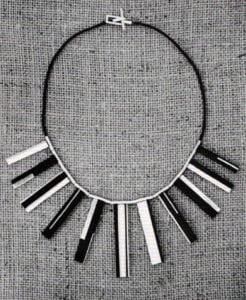 The turning point of Wilson’s career came in the late 1940s with his introduction to Margaret de Patta and the founding of the Metal Arts Guild (MAG). In the mid-1940s a friend showed him a brochure illustrating de Patta’s jewelry. Wilson was struck by the similarities to his own work. Around the same time, he also heard Peter Macchiarini (another San Francisco jeweler) interviewed on the radio. The number of jewelers working independently in the Bay Area was surprisingly large. The need for an organization to help promote studio jewelry in northern California, as well as a forum to share technical expertise and practical information, was clear. In 1951, about 50 metalsmiths met for the first time as a group in San Francisco. Among the first members were “leaders” Margaret de Patta, Caroline Rosene and Peter Macchiarini (who eventually left the organization due to philosophical differences with de Patta), as well as Florence Resnikoff, Merry Renk, Irena Brynner, Dorothy Greene, Kay Lane, Fred Snowden, Martin Streich, Victor Ries, Milton Cavagnaro, Keith Monroe and Harry Dixon. 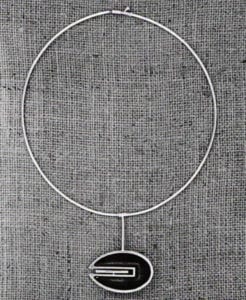 Wilson cannot say enough about his debt to Margaret de Patta. Their mature work is similar in its common constructivist roots. Yet Wilson’s style is often more lyrical, occasionally leaning towards an abstract narrative rather than complete nonrepresentation. The viewer can sometimes perceive animal or vegetable allusions (Figures 1 and 2). And Wilson’s jewelry is more concerned with surface treatment, while de Patta’s explores interior space and optical illusion. Several pieces, such as a silver, ebony and ivory necklace consisting of slender linear elements that recall piano keys (Figure 3), are closer in concept to Macchiarini’s (see Metalsmith, Winter 89, p. 34) than to de Patta’s. And Wilson, along with Macchiarini, was one of the first jewelers to experiment with silver combined with diverse materials such as wood, ivory and bone. But Wilson reveres de Patta and praises her role as “teacher” to the MAG membership.

The meetings were actually critiques headed by de Patta. She, after all, had a solid foundation in design, having studied with Laszlo Moholy-Nagy at the School of Design in Chicago in the early 1940. According to Wilson, de Patta didn’t talk much, but she was able to “get things going… She would question what you [and your designs] were about.” She fostered a competitive spirit among the guild members, which Wilson believes spurred him on to new solutions for old design problems, e.g., trying to make a rectangle read as an ellipse (Figure 4). 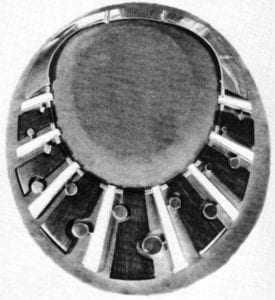 Most metalsmiths were working with wire and sheet in the early 1950s. Very little casting was being done. Bob Winston was probably one of the few who had been experimenting with cire perdu. Wilson turned, for inspiration, to de Patta, who along with her husband, Eugene Bielawski, had set up an operation to do limited production with lost-wax casting at their old farmhouse in Napa. The couple held open-houses on Sundays, where jewelers were invited to discuss the craft and share their knowledge. Both de Patta and Wilson believed in creating a viable business out of jewelrymaking, and Wilson relates how they would sit in de Patta’s garden and discuss casting (which Wilson had actually helped her and Bielawski implement at their farmhouse) and its commercial applications.

Wilson believed that jewelers should be able to make a living with their work. And although there was not much opportunity to sell studio jewelry in California in the late 1940s and early 1950s, he was indefatigable in seeking outlets for his work. He found stores from San Diego to Seattle and was probably responsible for introducing handcrafted jewelry to many people on the West Coast.

By the early 1950s, Wilson was becoming an important force in the California studio-jewelry movement and was showing at several exhibitions and fairs. Among others, he exhibited in the San Francisco Art Festivals and the Richmond Annual Exhibition of Watercolor, Graphic and Decorative Arts during the 50s, 60s and 70s; the “American Federation of Art Traveling Exhibit of California Craftsmen” in 1952 and 53; “Fiber, Clay and Metal” (St. Paul Art Gallery, St. Paul, Minnesota) in 1953 and 55; “American Jewelry and Related Objects” (Memorial Art Gallery, University of Rochester, Rochester, New York) in 1956; Inaugural Exhibition (Museum of Contemporary Crafts, New York, N.Y.) in 1956; “Craftsmanship in a Changing World” (Smithsonian Institution Traveling Exhibition) in 1956 and 57; and “The Metal Experience,” (Oakland Museum, Oakland, California) in 1971. 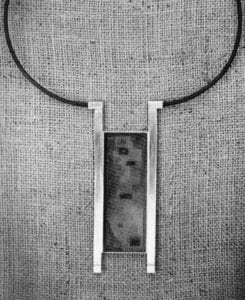 Necklace, silver, colored acylic, 1970; one of the last pieces that Wilson made

Byron Wilson was a craftsmen who consistently tried to “reinvent the wheel” – perennially seeking novel ways to solve design problems, create new tools and handle a variety of materials a little differently. He believed in helping metalsmiths to be small businessmen – to compete with the jewelry industry and produce personal adornment that was not too “arty” but that would be fairly priced and appeal to a great number of people. He epitomizes the studio jewelry of the 1940s, who, through sheer force of will and sense of commitment, overcame the odds and helps establish what we acknowledge as a movement.

The author wishes to thank William Baran-Mickle, Florence Resnikoff and Kim Bass for their generous help in the preparation of this article.

All articles by this author
Previous Galerie Jocelyne Gobeil
Next From The Bench: Kohler Company
Social media