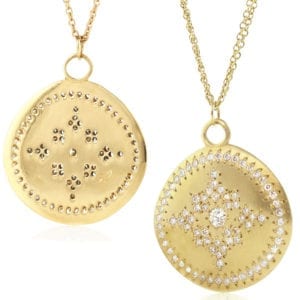 We’re all nostalgic for something. Usually, it’s reminiscence from our childhood, as in Adel Chefridi’s case. Chefridi, owner of Adel Chefridi Studio in Kingston, New York, fondly recalls his boyhood wanderings through the ruins of Carthage. If his Nostalgia pendant reminds you of an ancient coin, it’s because searching for these prized finds was one of his favorite pastimes growing up, and their aesthetic remained with him.

Just like the ruins that inspired it ,the pendant is somewhat flawed, albeit intentionally. Chefridi insisted on fashioning a shape that wasn’t perfectly round .He wanted it to be organic and graceful. After some initial drawings, he took his idea to CAD, using the software to help him perfect and visualize the shape as well as precisely arrange the eight clusters of diamonds.

Once he was satisfied with the layout, he began carving the pendant out of wax ,using a graver to achieve the imperfectly perfect effect that allowed him to convey a feeling rather than present a stiff “museum piece.” A needle file then helped him create a natural flow to the curvature and smoothed out the shape further until the desired look was achieved.

Then, to allow for easier cleaning, Chefridi drilled holes into the wax all the way through the piece, marking the stone locations. He explains that diamonds love coating themselves in body oils, whose accumulation ultimately deposits on the backs of the stones, dulling their appearance .Access points behind the stones allow them to be cleaned easily .He cast the pendant in 18k yellow gold, carefully cleaning it while taking care not to ruin the subtle details of the curvature. Chefridi accomplished this by using a combination of coarse and fine files as well as fine sandpaper to smooth out the piece. 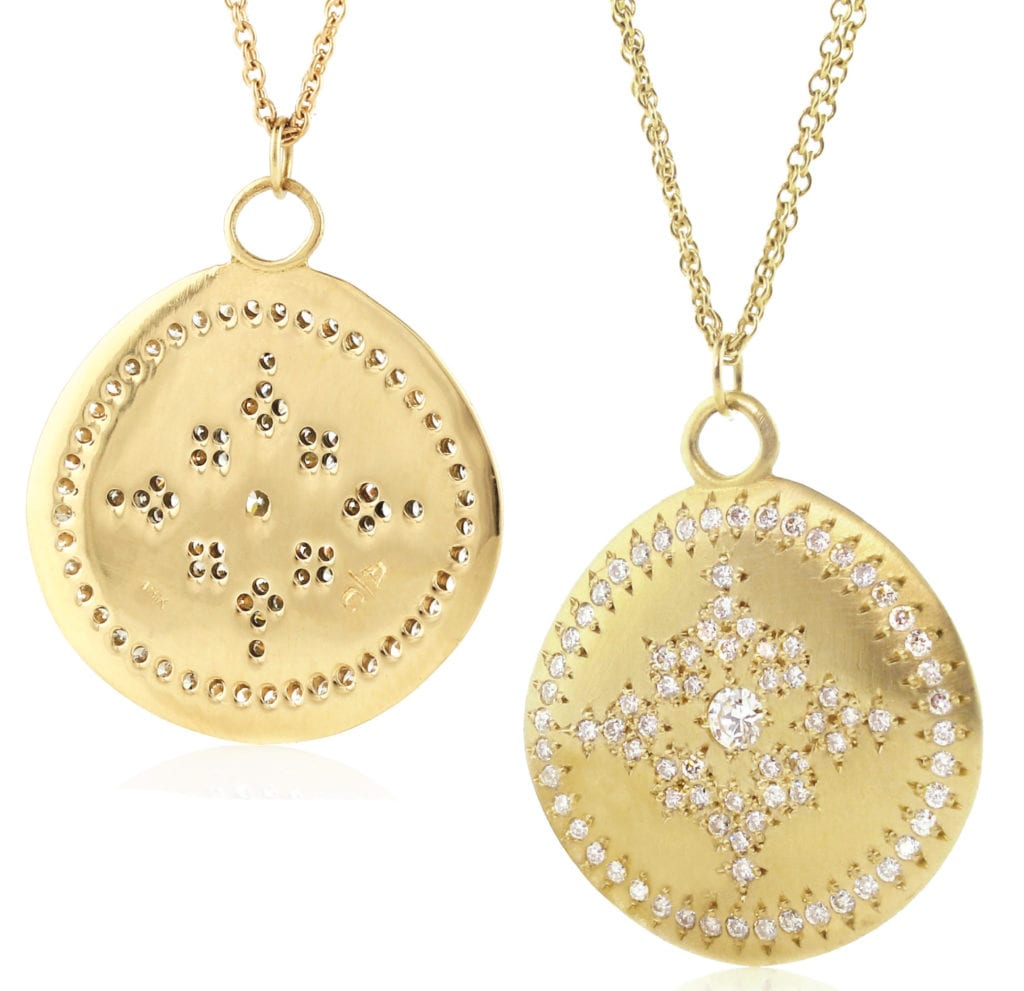 The most time-consuming step was setting the stones because the diamonds were of different sizes, requiring him to match each seat to a specific stone. To fashion the seats, Chefridi used round and flame (bud) burs. Even though the next step doesn’t enhance any visible part of the piece, Chefridi took the time to “counter-sink” the holes to create spherical, uniform opening sand give a brighter finish to the base of the jewelry. “I take a round bur that’s bigger than the hole and clean the hole with it.” Chefridi thinks that this extra touch makes the holes look like pretty, gradual openings from the underside. He believes that even the hidden parts need to be attractive, resulting in a piece that’s entirely refined. He then inserted the diamonds pushing down on them with a brass rod to ensure a tight fit. The challenge was to seat all of them at the same level. Since the surface dips in and out, he had to be sure that the diamond table follow edits flow. He then used a graver to cut beads to hold the stones in place.

To wrap up, he applied a satin finish to the front and a mirror polish to the back. The satin finish adds to the imperfect feel, with its fine scratches that tone down the luster and allow the gold to remain in the background. Chefridi says that this step “removes the conflict between the shine of the gold and the shine of the diamonds.” After all, he intended the diamonds to serve as a burst of light. He hopes that, when someone looks at the pendant, the person will notice the shine, not the individual stones.

Hung on a double chain, the pendant reflects the majesty of the grand city, as well as the wonder of the curious boy. For Chefridi, the emotions this piece evokes are the essence of its appeal. He believes that when we like something, we’re drawn to the object because it confirms one of our memories, “it reminds us of something we are already in love with.”

Chefridi believes that when we like something, we’re drawn to the object because it confirms one of our memories, “it reminds us of something we are already in love with.”

Chefridi created bead settings to secure the diamonds in the pendant As he used a graver to create the beaded prongs, Chefridi made exaggerated graver marks in the gold. “I don’t hide them, but make them look intentional,” he says. “Sometimes, like in this pendant, I like to show off the graver marks.”