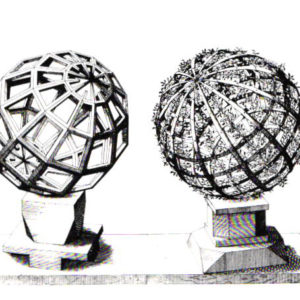 This article is one of a series of articles from Metalsmith Magazine “Art and Technics” talking about techniques in craftsmanship and design.  For this 1991 Spring issue, Curtis K. LaFollette talks about Wenzel Jamnizer.

On October 12, 1984, I was attending a conference on mathematics, “Visualizing Higher Dimensions,” at Brown University. As I was about to enter Sayles Hall to hear a paper presented by Rudy Rucker on “The Further Adventures of A Square”, a colleague handed me a stack of photocopies with illustrations of some of the weirdest geometry I had ever encountered. That was my introduction to Wenzel Jamnizer (1508-1585). As I examined the reproductions later that day, it became clear why they had been given to me. A number of the platonic solids had been skeletonized, so that as his text describes them they were “see-throughable.” These engravings bore an eerie resemblance to the neoconstructivist sculpture I was producing in steel and aluminum at that time.

I wanted to know more, but the text was in an archaic southern German dialect. Fortunately, Professor Bob Warnock from Brown University was familiar with the dialect and provided me with invaluable translations. It was then possible for me to evaluate Jamnizer’s contributions to the Northern Renaissance.

Wenzel Jamnizer was born in Vienna but moved in 1534 to Nurenberg, where he became a master goldsmith. He executed many praiseworthy commissions For the German Imperial Court and was especially adept at the production of high relief on vessels through the use of repoussé. He was respected as a master among masters at a time when Nurenberg was the preeminent center for goldsmithing in the German-speaking principalities. He was also instrumental in the development of the table clock, a 16th-century German innovation. In addition, he was a skilled bronze caster who maintained the continuity of the German tradition of sculpture until the mid-century mark when he began to adopt the court mannerist style typical of most of the rest of Europe. He also developed a reputation, as Albrecht Durer had before him, as a keen theorist, sharing in the development of the intellectual life of northern Europe. He was equally interested in Euclidean geometry, which had disappeared from the European consciousness during the Middle Ages, and Perspective, the quintessential development of the Renaissance.

The development of perspective can be traced all the way back to the 11th century, when Alhazen, a mathematician, writing in Toledo, recognized the fundamental error of Ptolemaic perception theory. Unlike Ptolemy, he states correctly that light reflects from an object to the eye, whence it is perceived. Alhazen’s Optics was translated by Lorenzo Ghiberti in the 15th century and the foundation for perspective was laid. Alberti published Della Pittura in 1435, and Piero della Francesca followed in about 1482 with his De Prospectiva Pingendi. In 1506 Durer traveled to Italy to learn “the secret art of perspective” from the study provided by these Renaissance masters. 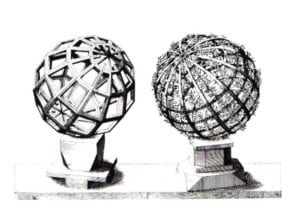 Durer (1471-1528) was another Nurenberger who had studied goldsmithing before he became a printmaker and painter. He had reached the height of his esthetic and intellectual power while Jamnizer was still working to become a master. Durer’s work in perspective was published posthumously in 1532, the same year Jamnizer achieved his master status.

With the publication of Perspectiva Corporum Regularium in 1568, Jamnizer demonstrates his mastery of geometry and perspective. While he uses conventional mathematical procedures of truncation and stellation, he transcends the production of simple mathematical models in the innovative way he applies the processes. He has also succeeded in creating a strong dynamic tension between the implied kinetic energy of the figures and the stability of their bases.

Perhaps the most eccentric of these figures are the “see-throughable” globes, two of which are reproduced here. The one on the left is a masterful rendering of structural elements. Most interesting is the interruption of the structure as elements converge at the poles, creating an opportunity for some visual variety as well as a better look at the inside of the form, while at the same time clearly violating the purity of the mathematical model. The figure on the right reflects an ever greater deviation from mathematics. A strange concoction of latitudes and longitudes trellising biomorphic vines, it is totally unclassifiable.

There were others who continued to tinker with the Jamnizer perspective apparatus, and those who continued to develop mathematical objects in and around Nurenberg during the 16th century, but no one else produced a volume of such elegance. Nor was there another work from this period that so succinctly summarized the accumulated knowledge of perspective or geometry. Jamnizer remains a significant intellectual and esthetic figure, an exemplary goldsmith.

Thanks to Bob Warnock, a professor in the German Department at Brown University for his translations of the Jamnizer texts.

Curtis K. LaFollette is Professor of Art at Rhode Island College in Providence.