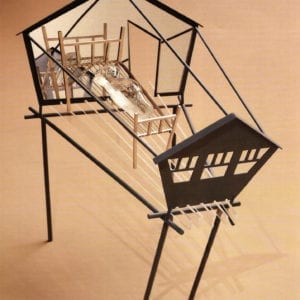 Janice Kluge’s houses combine personal metaphor, primal symbol and contemporary commentary on domestic issues. In her mixed media constructions, she combines found objects with industrial and precious materials while manipulating perspective, color, texture and scale to create a subjective visual language that, coupled with a limited number of recognizable images, stimulates a dialogue with the viewer and results in a multi-leveled meaning for the work.

The pedimented rectangle still functions as the archetypal symbol of the home in Western culture. Visually simple, it is a complex symbol that represents the dichotomies inherent in the subject’s religious, social, psychological and historical development: home/house, shrine/shelter, womb/tomb, refuge/prison, inside/outside, unconscious/conscious, spiritual/physical, soul/body. Janice Kluge employs the house as a metaphor for the female soul/body. The house functions as a physical container for the expression of her feelings. The result is a personal metaphor.

According to the artist, her work is “autobiographical and abstracted from actual experiences reflecting emotions, relationships, places and changes.” These houses are self-portraits that express feelings that are diametrically opposed: joy and sorrow, ecstasy and depression, reverence and violation. A comparison of the turbulent upheaval of a “blasted” house like Distorted Kitchen (1984) with the serene sanctity of Patron Saint From Kluge’s 1989 “icon” series reveals the variety and complexity possible of Kluge’s work. 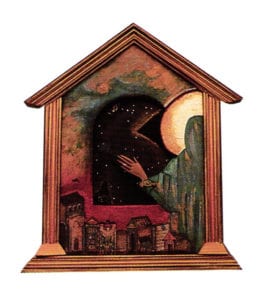 Like the sculptor Louise Bourgeois, whose Femme-Maison (Woman-House) is also an image of the house as a metaphor for the female soul/body, Kluge employs amorphous biomorphic forms or partial figures to indicate the human presence. At times she also includes chairs, ladders or birds to symbolize the human soul. The absence of human figuration results in an image that is both gendered and genderless, ambiguous, opened rather than closed to further interpretation.

Although Kluge acknowledges and pays homage to both Rousseau (Adam and Eve Diptych, 1988) and Giacometti (Then She Was Gone, 1989), she is not a neosurrealist but an eclectic. Categorizing her use of art historical sources as spiritual (reliquaries, icons), political (Edward Kienholz, Leon Golub) and personal (Van Gogh’s bedrooms, Giacometti and certain “primitives” or folk artists), she contends that her work is related more to literary criticism than art criticism.

Kluge also refers to her literary sources as spiritual (the Bible), political (newspapers) and personal (women writers such as Margaret Atwood, Ann Beattie, Amy Tan and Anne Tyler). The domestic stories and novels of contemporary female writers seem particularly influential in terms of “style.” Novelists like Atwood and Tan utilize obsessive description in their intimate exploration of the emotional and historical worlds of their heroines. A parallel can be found in Kluge’s careful manipulation of details such as color, material, technique and scale to focus on the poetic elements of image, meaning, narrative and metaphor. 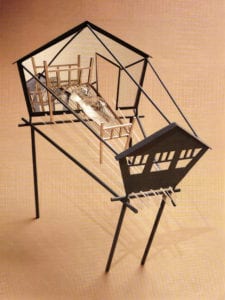 One Cold Night (1984) combines feelings of anxiety, claustrophobia, isolation and entrapment. These sensations are the result of a meticulous attention to detail, resulting in a certain preciousness. The house, a skeletal creature on trembling legs, becomes the stage for some cataclysmic trauma. The diagonal perspective stretches and compresses the space. This acuity is enhanced by sharp-edged pieces of Plexiglas that serve as floorboards. Inside, lying upon a narrow bed designed for torture rather than dreams, is an inert, globular form, a piece of sandblasted glass found on the floor of the glass studio of the artist’s husband. It becomes the perfect metaphor for the cast-off woman. The silver wall that mirrors the room further enhances the cold loneliness and isolation of the feminine form. The small scale establishes an immediate intimacy with the viewer, negating any sense of voyeurism.

These qualities of intimacy and empathy are not lost when scale and space are made architectural and public. Stars Fell (1990) was commissioned by the state of Alabama for one of the art-designated rotunda spaces in the state building. Although the title refers to a book about Alabama’s destiny, the work can be interpreted in terms of human destiny. In this case, it refers specifically to Kluge’s choice to move from the Midwest and make a new home in Alabama. A schematic metal outline drawing of a house is attached to the wall. Thus, the architecture becomes part of the work. Falling from the sky through the roof is an unfurled piece of titanium which in its color and texture could be described as painterly. Resembling cloth rather than metal, it forms a carpeted pathway to the stars. Inside the house, a single chair is attached to a glass door upon which is a stylized silhouette of the artist standing on the threshold. The empty chair, which appears in other works, is a metaphor for waiting and isolation. In this instance, however, the empty chair may be the “place” waiting for the artist/viewer. 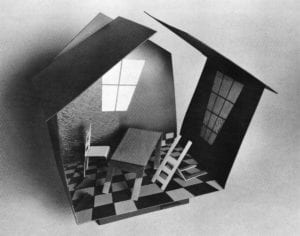 A political interpretation of the houses is also possible. Although Kluge’s images are universal rather than stereotypical, the feminist issues raised by her use of the house and domestic objects are inescapable. Since the early 1970s the house, housewife and domestic objects have been used in feminist art and literature to focus on socio-political and economic issues in the lives of American women. During the 1970s, in both the fine arts and mass media, the house/housewife was a metaphor for women’s fate and biological and economic struggle. In the 1980s this same image became an icon of domesticity – an image of security and the object of nostalgic yearning for the lost American dream. Suburban and domestic imagery was found in the art of both men and women. What was originally a feminine stereotype became genderless. Kluge’s houses reflect this change and can be attributed to the multi-level meanings and readings that she encourages in her work. 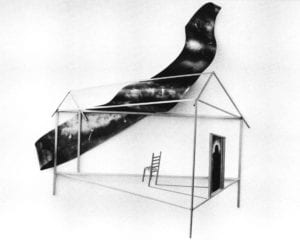 Filled with personal emotion and universal meaning, Kluge’s houses are disquieting in their emptiness. Her work has the sense of an odyssey, perhaps a search for an image to fill the house-shrine. At the end of Amy Tan’s The Kitchen God’s Wife, Winnie says, “I am looking for a goddess that no one knows. Maybe she does not exist.” Janice Kluge also searches for that image that will define her place in the world.

Bronze clay as a substrate for vitreous enamels

How do I make my drawn wire smooth?

How to smooth edges of blanks?